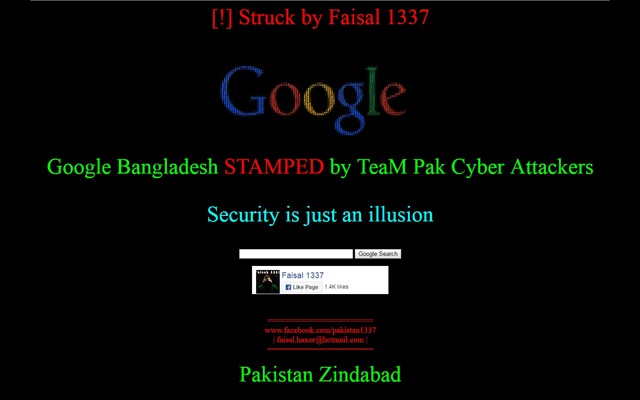 Internet users in Bangladesh had not been able to access the search engine Google since Tuesday morning.

If you tried to go “google.com.bd”, a black screen appeared with a message on it which says “Google Bangladesh STAMPED by Team Pak Cyber Attackers” along with “security is just an illusion” below it and “Pakistan Zindabad” at the bottom.

The hackers even identified themselves at the hacked page with a message that says “Struck by Faisal 1337”.

Not just that, there’s also a link to hacker’s Facebook page given there along with the hacker’s email ID.

A lot of screenshots of that have been posted across social media by now with different kinds of comments on it.

Google, after the cyber-attack, did allow Bangladeshi users to access www.google.com.

The hackers redirected the information for “google.com.bd“ on BTCL’s DNS entry so the users would end up on different pages whenever they try to access Google Bangladesh.

“There had been a problem, which has been fixed” said Director (PR) Mir Mohammad Morshed.