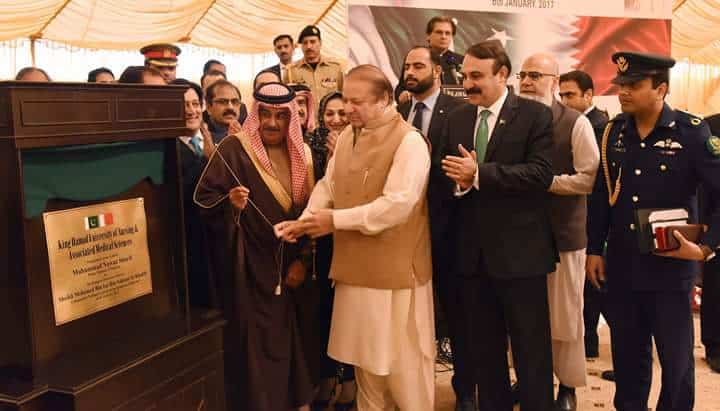 The foundations of a nursing university were laid by Prime Minister Nawaz Sharif in Islamabad today.

The King Hamad University of Nursing and Associated Medical Sciences is going to be established in Chak Shehzad with help from Bahrain. The university will be affiliated with Royal College of Surgeons, Ireland.

The Prime Minister thanked the Government of Bahrain as well as King Hamad for this much needed generosity and help they offered in supporting the establishment of this university.

“This is reflective of leadership of Bahrain’s love for the people of Pakistan and its commitment to help improve the quality of life of our people” said the Prime Minister.

The Prime Minister said that the said university would help fill a crucial gap in the healthcare field as trained and qualified nurses are not in abundance and this project would help overcome shortage of nurses.

He said this would be a major step forward regarding the development of the healthcare sector.

He also said that the university will bring quality nursing care and raise the level of health standards in the country.

PM Nawaz Sharif said that healthcare is the Government’s top priority and it has introduced major reforms and initiated projects focusing on the poor population.

He then announced the construction of fifty new state-of-the-art hospitals in the areas with high population throughout the country.

“The programme is unprecedented in terms of its magnitude and is being implemented in a phased manner and would provide coverage to 100 million people eventually. Work in this regard is being undertaken expeditiously.” – PM Nawaz

Moreover, the Prime Minister mentioned the National Immunisation program which provides free of cost vaccines to every Pakistani mother and child. He said that this program’s coverage has been a major success and it is taking constant steps forward for the minimization of spread of polio.