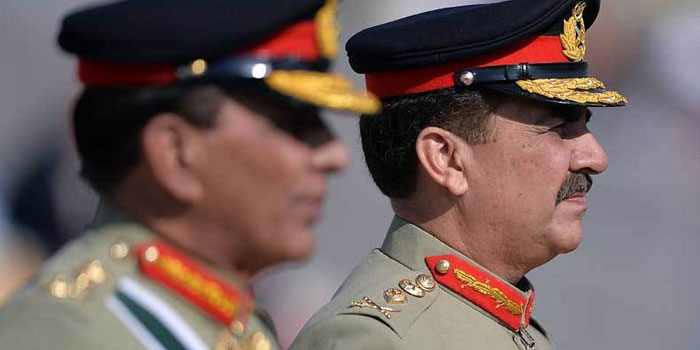 The Former Chief of Army Staff (COAS), General (retd) Raheel Sharif, voiced his opinions during a panel discussion at the World Economic Forum in Davos, Switzerland.

He was invited by the WEF’s Executive Chairman, Professor Klaus Schwab, to speak at two sessions held on January 17th and highlight Pakistan’s counter-insurgency operations and its role in eliminating terrorism.

The discussion was about “ Terrorism in the Digital Age”. It focused on the fragmented struggles against Al Qaeda, Daesh (ISIS) and Boko Haram; and about responsible leadership in international security.

Speaking at the session, Sharif shared his experience with Zarb e Azb, leading a major strike against local and foreign militants and urged for a unified front against insurgents.

In response to the question on ways to counter terrorism in the digital age, Sharif responded that,

Intelligence sharing is key to success against terrorism. That’s very very important. If there is intelligence shared, actionable intelligence, and countries work and act on it, I think they can bring a difference.

Social networking sites provide the easiest and quickest way to connect with masses and infiltrate their minds with hate. A series of extremist content is continuously been uploaded on multiple sites that is easily view-able online and triggers vengeful sentiments.

Apart from providing access to a wider audience, the availability of sophisticated digital networks enables them to monitor global activities and plan attacks.

Moreover, the entire process is skillfully operated with the involvement of a professional network of financiers, abettors, facilitators and sympathizers.

Sharif also emphasized the need of cross-border communication to restrict militant movement and successfully cut off their resources. In his views, a global effort to track and target militants using the same technological tools against them can prove more fruitful than placing the blame on specific nations and urging them to ‘Do More’.