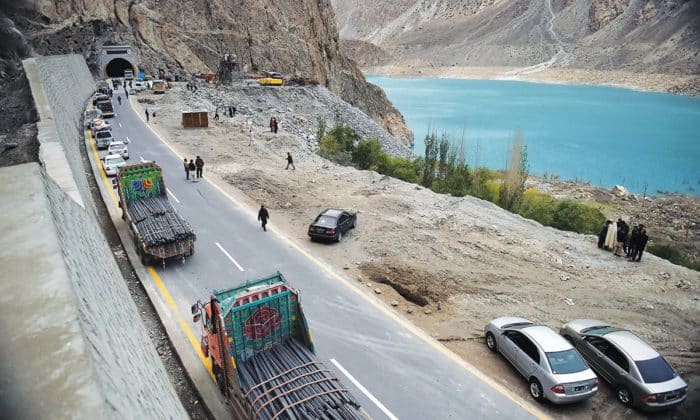 CPEC, the economic corridor that promises to unleash endless possibilities for the growth and development of Pakistan, is a collection of projects aimed to facilitate overland trade.

The projects are expected to boost the country’s infrastructure by laying down a network of railways, optical fiber, pipelines and highways connecting Kashgar to Gwadar, as well as strengthen and expand economic links between Pakistan and the People’s Republic of China.

Still ongoing, the flagship project has started a major debate among the global community and many countries have shown interest in joining CPEC. Developing interest to join the project has been welcomed by both China and Pakistan as it encourages possibilities of global trade and better external relations.

We take a look at the list of countries which have expressed their intent to become part of the CPEC.

Some Central Asian Republics have declared their intentions to enter CPEC as it can prove a game changer for the continent and allow easy connectivity between countries for trade and development.

Under China’s “One Belt, One Road” initiative, multiple projects have already been completed to link it with Central Asian states. Future plans to construct extensive railroads and land crossings blend well with the on-going projects under CPEC. The success of these projects will provide Central Asian Republics a route to access Pakistan’s deepwater ports, by passing Afghanistan.

Iran’s backing of the project and growing interest was expressed by Iranian President, Hassan Rouhani when he met Prime Minister, Nawaz Sharif in September 2016. He appreciated the positive bilateral relations between the two countries and showed his willingness to join the multi-billion project.

Later, Minister for Planning, Development and Reform, Ahsan Iqbal also revealed that Saudi Arabia desires to become part of the CPEC framework and will be cordially welcomed to promote brotherly ties between the two countries.

In an attempt to extend cooperation in multiple sectors and formulate a stronger bond, Russia wants to join hands and utilize the CPEC route for trade.

The Russian decision comes as a great opportunity to encourage bilateral relations and promote trade within the region. Pakistan has already granted Russia access to Gwadar port for its exports and hopes to grasp further chances for mutual cooperation.

U.K. Secretary of State for Foreign and Commonwealth Affairs, Boris Johnson was all praises for the potential Pakistan holds in his last visit to the country. He urged UK investors to turn to Pakistan and participate in various projects.

Calling CPEC “a wonder project”, Johnson hoped that the UK will join the ranks and invest in the growing economy. Following United Kingdom’s departure from the EU, they will need an alternative market for their goods and CPEC with its promising benefits seems the perfect platform for their investments.

Aside from UK, France and Turkey have voiced their eagerness to join CPEC. Jean Marc Fenet, head of the Embassy of France’s Regional Economic Department for India and South Asia on her last visit to Pakistan, expressed her country’s interest in the $54 billion project. With France’s inclusion in CPEC, her country’s advanced technology and expertise can help boost Pakistan’s economy.

Romania, is also among the EU nations keen to become part of the CPEC project, owing to its speculated expansion and visible outreach. The country further plans to introduce its Dacia Cars in Pakistan and invest in different sectors.

With the addition of EU nations in the Pak-China corridor, the economic boost would prove to be phenomenal for Pakistan.

The project has come as a gift for Pakistan and given birth to countless future possibilities. A country that had been targeted by the international media for being unsafe is now appraised as a budding economy.

Promising jobs and an unprecedented growth in the economy, CPEC is indeed a golden opportunity for Pakistan to regain its geographical importance and attract foreign investments.