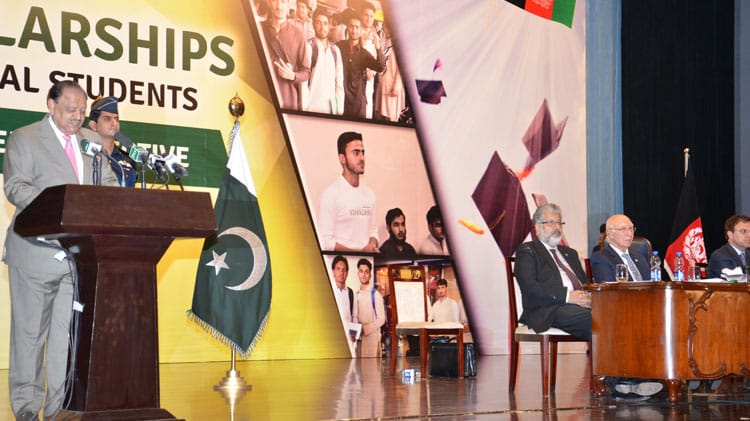 In his address, Mr. Mamnoon Hussain congratulated the Afghan students on availing scholarships to study in Pakistani institutions. He emphasized that the relations between Pakistan and Afghanistan extend beyond geographical affinity well into social, cultural, ethnic and business bonds.

“We were brothers; we are brothers; and we will remain brothers in all times to come,” he underlined.

He hoped that the students will feel at home while pursuing their studies in Pakistan and will go back to serve their country. “You are expected to serve your beloved country and inspire good bilateral relations between Pakistan and Afghanistan besides becoming ambassadors of Pakistan in your country,” he urged the students.

The President said the purpose of award of scholarships to Afghan students is to provide them with the same opportunities of acquiring higher education which are being extended to Pakistani students and develop and progress jointly.

He observed that the region has been facing a great ‘human tragedy’ during the last three decades, however the two nations have fought the unrest and chaos courageously. He stressed the need for promoting mutual trust and foiling the nefarious designs of elements striving to create misunderstandings between the two friendly countries.

Mr. Sartaj Aziz termed the award of scholarships a milestone in the bilateral relations and said the Government of Pakistan will continue to support Afghanistan.

He said Pakistan highly values its relations with Afghanistan, adding that the mutual relations are thriving despite challenges.

Speaking on the occasion, Mrs. Fareeda Mohmand termed the students an asset for Afghanistan who will construct the country. “Afghanistan needs you, your potential and skills,” she maintained. She appreciated the efforts of HEC for provision of such opportunities to Afghan students and hoped that academic collaboration will bring the two nations closer.

Welcoming the Afghan Minister, Vice Chancellors and other dignitaries to Pakistan, Prof. Dr. Mukhtar Ahmed highlighted the achievements of HEC with regard to promotion of higher education in Pakistan.

He said the Government of Pakistan is putting resources for the uplift of higher education sector, adding that the number of universities has reached 182, while quality of education in Pakistan is being recognized in the world.

“We want to transfer the fruits of these achievements to Afghanistan,” he underlined. He assured that Pakistan will continue to take such steps for the bright future of Afghan students and HEC will extend all-out cooperation in this regard.

He informed that the completion of this project will be followed by another phase of award of 3000 scholarships to Afghan students including postgraduate students. He hoped these students will play their vital role in the socio-economic development of Afghanistan.