A Pakistani mental-genius has set a new world record by setting the fastest time to identify all the elements in the periodic table.

We have often heard the phrase “Pakistanis don’t lack in talent”. Some of us have even made a habit of uttering this whenever we hear of someone from our country showing off his or her prowess in any field of life. However, it’s not just talent that makes one stand out. There is much more that goes behind every “overnight success” that we fail to grasp. 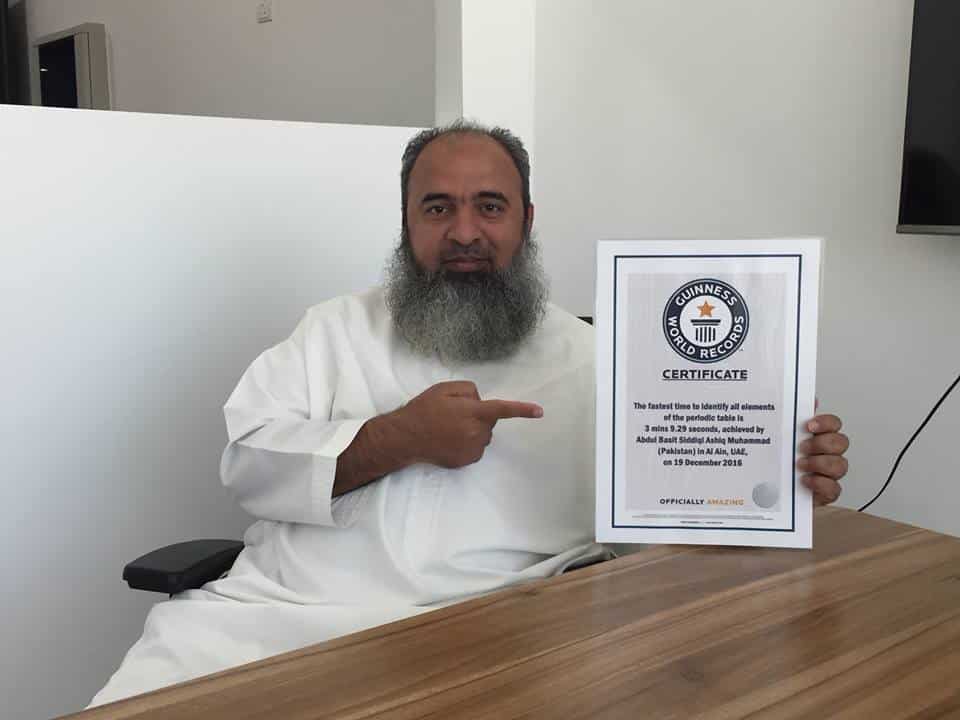 Abdul Basit was born in Jeddah, in Saudia Arabia. He studied in the Pakistani Embassy School Jeddah till grade 3 and then moved to Pakistan. He did a private B.A. from Bahauddin Zakaria University, Multan, and then went on to get an MBA (MIS) degree from IBA.

From the very start, Abdul Basit was interested in numbers and mental calculations. He loved the ability to use just his mind to solve problems.

“In mental calculations, I am not anything like a genius but from my childhood, I was pretty good at it,” says Abdul Basit. “I touched pretty much every field, science, commerce, arts. But the subjects with numbers, I liked the most,”

Married and a father to three kids, he came to Dubai in 2004 and now works as a mental-calculations and memory trainer. Last year, Abdul Basit decided to attempt the record of identifying all the elements in the periodic table just to “inspire his students”.

He just wanted to set an example for his students to follow.

He got in touch with Guinness World Records, the renowned record-keeper of some of the most incredible as well as the most bizarre things mankind has done. Anyone can apply for it and it takes around 12 weeks for them to process it, after which they tell you if they accepted it or not. If they do accept it, you can pay and have their adjudicator (judge) come to you or you can attempt without paying and send them the video and photographic evidence.

On the 19th of December, 2016, in the city of Al Ain, UAE, Abdul Basit attempted and succeeded in setting the fastest time for correctly identifying all the elements in the periodic table. He achieved this feat in just 3 minutes and 9.29 seconds. 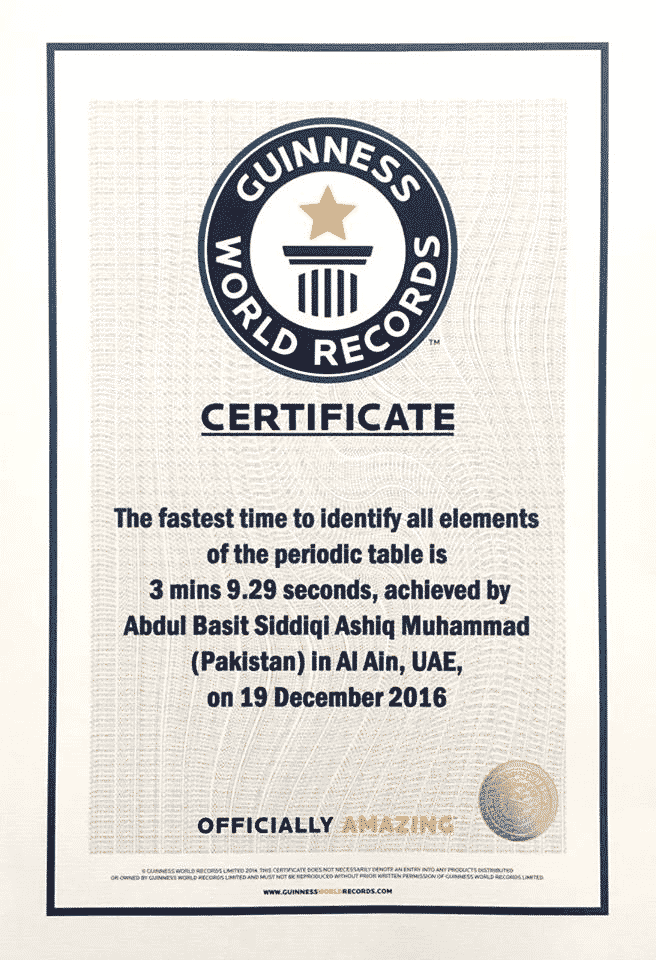 Abdul Basit has no interest in Chemistry whatsoever. He just used his skill in learning and crunching information with his brain to smash this record. Although it took him four months of practice, even then this record wasn’t as easy as he has made it seem. He has been playing with numbers in his mind since he was just a little kid. Moreover, he has gone through a life full of hardships just for his love for it. We got in touch with him and here is what we found out.

After completing his degree, he had started an academy in Karachi with a friend. He enjoyed the teaching, but not the business part of managing an academy. In 2004, he left the academy, sold off his shares to his partner, and came to Dubai. However, even here, he struggled to find a suitable career which he could actually enjoy.

“I left 4 different jobs. Not because they let me go. Because I quit. I resigned from each job. Because I wasn’t enjoying what I was doing. I wasn’t happy. That was not what I love to do. I wanted to teach and inspire students.”

He also went to a number of universities and schools but none of them were interested in hiring him for his skills. For 10 years, he struggled as his financial situation kept deteriorating.

Finally, he ended up creating his very own YouTube channel by the name of “NumerTainment” where he teaches his students to master the art of mental calculations.

“Where I teach nowadays, it’s an American institute. I teach students how to get the answer within seconds, with writing 1 or maximum 2 lines,” he shared about his current job. “They love it. They shout and scream with excitement. The normal response is, “why were these methods not taught to us before?””

For the near future, Abdul Basit has some really ambitious goals. He plans to break a new world record in a different category every 6 months! He also says that he will gladly help anyone who wants to become a Guinness world record holder and provide them all the guidance they need for the application procedure. Lastly, he is planning to approach local schools, colleges, universities again for free presentations to inspire their students and increase his community of learners on his channel.

There is still a lot more to the story than we have shared over here. You can catch it on NumberTainment where Abdul Basit plans to upload a video of his own story on Friday.