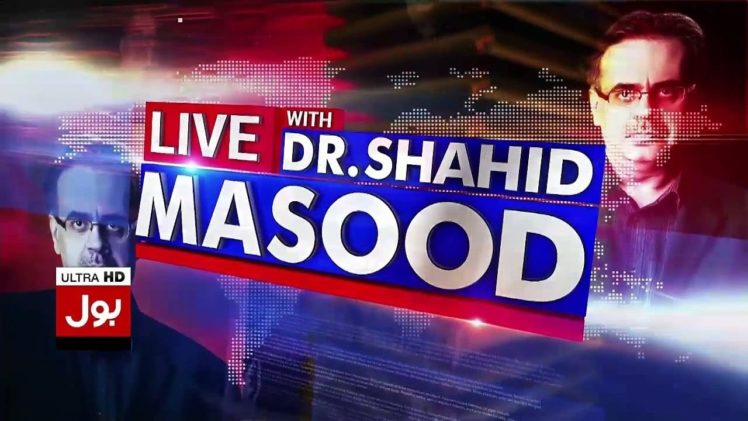 The show will remain suspended for a duration of 30 days and a Rs. 1 million fine is to be paid by Bol network. The show was suspended due to false allegations against Pakistan Army and ministers of finance and defence.

Sindh Council of Complaints made recommendations against Bol tv and Dr. Shahid Masood after the network failed to provide a valid point against a complaint issued against them.

The complaint forwarded to PEMRA by Minister of Finance Ishaq Dar states that Dr. Shahid Masood, on January 24th on the show Live with Dr. Shahid Masood made false allegations against an alleged meeting held in Rawalpindi between senior officials of the military and Ministers of Defence and Finance. According to the complaint, the allegations were made due to ulterior motives and mala fide against the Ministers.

Here’s a part of the notice issued by PEMRA to Dr. Shahid Masood and Bol Network:

As soon as I decided to restart my show on newsone,I am again banned for 30 days by#Pemra pic.twitter.com/dULH5eNx33

It was confirmed during the initial inquiry by PEMRA that Dr. Shahid had indeed mentioned this on air that Mr. Ishaq Dar and Mr. Khawaja Asif had held a meeting with senior officials of the military in Rawalpindi.

PEMRA also stated that the anchor and the management of Bol network (M/s Labbaik Private Limited) had failed to provide counter evidence or anything negating the comments they made about the meeting.

This isn’t the first news anchor/show to be banned on Bol network. Dr. Amir Liaquat’s talk show “Aisay Nahi Chalay Ga” was also banned a few weeks ago. The show and the host were banned due to preaching hate on air against notable personalities.

ISLAMABAD HIGH COURT SUSPENDS PEMRA'S DECISION OF 30 DAYS BAN. THANKS TO ALLAH AND ALL OF YOU!