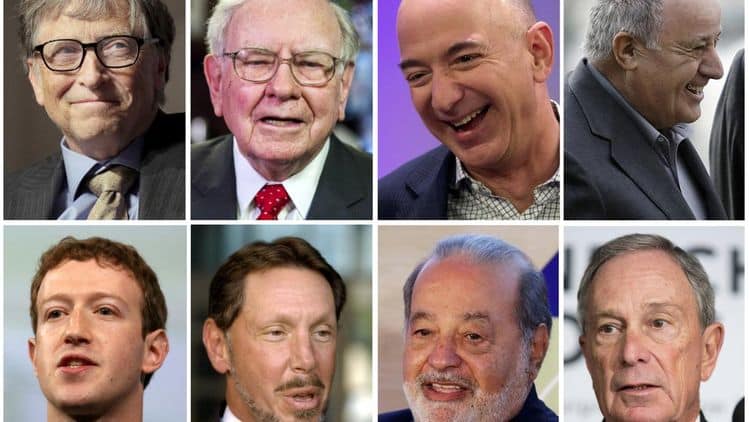 It has been a record breaking year for the richest people on earth. Billionaires have increased in number by 13% in just a single year, rising to 2,043 from 1,810. Forbes states that this is the first time that it has pinned down over 2,000 ten-figure fortune owners.

Their total net worth rose by 18% to $7.57 trillion, up from $6.48 trillion, another first in history. The change in the list of billionaires is 233 compared to 2016, the biggest one noted by Forbes in the last 31 years. People who gained fortunes trumped the losers by a ratio of three to one.

Here are the list of people who made it big this year:

The list is topped by the familiar face of Bill Gates, who continues to top the list four years in a row. He has topped the list 18 times in the past 23 years, credited to enormous growth of his company Microsoft.

Even though he has been one of the leading philanthropists for the past few years, he continues to retain his place at the top. His current fortune stands at $86 billion, up from $75 billion last year.

Joining Gates is the popular investor and philanthropist Warren Buffet. His fortunes are now worth $75.6 billion, up from $60.8 billion last year.

He has seen the second biggest gain, of over $14.8 billion, during the past year and has made the most profits ever since Donald Trump got elected in November 2016.

Third in the list is Amazon CEO, who had the best year of his life. His fortunes increased by an unbelievable $27.6 billion in just a single year. His fortunes are now worth $72.8 billion, up from $55.2 billion last year.

This is the first time that Bezos has made it to the top three richest men on the planet. He stood at number five last year.

Founder and owner of the popular clothing chain, Zara, Amancio Ortega stands fourth on the Forbes list of richest people.

Ortega is also part of the list of people who gained a lot over the past year. His fortunes increased by $4.3 billion over the past 12 months putting him at number 4 with $71.4 billion in assets. Despite seeing gains, he moved out of the top three as he couldn’t keep up with the massive profits seen by the others.

Facebook Founder and CEO continues to see growth in his fortunes as his social platforms and communication apps continue to flourish. Perhaps the release of Oculus Rift VR headset might have had a hand in that as well.

Zuckerberg now has a fortune of $56 billion, seeing a huge increase of $11.4 billion over the past 12 months.

Mexican tycoon Carlos Slim, once the richest man on the planet, now comes in at number six. This is the first time he has been forced out of the top five in a dozen years.

Others in the top ten include familiar faces like Oracle co-founder Larry Ellison with $52.2 billion in fortunes, brothers Charles and David Coch with $48.3 billion in assets each and Bloomberg owner Michael Bloomberg with fortunes of $47.5 billion.

US President, Donald Trump now stands at number 544, down by over 200 positions, with a net worth of $3.5 billion, featuring a recent drop of $1 billion during the past year. His real-estate business around the Trump Tower has been struggling in recent times.

The average net worth of the 2,043 billionaires on the list is $3.5 billion. 277 women were also on the list, up from 202 last year. These include 56 self-made female billionaires as well. There were 195 newcomers on the list, majority (76) of them were from China.

John Collison also became a part of the list, and now holds the title of being the youngest self-made billionaire in history at 26 years of age. Snapchat owner, Evan Spiegel, was 2 months older when he made the previous record. These two are amongst the only 4 self-made billionaires in their 20s.

183 of the billionaires belong to the tech industry and together, they make up for a major chunk of the global assets, exceeding the $1 trillion mark.

Most billionaires belonged to the US, 565 in total, up from 540 last year. China follows the US with 319 billionaires.

You can check out the full list of billionaires here.