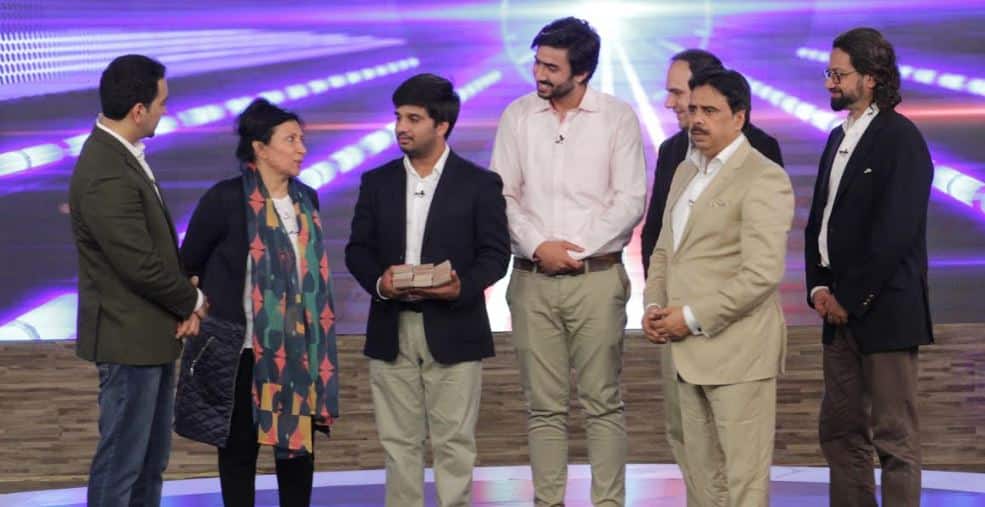 The fourth episode of Idea Croron Ka introduced us to a new investor on the show. Ms. Asha Jadeja, an angel investor from Silicon Valley. She joined Mr. Salim Ghauri, CEO at Netsol and Mr. Naeem Zamindar, CEO at Acumen Pakistan.

It was great to see women entrepreneurs taking the stage to pitch for investment. They pitched their startup Gharpar, an online platform that provides top of the class beauty services at home. The team of four (three were women) were offered investment by Naeem Zamindar and Salim Ghauri both. Naeem made the first offer of Rs. 1 crore against an equity of 10% and Salim Ghauri offered Rs. 2 crore for 20% equity. The team Gharpar brought down their ask from Rs. 5 crore against 10% equity, to Rs. 2.5 crores but the judges didn’t budge from their final offer and the deal did not materialize.

Next up, Himmat Karo Pakistan featured 17 years old Moiz Shaukat. Moiz has come a long way despite his disability. He faced his troubles head on and today is recognized as a motivational speaker, a writer, trainer and peace ambassador. He recently won an award which declared him as Pakistan’s Youngest Inspirational Personality. Dr. Umar Saif of PITB also appreciated his strength and wished him success. The segment ended with Moiz singing the song that pretty much sums up his life: ‘Hai Jazba Junoon tou himmat na haar’.

The success story segment introduced Mr. Khurram Khan, who has brought a major transformation in the restaurant industry of Pakistan in the past 10-12 years. He is the owner of most of the Subway outlets in Pakistan and Italian restaurant Tuscany Courtyard as well. He started the restaurant business at a very young age of 25. Khurram told that the moment where he felt his dream came true was the point when his restaurant Tuscany Courtyard in Islamabad got famous. He started this business 15 years ago with a small loan that his father provided him. He recalls that when he started the business, he and his brother used to deliver almost 30 Subway sandwiches each day to different offices. Today he owns multiple Subways in Pakistan and 2 branches of Tuscany Courtyard.

As the episode proceeded, a startup of young kids by the name of DIY Geeks came to raise investment for their venture. They are trying to help hobbyists, geek, nerds and makers to develop real life localized solutions and products. To achieve this goal, they have built an online circuit components shop coupled with dedicated DIY tutorials to use components that are available locally to develop products and prototypes.

They are basically aiming to run a makers movement in Pakistan, which is why they came to Idea Croron Ka, to convince investors to become anchors in this movement. Usama Abid, co-founder at DIY Geeks asked for Rs. 1.5 crores against 10-15% equity to establish a lab in Pakistan. Naeem Zamindar grilled Usama on the numbers that back his startup. Usama justified the use of the investment very well. He was very clear on his future plans.

Asha Jadeja appreciated the idea of setting up the lab. She mentioned that she was the 1st investor of Makers Movement in Africa and later she invested in India as well. Continuing the same, she announced that she’d love to take the whole round of Rs. 1.5 crore investment ask of DIY Geeks. And she did it for zero equity.

She said that she’d like to sit on the board to guide the team on how to use the profits generated by the startup.

Nabeel A. Qadeer concluded the show with appreciation for the foreign investor, Asha Jadeja, for investing in a Pakistani startup in order to initiate the makers movement. Nabeel, along with CMACED, is indeed spreading the true spirit of entrepreneurship through this show. This was the best investment deal finalized on Idea Croron Ka till now. Stay tuned for more episodes from Pakistan’s first ever investment raising reality show.