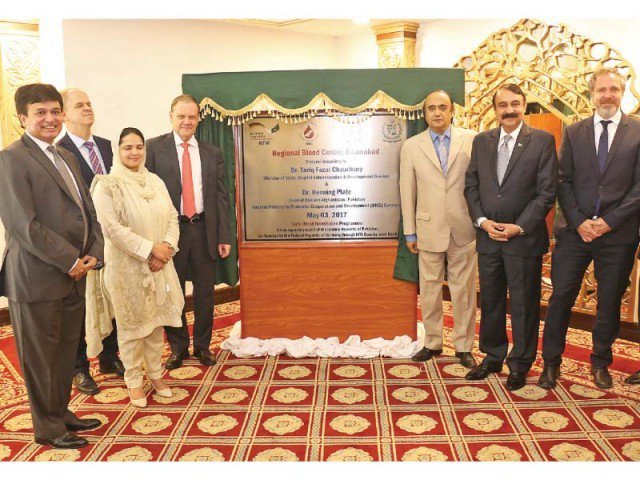 A new blood center is going to be opened up in Islamabad that will provide safe blood and other services for the city’s inhabitants. Right now the foundation for the building has been laid down but it is hoped that it will open soon.

The ground-breaking ceremony for the blood center was performed by Dr. Tariq Fazal Choudhry, Minister of State for Capital Administration and Development Division (CADD). The blood center has been named as the Islamabad Regional Blood Center.

The blood center is being built with the support of the German government and the KFW-German Development Bank. It will be situated on Park Road in Chak Shehzad with a value of about Rs.175 million (1.6 million Euros). The authorities hope to have it built and up and running within the next twelve months.

Also present at the groundbreaking ceremony was Dr. Henning Plate, Head of the Afghanistan-Pakistan Division of the German Economic Cooperation and Development Ministry. He stated that he hoped that this German-funded center would promise a new period of blood safety in the country.

Besides these two, Wolfgang Moellers, KFW Country Director, was also very happy over the start of the construction of the blood center. This is part of Phase II which has begun after other regional blood centers had been successfully opened in Gilgit-Baltistan, Khyberpakhtunkhwa, Balochistan, and Punjab. These centers were a part of Phase I.

Locals and the youth especially, were urged to regularly donate blood on a voluntary basis to support and maintain the blood center.

The Project Director of the Safe Blood Transfusion Programme, Professor Hasan Abbas Zaheer, stated that the new center should set standards for all other blood centers all over the country and would be able to fulfill all blood related needs of the city and surrounding areas.

He further stated that the facilities provided at the center in Islamabad would be used to work as a acquisition and circulation center with an entire system that would regulate all the concerned activities. Included in this is mobilization, reservation of voluntary blood donors, keeping a donor database, and also collecting blood. The center will also be able to centralize blood processing, screening, and testing, before storing all the prepared components.

The center will also be able to meet international standards and follow the international ideal in blood centers by being completely computerized.

When he was asked about the state of the already running blood banks in hospitals, Professor Zaheer stated that all of them would be systematically modernized and reconstructed while also being turned into completely storage centers to be able to give patient-oriented hospital transfusion services, test for compatibility, and haemovigilance.

The new center will also be able to provide private and other non-governmental hospitals with blood components.

He further said that as of now there are around twenty hospitals and blood banks which do not meet international standards and go against international practices when they screen and give blood directly to the patients.

The new center being built in Islamabad is one of the fifteen Regional Blood Centers (RBCs) which are a part of Phase II of the project which makes them eligible for development and upgrading. Other than this, there are about thirty other blood banks in the hospital that will be remodeled and re-equipped with the grant of Rs.1.1 billion (about 10 million Euros).