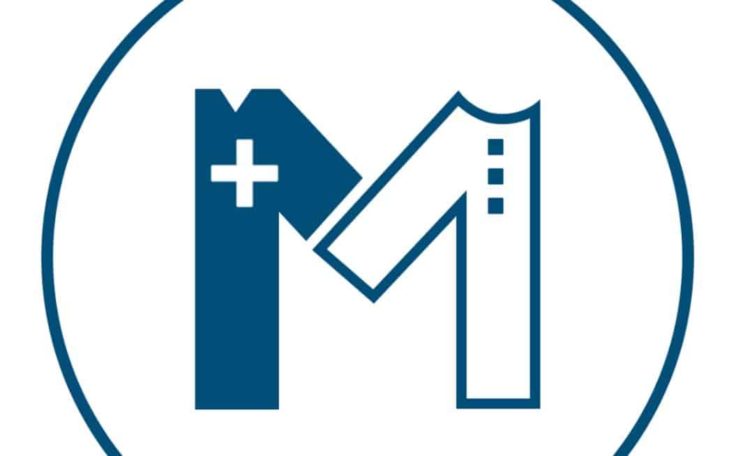 Innovation is the driving force of any knowledge-driven country. Startups depend on these ideas, which can bring a positive change in the society. Similarly, healthcare startups are playing a crucial role in improving the ecosystem of Pakistan.

Among these startups, “Marham – find a doctor” has shown promising growth, by providing a helpful platform for the people through marham.pk.

Marham has played a big role in improving the healthcare system not by only promoting medical tourism in Pakistan, but also made Pakistani doctors proud all around the world by building online presence of qualified doctors, and by establishing an online community to ask questions from qualified doctors or get second opinions.

Here’s an example of judging just how well Marham is doing.

Brig. Dr. Ajmal Rashid explained the patient was in a very serious condition of psoriasis. The patient posted his query on Marham group last month in April.

He was getting checked by a general physician in UK, but his disease was spreading on all over his body. He was unable to move properly, because every movement was painful.

Brig. Dr. Rashid further explained that patient’s condition was getting worse day by day, he had booked the appointment for a dermatologist, but it was due after 3 months.

The patient tried to consult a dermatologist urgently, but his general physician did not consider the patient’s condition an emergency. The pain was getting out of hand, and patient needed assistance.

The response on Brig. Dr. Ajmal Rashid’s post was phenomenal. The patient was flown in, got checked on the same day, and was diagnosed with a serious life-threatening condition called Psoriatic Erythroderma.

The physical condition of the patient was critical, his entire body was covered with a rash and his skin was peeling off. The sight itself was so painful that it was unfathomable to experience what the patient was going through. The patient was unable to perform even a simple task and was sensitive to touch.

The patient’s aggravated medical condition was due to the ineffective treatment of the doctors. The treatment was started right away without any delay, and it showed effective results. In 2 week, the patient showed visible improvements. His skin started to clear, he was able to do simple tasks, the pain started to wear off, and he was out of the life-threatening condition.

These images perfectly represent the calamity of the situation. Any person would consider it an alarming situation, even without a medical degree.

Anyone can get an idea of the seriousness of the disease and the pain the patient must be experiencing by just looking at these images. The third image shows the gradual improvement, which was after the treatment.

Building doctors’ online presence and a community of help and medical knowledge were not a piece of cake. It took all of our energies to educating people about how this is a beneficial idea. Initially, no one believed this could work or can save someone’s life. But, when things started rolling, everyone was surprised how helpful and complete this new health ecosystem is. – Asma Salman – Co-Founder Marham

The post by Brig. Dr. Ajmal Rashid got a lot of traction. People from Pakistan and all around the world responded to the story. Following are some highlighted comments of these people; 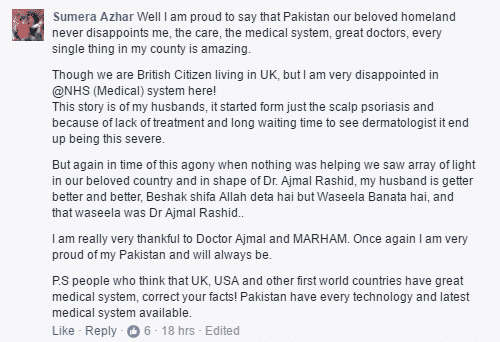 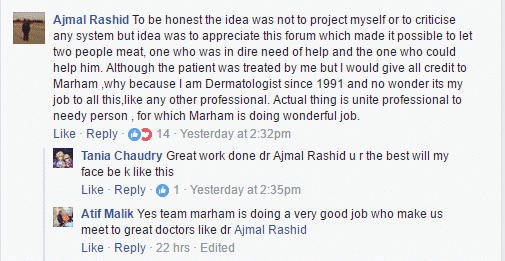 People from outside of Pakistan wholeheartedly participated in the conversation, and praised the competence and the credibility of the doctors of our country. It is a proud moment for Marham and will inspire them to keep helping everyone, and provide a global platform to help patients all around the world.

Here is the journey of Team Marham: