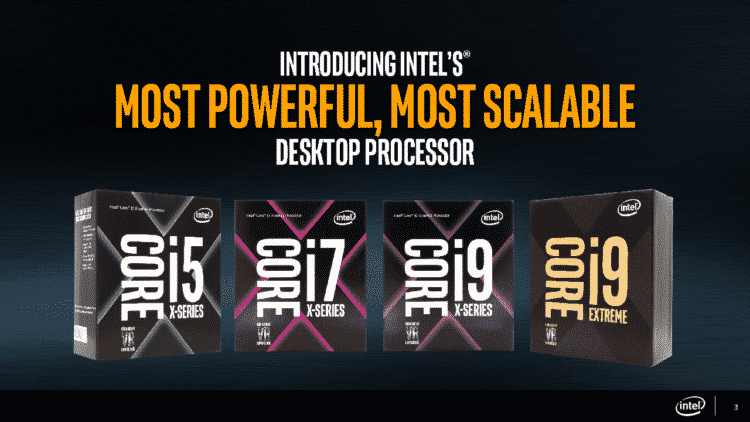 A few weeks ago, AMD revealed an ace up its sleeve – the 16 core, 32 thread ThreadRipper. Aimed at the high-end desktop (HEDT) market, the processor was meant only for the PC enthusiasts, software developers or CAD designers.

At Computex, Intel revealed its own HEDT platform, stepping it up a notch. The new platform uses the X299 chipset with X-series of processors. The biggest and baddest of them all, Intel Core i9-7980XE will come with a whopping 18 cores and 36 threads.

Unlike the consumer friendly version, the HEDT platform are more of a “prestige part” thing. Regular Joes won’t be able to make full use of the processors threads and cores but software developers or video streamers can. Intel is aiming for them with the X-series.

Starting at the bottom, we have the Intel Core i5-7640X and i7-7740X. These two fall under the Kaby Lake-X sub category. These two are very similar to the regular Kaby Lake counterparts with four cores and four threads (or eight threads with the i7), two memory channels and 16 PCIe 3.

Moving up you get the 6, 8 and 10 core processors. They’re called the Skylake-X processors and feature double the memory channels compared the Kaby Lake-X counterparts as well as a higher power draw of 140W.

All of these processors use the same LGA 2066 socket which can give you a strong upgrade path if you start with the lower end processors. All of the processors will be have unlocked multipliers, which makes them easier to overclock. Additionally the chips will Intel Optane Memory, up to three PCIe/NVMe SSDs, 8 SATA ports, and 10 USB 3.1 generation 1 ports.

No Intention of Backing Down

The new series shows that Intel isn’t changing its strategy because of AMD. The 8 core i7-7820-X costs $599 which is a $100 higher than AMD’s corresponding processor. The price premium is still there.

One area where Intel has the advantage is the single threaded performance where AMD lags behind. The Intel X299 motherboards and chips will be available in coming weeks.