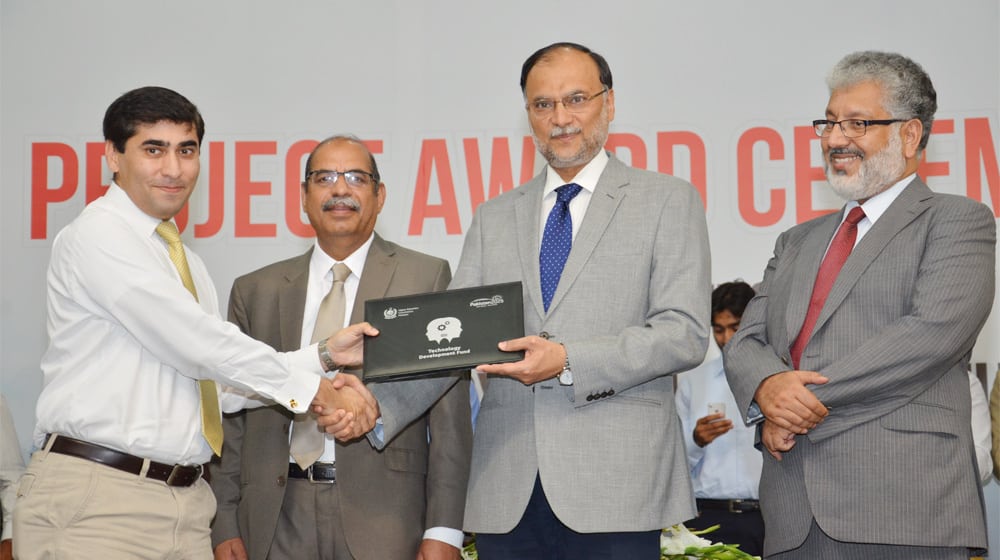 The Higher Education Commission (HEC), Pakistan has awarded 31 projects under Technology Development Fund to PhD scholars who have returned from abroad after completion of their PhD, in order to develop new technologies relevant to country’s socio-economic needs. In this connection, HEC organised the first project award ceremony at its Secretariat here on Wednesday.

Speaking on the occasion, Ahsan Iqbal, Federal Minister for Planning, Development and Reforms congratulated the scholars and researchers on winning the projects. He said technologies are redefining the production means, adding that Pakistan has to adopt technologies as their beneficiaries so as to realise its dream of joining 25 leading economies of the world by 2025. He said that TDF has been launched to build strong linkages between knowledge and production platforms. “Our universities need to turn into centres of innovation,” he underlined.

The Minister stated that economic prosperity is linked to political stability. “We have to be mature as a nation and ensure internal harmony and positive synergy,” he stressed adding that the Government is committed to bringing transformational reforms by making universities engines of innovation.

Mr. Ahsan stressed that the revolutionary and swift changes in information technology have to be adopted in a competitive manner. He said that new technologies of robotics, artificial intelligence, cloud computing, data science are fast changing the way developed world is progressing and we have to adopt these technologies on a faster pace. He appreciated HEC for focusing on faculty development adding that these areas have to be given special attention.

In his welcome address, Dr. Mukhtar Ahmed informed that as many as 116 scholars submitted their proposals under TDF. He said 31 projects have been selected for funding after thorough evaluation by HEC’s expert committee.

Dr. Mukhtar Ahmed said each approved project will receive a grant of 14 million rupees. “The projects approved in specified areas are expected to develop products or services which would positively impact the economy, resolve a current problem, meet a market need, utilise local raw material, and create large scale employment,” he said.

Sharing initiatives of HEC for promotion of higher education in the country since its inception in 2002, the Chairman said HEC’s achievements are being recognised at international level.

TDF has been established by HEC with an aim to support researchers to materialise their ideas and research into products and services and help realise country’s dream of becoming a knowledge economy.

It aims to support innovative ideas of researchers for prototype development, initial product development, patent filing, and marketing and licensing of new products so as to impact the country’s economy through new and emerging technologies.