Exports from Pakistan to all other regions of the world have plummeted except for Europe, Australia and New Zealand during the last financial year.

The State Bank of Pakistan released export destination-wise receipts for the last fiscal year which depict how poorly the country has performed in the last financial year 2016-17. Except for Europe where Pakistan has duty free access to the markets, exports to all other regions have dipped.

The drop in exports is disconcerting and needs attention from the government. The government for its part needs to review its economic policies and find the gap between an ever-increasing exports and imports resulting in alarming high trade deficit.

Even with the duty free status in Europe, Pakistan’s exports only grew to $7.28 billion last year with merely 3.1% higher exports than the previous fiscal year.

The government believes that this drop in the exports has resulted due to the drop of the British Pound as compared to other currencies. Therefore, exports to UK have become expensive. It should be mentioned that exports to UK are only 8% of the total exports of Pakistan.

As for Australia and New Zealand, the exports amounted to $42 million or 16.3% higher than the previous fiscal year. Exports to Southeast Asian region also slightly picked but remained at only $1.1 billion. 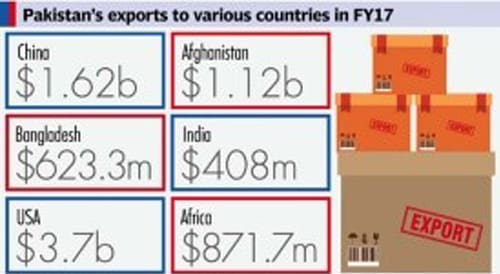 During the time the current administration is in power, the government has taken more than Rs 1.3 trillion in additional taxes. This is also one of the causes behind making industries uncompetitive.

The exports to China plummeted by over 14% to a meagre $1.62 billion last year even with Pakistan having four trade missions located in Beijing, Chengdu, Hong Kong and Shanghai.

As for the exports to Afghanistan, it sunk by 9% to $1.12 billion, with exports to Bangladesh just staying at $623.3 million.

India was the single exclusion where exports amplified by 2% to $408 million.