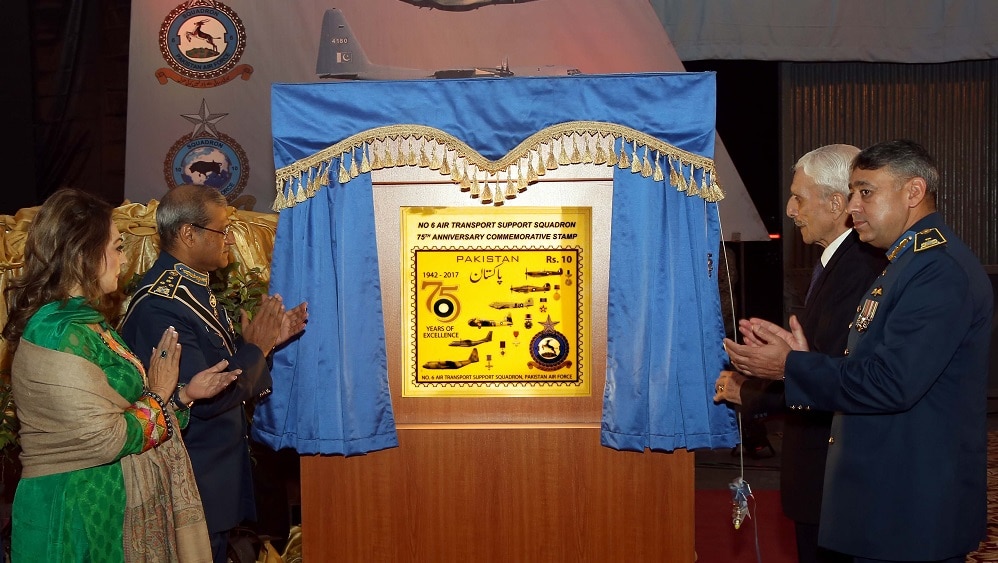 Squadron No 6, the oldest squadron of Pakistan Air Force, celebrated its 75th anniversary in a grand ceremony at PAF Base, Nur Khan.

A well crafted documentary, encompassing the glorious history of this magnificent squadron was also shown in the ceremony. The Air Chief also unveiled a commemorative postage stamp which has been issued by Pakistan Post to pay tribute to the services rendered by Squadron No 6 during the past 75 years.

Addressing the audience at the occasion, the Air Chief said,

PAF has remained at the forefront in War on Terror and has gained invaluable lessons in our decade and a half engagement in this war. In this context, the Squadron  has played a decisive role in Operation Zarb-e-Azb. Combat crew of No.6 Squadron operated with professional excellence in the heart of the areas where miscreants were hiding and provided the assistance to frontline Fighter aircraft. This has enabled the PAF to achieve landmark  success against terrorists without any collateral damage.

No 6 ATS Squadron being the oldest squadron of Pakistan Air Force, was established in 1942 at Trinchnopoloy, as a Tactical Reconnaissance Squadron on Hawker Hurricane MK-II aircraft. The Squadron used Spitfire aircraft, Dakota aircraft, Bristol Freighter aircraft. Nowadays, this squadron is using Hercules C-130 and Casa, CN-235. No 6 squadron also has the unique honour of participating in World War II.

This squadron always came up to the nation’s expectations in the hour of need by extending all out support and provided relentless assistance to the victims of floods and earthquakes.

During the 1965 war, this squadron was modified as bomber squadron and then CAS, Air Marshal Nur Khan himself led the mission to drop bombs in enemy territories.