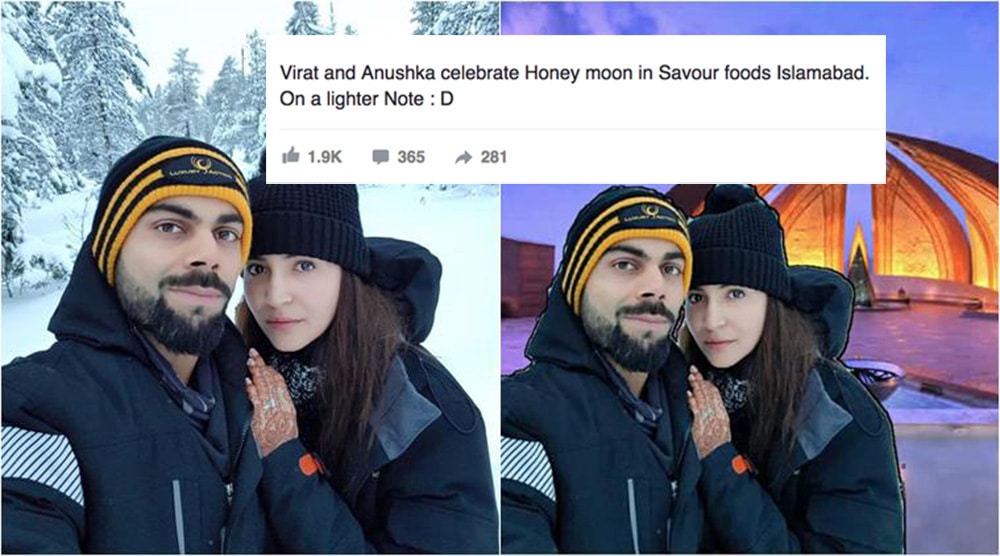 The fans of the star couple were ecstatic to say the least. When Anushka Sharma publicly shared a picture of the couple in Finland where they are on their honeymoon, an epic Photoshop battle ensued.

Here’s the original picture that was shared by Anushka Sharma on her Instagram:

While Indian fans absolutely loved the pic, the picture has become a new meme sensation in Pakistan. The memes of the two are making the internet crazy right now and the two have occupied the social media space; be it on Twitter, Facebook, or Instagram.

Let’s look at some of the hilarious memes about them. No harm in laughing for a while, right?

The couple can be seen in front of the famous Savour Foods in Islamabad. Famous for its  Rs. 170 Pulao, someone decided that it could also be appropriate for their honeymoon cravings.

Some say the couple even visited Lahore School.

Virat and Anushka visited the Lahore School and took a memorable selfie after getting their fee installments done. 😂 Meanwhile Happy Holidays*Orignal Credits Where due*

Virat Kohli and Anushka Sharma spotted at Fatima Jinnah Medical University, Lahore. They went there on the invitation of…

Well Pakistan certainly has more than its share of political controversies. So why not have the couple be seen loitering around at the outskirts of the Islamabad High Court?

Then of course, what’s a trip to Pakistan without going for a sight-seeing tour of Minar-e-Pakistan. Someone clearly had the right idea here:

Of course there’s going to be a majestic landmark in here somewhere:

Who doesn’t like Gol Gappay? One photoshopper decided to do just that:

Well if we talk about cold climes, then there really has to be a perfect place in Pakistan that seems like a perfect fit for the Anushka-Kohli honeymoon selfie. This bridge could probably be it:

These are but just a few locations where meme makers and avid Pakistani Photoshoppers had some fun with the star couple’s selfie. Where did you locate the couple in Pakistan? Let us know in the comments section below.