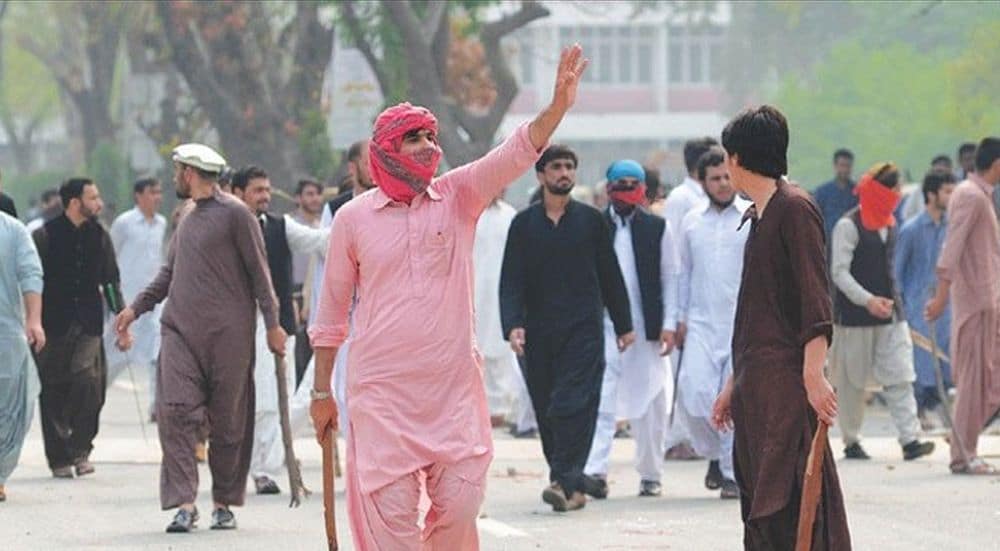 The protest grew violent as the PBSU members sabotaged IJT’s festival as reported by a local newspaper. The members of IJT later held a sit-in outside Vice-Chancellor Dr Zakaria Zakar’s office, however, it didn’t end well as the students from Jamiat burned a classroom and the Electrical Engineering Department. Not just this, the infuriated students also vandalized vehicles near the affected department.

The Twitterati have sprung into action, debating over the role of two groups, PU administration and Punjab Police who have a large number of men posted on the campus following the clashes.

The situation is pretty bad in PU.

Who is at fault here?

Before and after attack of Baloch students on Punjab University Pioneer Festival #PUPeaceUnderThreat pic.twitter.com/wmezlX46dP

Let’s hope the situation clears out soon without any bloodshed.

Just left Punjab university. Seems like another showdown today between Punjab University admin and Jamiat. Saw some boys with weapons under their shawls. Don’t be surprised if you see some blood later today. Pakistan’s biggest university still suffering. Shameful pic.twitter.com/fMlO26n3GD

If you compare the two provinces apparently people often assume Peshawar University might be having powerful Jamiat wing but that is not the case so why Punjab University witnesses their control every now and then? Something is basically wrong with Punjab govt's policies.

Racial prejudices need to be stopped if this is how it happened.

Again Baloch Students are attacked in Punjab University Lahore along with Pushtoon Students. Baloch Students Action Committee stands with Baloch and Pushtoon students.
More than 100 student are injured. The doors of education are being closed for Baloch students everywhere. pic.twitter.com/S6esK031HW

This may well be a valid reason.

@srqazi @liaqatbalochji It is high time that JI disown IJT of Punjab University. Goons like them are the reason why nobody is interested in giving your party any vote. They are exactly what APMSO was in Karachi University. Thanks.

How can educated students beat fellow students like animals?

Strongly condemn the militancy of #IJT at #Punjab University have serious concern over incompetence of @GovtOfPunjab upon their negligence.

Such organizations need to be banned, once and for all.

It is high time to get rid of them.

When will Punjab University get rid of these so called educated goons. Shameful.#PunjabUniversity