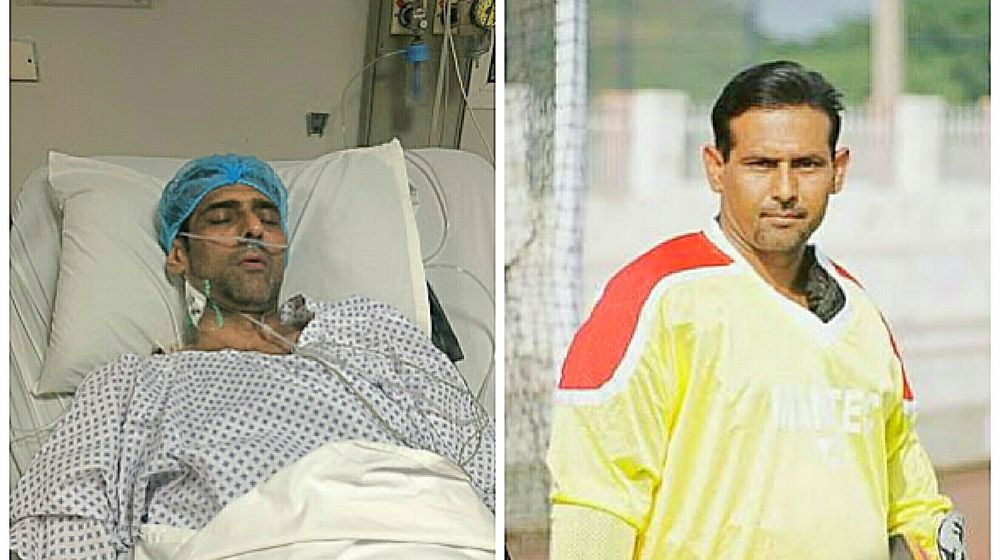 The legendary Olympian and former goalkeeper of Pakistan Hockey team is awaiting help in a local hospital in Karachi.

Another world-class athlete is looking for government’s help to recover from poor health condition. If there is one thing that we do time after time, that’s to show ungratefulness towards the legends of the past era.

Apart from cricket, world-renowned players from every sport have seen worst days of their life after hanging up their boots. Cricket is a self-sustained game otherwise the story there would be similar if it were dependent on government’s help.

The latest story involves the Olympian and 1994 hockey World Cup winning goalkeeper Mansoor Ahmed. Mansoor was part of the squad that made the nation proud in the 94′ Hockey World Cup. After his retirement, his days of downfall started.

Now, any decent country in any part of the world would recognize the efforts of its legends and help them after their retirement. However, unsurprisingly there is no such precedence in Pakistan. Both the government and the Pakistan Hockey Foundation are oblivious to this.

The retired goalie is fighting for his life at a local hospital in Karachi. Mansoor’s family is unable to meet the expenses of the treatment required for his recovery. Apparently, the whole nation is unable to pay for the treatment of the player who gave the good part of his life to this country. Mansoor is in ICU and requires treatment for his heart condition.

The initial estimate for his complete treatment was Rs. 0.5 million, however, the expenses have gone way above that. Pakistan Hockey Federation requested Sindh Secretary for Sports and Youth Affairs to grant Rs 1 million for Mansoor’s treatment. However, not a single penny has yet reached Mansoor or his family from the government or PHF.

A TV anchor has reported that Shahid Afridi has announced to sponsor the treatment of the Olympian. Here is her tweet;

Shahid Afridi steps up to save life of Pakistan’s former hockey captain Mansoor Ahmed. “SAF will bear all the expenses of Mansoor’s treatment and won’t let him suffer like this” Shahid Afridi. pic.twitter.com/C3CXlN9FPF

This is certainly good news and a lesson to authorities as well. If a sportsman can help out another sportsman then the country’s government surely can as well. The athletes require extra support after their retirement because of the lack of other technical skills. Call it a dilemma or whatever, but, it has become a fact that if you are to pursue a career in sports then you can’t continue your education in our system. This is also why many passionate athletes sacrifice their education and drop out of schools to pursue their sports careers.

Government and sports boards are to blame here too because of the lack of any organized sports at the school level.

Mansoor’s resume is loaded with medals and all titles that a player can only dream of. In any country, he would be living the ideal life that the legends of the game deserve but not here.

The goalkeeper represented Pakistan in three Olympics tournaments and won bronze in the 1992 Summer Olympics Barcelona. Regarded as the best goalkeeper ever to play for Pakistan, Mansoor then went on to win a total of 12 gold medals, 12 silver medals and 8 bronze medals in 338 international matches that he played for Pakistan.

Even after his retirement, Mansoor remained committed to serving the country he played for. He became coach of Pakistan’s junior hockey team in the same year that he retired. He served as the ambassador for government’s No Smoking Campaign as well.

Mansoor Ahmed served the country in the best way he could, now it is our turn to give him back what he deserves before we, as a nation, fail another hero.

The story of negligence isn’t confined to Mansoor only. Recently, an Olympian cyclist, who represented Pakistan two times in Olympics passed away after living a miserable life. Muhammad Ashiq had to drive a rickshaw to make ends meet. Despite being once known as a national hero, Aashiq died a death that no hero deserves.