As you might have heard, Pakistan Telecommunication Authority has launched DIRBS — Device Identification, Registration and Blocking System — that will block all smuggled and unregistered smartphones as well as feature phones in the country.

Before we help you understand how DIRBS works, and how can you register your phone to avoid any blocking, here are a few terms that you need to know well.

IMEI, or International Mobile Equipment Identity, is a unique number issued to every mobile phone in use today. It is also important to note that phones with dual SIM will have two IMEI.

This unique number (or numbers in case of dual SIM phones) is set at the time of its manufacturing. And because of its uniqueness, no two phones in the world can have similar IMEIs.

Now that you know what an IMEI is, it is time to dig in deeper and understand how DIRBS will make use of IMEI numbers to block unregistered and smuggled phones.

There will be basically three types of IMEI in DIRBS:

As mentioned above, two phones can never have similar IMEIs. The list of IMEIs that a manufacturer can use in their phones is issued by GSMA, a global authority that represents mobile operators from around the world.

In short, any phone in the world can be identified if it has valid IMEI or not by simply checking its IMEI number against GSMA’s list of approved IMEIs.

For your information, some small, home-based Chinese manufacturers use dummy numbers as their phone IMEIs. At times they use all zeros as the IMEI or even alpha numeric numbers for their phones’ IMEIs. All of these numbers are considered as invalid IMEI. And the reason why some Chinese phone makers do this is because they want to avoid a nominal fee that’s charged by GSMA for issuance of IMEI list.

All phones that are imported through legal channels in Pakistan will have PTA approved IMEI numbers. For example, suppose Samsung is importing 10,000 phones into Pakistan per month, they will need to share the list of IMEI numbers of all the phones with PTA first.

Alternatively, any IMEI number that is Valid and PTA approved is considered as Compliant IMEI. This term is used for DIRBS as well.

Third type of IMEI will be Valid; not compliant. Its those phones that come with GSMA approved IMEIs but are not registered with PTA, such as a phone that your cousin brought from Dubai may have valid IMEI but not compliant IMEI.

How to Check IMEI number of a Phone?

Now for the main thing. Checking your phone’s IMEI number is very simple. To do this: 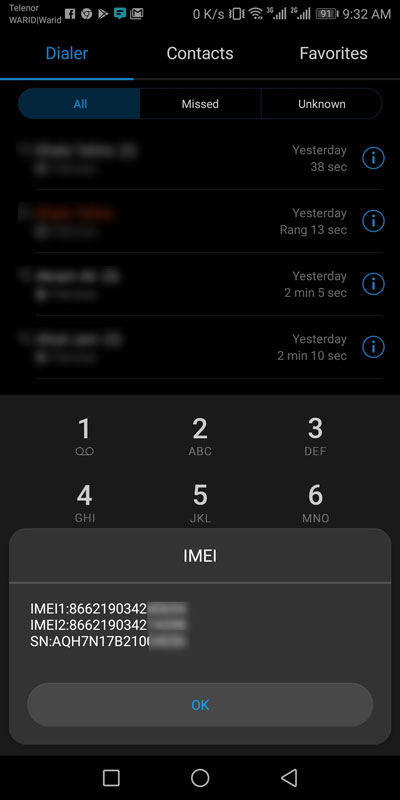 How to Check if an IMEI is Valid, Invalid, Compliant or Not?

You may have bought your phone from OLX, or an online store. Or maybe your cousin brought it for you from Dubai. In any case, there are a couple of reasons why you may need to check whether your phone’s IMEI(s) is Valid, PTA Approved or not.

While checking the IMEI number of your phone through the above three methods, there could be three possible outcomes for your phone:

Who Needs to Register their IMEI Number to Avoid Blocking

Now that we have an idea about IMEI numbers and how to check if its valid or not, or compliant or not, you need to proceed to the next step.

Depending on your scenario, here’s what you need to do to register your smartphone so that it doesn’t get blocked from normal use later on.

Below are the possible scenarios if your IMEI number is Invalid:

Those with Invalid IMEI numbers, will get an SMS from the DIRBS system directing them to pair their smartphone with SIMs that they want to use on this phone. After a certain deadline (that will be mentioned in SMS from DIRBS), this phone won’t accept any new SIM.

So for example if your smartphone has an Invalid IMEI number, you must use all the SIMs that you want to use with this smartphone till the end of deadline. After the deadline, you won’t be able to use a non-paired SIM on this phone.

Using a SIM means, making at least one revenue generating activity, i.e. make a call, send an SMS or use mobile internet.

Once paired with a SIM, phones with Invalid IMEI numbers can be used with only these SIMs till the end of life of the phone.

And if you haven’t paired the phone (with Invalid IMEI) before the deadline, you won’t be able to use this phone ever again in life in Pakistan.

Valid IMEI (but Not Compliant)

There are some phones which could have a Valid IMEI but not Compliant IMEI numbers. This usually happens if:

Phones with Valid IMEIs but not Compliant IMEIs must use the phone at once — with any SIM — before the deadline (that will be communicated to you in the SMS sent by DIRBS/PTA).

If you use this phone before the deadline, then you will never be asked to register the phone. In fact, you can use other SIMs on these phones without the need to pair them.

If these phones are used before deadline, you will be allowed to use them as normal for the remainder of their life, just like you do it now.

If a phone (with valid but not complaint IMEI) was never used even once after the deadline then you will be given around 20 days to register the IMEI numbers with PTA, i.e. by going to PTA’s website and getting an NOC from there.

This is the same NOC that is currently required if you order a phone from Ali Express or from anywhere else.

Not to mention, after the deadline, a custom fee might be required in order to get an NOC from PTA to register the IMEI number.

Also remember that all those phones with Valid (but not compliant) IMEI numbers will not be allowed to register with Pakistani mobile networks if deadline expires and if NOC is not obtained.

Those phones with compliant IMEI — that is with Valid and PTA approved IMEIs — need to do nothing. They can continue using their smartphones as they were using before and there is not going to be any restriction on them whatsoever.

Never Forget to Check IMEI When Buying a Phone

With DIRBS in place, as you may have imagined, any phones with invalid IMEIs or non PTA approved IMEIs are going to be in trouble.

You should always make it a point to check the IMEI number of the phones while making new purchases. Whether you’re getting it from a friend or from an online store or even when you buy a phone from a shop, don’t forget to check its IMEI number.

You can check IMEI number of a phone through http://dirbs.pta.gov.pk/

You must be wondering that this new system brings a lot of hassles and limitations to owning a mobile phone in Pakistan. However, if implemented correctly, DIRBS brings a host of benefits for every mobile user in Pakistan. Here are some of them: