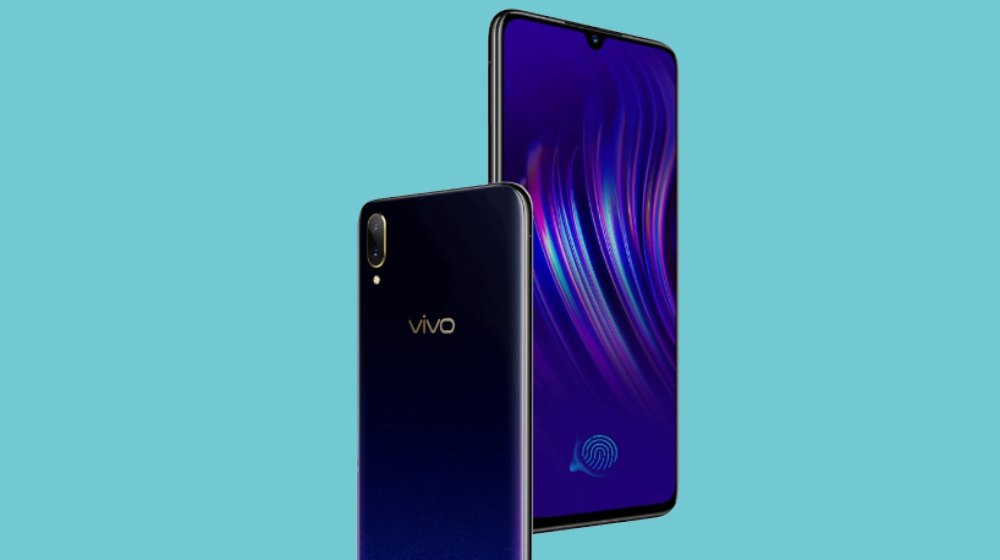 5 months ago, Vivo V9 was launched and we got our hands on the phone for a review. It was an excellent phone that provided good value for the money.

Just last week, Vivo announced the new Vivo V11 series that follows up on the V9. One is the regular V11 while the other is a V11 Pro. Both have mostly similar specifications apart from the RAM and price, but there’s more than what meets the eye.

For the design and build quality of the V11 Pro, we have the same type of plastic build that we saw on the V9. However, this time the back isn’t too reflective, instead it has a nice, glossy, dual color tone finish. Our review unit, in particular, is the Starry Night color and is black from the top (on the back) but when you start moving downwards, there’s a shift to a blue gradient.

Even though it has a plastic build, the quality is still unlike any other plastic phone you may have used. Picking up the phone for the first time, without knowing that the phone is plastic, you probably won’t be able to tell it immediately either. It’s pretty well built and feels sturdy in the hand.

Given the short time in between the release of the V9 and V11 Pro, not much has changed in terms of design. The back still has the dual rear-facing cameras arranged vertically on the top left. There’s some gold accented Vivo branding and “Design by Vivo” on the back.

The bottom houses the microUSB port (no USB type-C sadly), a 3.5mm headphone jack and a loudspeaker while on the right side you will find the power button and the volume rocker, both of which provide ample tactile feedback.

Moving on to the front you have a large 6.41-inch Super AMOLED display with Full HD+ resolution (1080×2340 pixels) and a waterdrop styled notch which houses the front-facing camera. The rest of the sensors are hidden on the top bezel to the right of the camera. including the earpiece.

Vivo calls this the “Halo FullView Display” and it really is a treat to look at it. The bezels are kept at a minimum, there are no accidental touches when using the phone without a case, and the display is bright enough to be used in outdoor conditions. Colors and vibrancy are also great, as is expected from an AMOLED panel. It also comes with an always-on display mode.

Registering a fingerprint is actually a slow process, where you have to continuously move your finger or thumb to make sure the fingerprint is registered. Using the fingerprint scanner was a bit slow as well, sometimes it completely failed to register and you had to use either the PIN or the face unlock.

As far as the performance is concerned, let’s get the specifications out of the way first. The V11 Pro uses a Qualcomm Snapdragon 660 chipset along with 6 GB RAM. 128GB of storage is also available on board which can be further expanded by using a microSD card.

As is the case with most mid-rangers nowadays, day to day performance was smooth on the V11 Pro. There was no lag or stutters when moving through the UI or during the animations. The loading time of applications was decent as well and their overall performance was satisfactory.

The gaming performance on the V11 Pro also did not disappoint. Heavy and demanding titles like Asphalt 9, PUBG also ran great and the FPS were stable and high as well.

The 6 GB RAM on board also made sure that multitasking was a breeze. You can open up multiple applications in the background and you’ll still be able to switch between them without them shutting down or reloading from the start.

I’ve always complained about how manufacturers like Vivo focused mainly on the front facing camera and don’t do much with the primary camera, making the rear camera less capable than the one on the front.

However, this time around, Vivo has improved both the front and rear-facing cameras on the V11 Pro. The back this time has a 12MP+5MP combo whereas the front has a single 25MP shooter. Both also have AI capabilities meaning the primary camera is able to recognize different scenes whereas the front camera has some sort of AI beautification modes.

The HDR mode in the V11 Pro was the main highlight for me as it worked flawlessly. HDR didn’t oversaturate or mess up the highlights in any of the images and everything was kept balanced, encouraging the user to use HDR more. And the capture times were great as well, meaning no lag in between pressing the shutter button and actually taking a picture.

The front facing camera is great as always, selfies are detailed and bright and what’s great is that the front-facing camera also has support for HDR.

My day starts at 6 AM and ends around 7 PM and during this time, the V11 Pro didn’t once shut down on me and almost always had about 20% battery remaining. That’s not saying much since most smartphones manage that quite easily.

4G was on for around 98% of the time and I also had to turn on the Wi-Fi Hotspot too, a couple of times. During all this, the camera was also used, so were a couple of social media apps such as Facebook, Snapchat etc. I also ran some benchmarks and played a few games too. With around 20% available when I get back home, I can easily make the battery last till 11pm/12am on Wi-Fi.

Given my heavy usage of the device, it lasted well enough. A light user will obviously be able to get better battery timings out of the V9, so expect around a full day on light usage.

Moreover, if the battery percentage does fall below a certain level that you are not comfortable with, the V11 Pro comes with dual engine fast charging, juicing up the battery by up to 30% within a few minutes, giving you just that extra bit of juice you need to make it through the day.

There are also some downsides to it such as the missing USB Type-C port and the mid-range processor which could have been better, maybe a Qualcomm Snapdragon 710 on the V11 Pro variant. It’s hard to justify a Snapdragon 660 SoC on an Rs. 50,000 phone.

But, apart from the two problems, there’s nothing wrong with the device that is actually a deal breaker. Even with a price tag of Rs. 50,000, I think it is a great buy and provides good value. Here is the link to the latest and updated Vivo Mobiles Price in Pakistan and their Specs in case you want some more info on Vivo Smartphones.