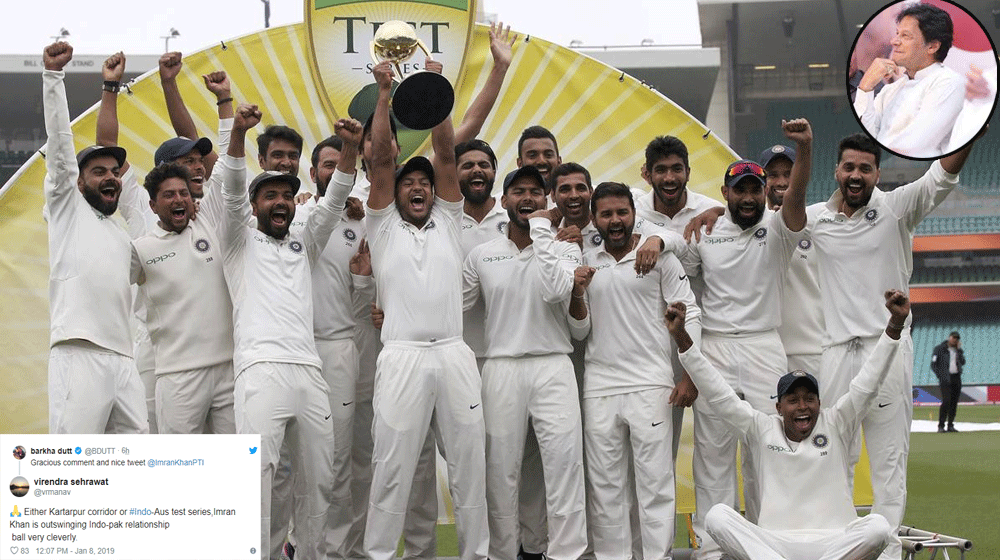 Prime Minister Imran Khan has a unique way of introducing himself to the world. Every time he faces any hurdle, he elegantly maneuvers his way out of it.

India mishandled his call for peace in the victory speech back in August 2018. He bounced Modi out with ‘Chota Admi’ comment.

Khan then bowled another out-swinging delivery by opening Kartarpur Border and now uprooted his Indian counterpart’s off stump with a quick in-swinging Yorker! That’s Imran Khan for you!

On Monday, Indian cricket team, under the leadership of Virat Kohli, made history in Australian soil. By thumping Kangaroos 2-1 in their own backyard, India became the first ever Asian team to register a Test series win in Australia.

Khan didn’t sit back like a ‘chota admi’ but showed a classical gesture by congratulating team India and its captain on such a huge achievement.

His tweet was received with both hands by Indian cricket fans and earned a lot of respect. Some people even called it a ‘brilliant diplomatic move.’

Here’s what Indian Twitterati is saying about Khan’s tweet:

@ImranKhanPTI has what no other leader in the subcontinent has today: Class.

Imran Khan as a cricketer is always highly respected in India. He is a champion sportsman and his tweet congratulating Indian team be looked as that. Nothing to be read from Indo-Pak relations point of view.

Yes, I am a big fan of Imran Khan, the cricketer.@iamHnrao @KiranKS

Indeed a nice gesture by Mr Imran Khan lauding the efforts of an Indian Cricket team.

Wonderful, Prime Minister Imran Khan! This's your sportsmanship that you've congratulated our Indian cricket team and captain Virat Kohli for India's historic win down under! Yes of course, Brilliant captain can recognise worth of another brilliant captain! Mubarak! https://t.co/sxXWE2dJnT

Thank you khan sahab. We might have political differences but when it comes to cricket, you are one of the all time best cricketing brains, your opinion and your wishes matters a lot. Thanks again.

Thank you Sir, for your kind gesture. I wish you all the luck in putting your country to the path of glory.. regards

A graceful gesture to say the least, may we witness something new and peaceful in the Subcontinent