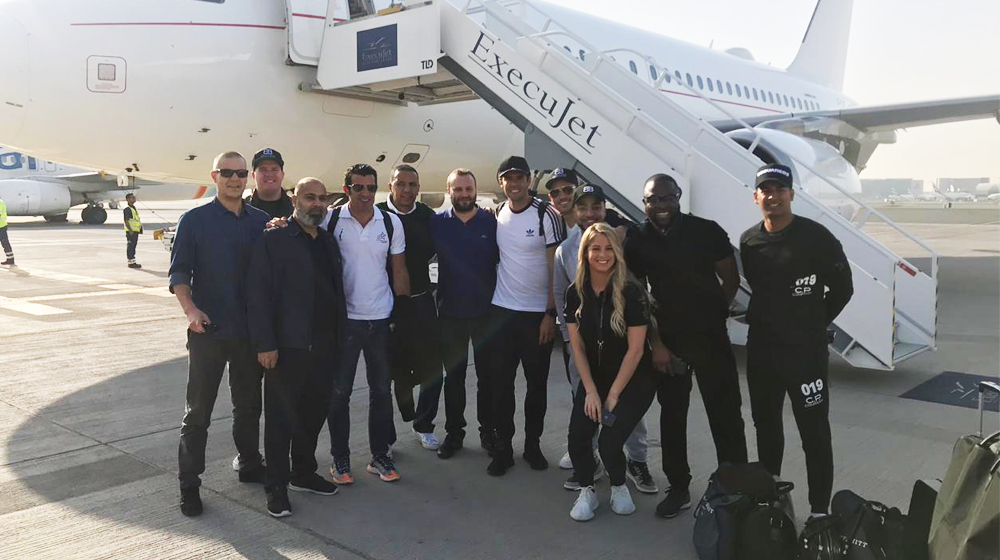 The duo is expected to make a special appearance at Karachi’s Pearl Continental. Following that, the stars will travel to Lahore for a press conference.

Both stars, hailing from Brazil and Portugal respectively, reached Pakistan earlier today via a special flight from Dubai and were greeted at Karachi’s Jinnah International Airport with traditional Sindhi Ajrak and Topi.

The aim of the tour to Pakistan is to promote the World Soccer Stars, as Pakistan has been recognized as an untapped country which has the potential to produce world-class football talent.

The World Soccer Stars has ensured a football spectacle, which is to commence from 26th April and will last till 29th of the same month. The two matches are to be held in Karachi and Lahore.

Both stars expressed their delight in visiting Pakistan over Twitter:

Hello Pakistan! I’m on my way. Looking forward to spend a few days with you guys.

Luis Figo showed the same level of enthusiasm and wrote: “It is exciting to see another emerging country in Asia embrace football. I’m certain in a population of 220 million there must be huge potential waiting to emerge into the international scene.”

Naya Saal Mubarak to all my fans in #Pakistan. Let’s make it the most memorable year ever @kaka @wssofficial2019 @touchskygroup #UnitedForFootball #Karachi #Lahore pic.twitter.com/20Z5tD3WKv

This momentous event is being organized by TouchSky Group, which expects that by inviting the legendary duo, they can help improve Pakistan’s image at the international stage.