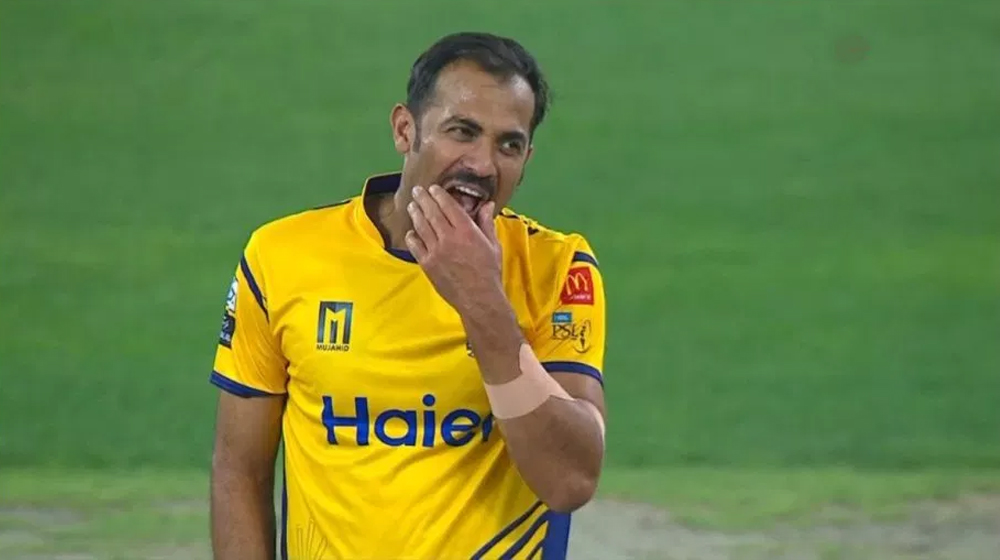 Wahab Riaz’s trademark wicket-taking celebrations might be a thing of the past as he has been asked to tone things down by his coach, Mohammad Akram.

The all-time leading wicket-taker in Pakistan Super League (PSL) kicked off the fancy celebration trend in the first edition of the competition where he revealed the ‘mustache swirling’. His latest celebration ‘sword slashing’, however, has pushed his coach over the edge.

Speaking to a media outlet in Karachi, Wahad Riaz, said:

My coach has told me to lay off this celebration style and, in fact, all the bowlers have been told to avoid excessive celebrations after taking a wicket.

I am back to a clean shave and avoiding taking a wicket with my slitting the throat celebration as I also realized it could lead to criticism and unnecessary controversies. The celebration also didn’t look good on me.

The veteran pacer has played a vital role for Peshawar Zalmi throughout the PSL this edition, picking up 15 wickets and counting. His ferocity and venom are two key elements which Zalmi rely upon, which was evident in his display against Quetta Gladiators where his team suffered a narrow 10-run loss.

Despite his impressive form, the left-arm pacer has not earned a recall for the national side. Mohammad Hasnain, the 18-year old fast bowling prodigy has instead been called up to the squad for the upcoming series against Australia.

That I am very disappointed would be an understatement but I have learnt to take such things in my stride and just keep on doing my best and that is what I am doing in the PSL.

I know I still have plenty of cricket left in me and I can make an impact in the World Cup but rest is up to the selectors. But, yes, I would like to know where my future stands.

Wahab claimed that he remains hopeful and he has to prove his worth in the crucial next games for Peshawar Zalmi.