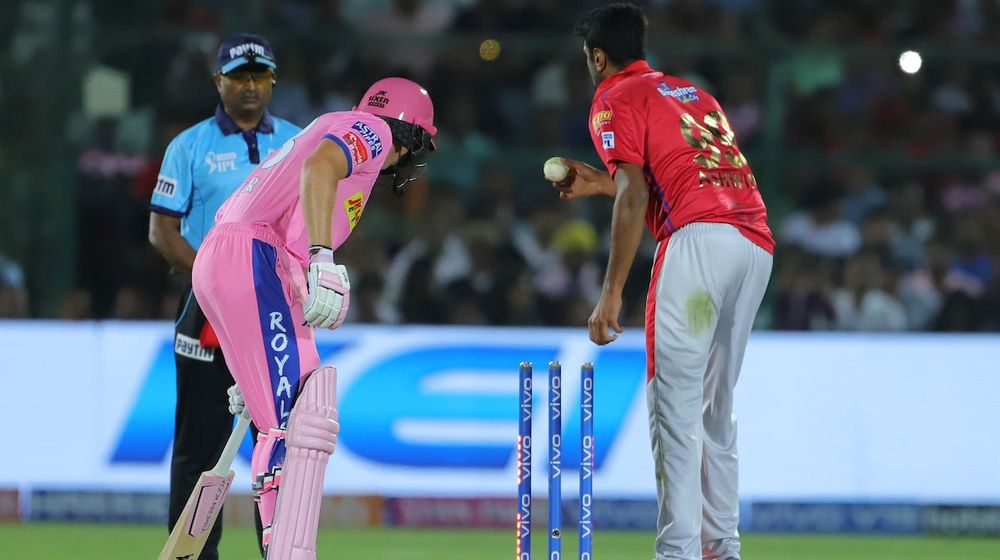 While many Pakistanis are not able to watch the Indian Premier League (IPL) 2019 due to a ban imposed by the government, the cash-rich league has been a talking point on social media following last night’s match.

The debate started following a controversial dismissal of Jos Buttler, who plays for Rajasthan Royals, by Kings XI Punjab captain Ravichandran Ashwin. The bowler mankaded Buttler when he was batting at 69 and left the popping crease.

While the act may have won KXIP the match, it has sparked a huge debate on whether it is in the spirit of the game or not. It is permitted by law to dismiss a batsman if he leaves the crease.

Without any further ado, here’s what happened.

Here’s what the Twitterati are saying on the controversy.

Here’s a side by side comparison of his normal delivery versus the mankad.

The footage clearly shows the bowler never intended to bowl and he just mimicked his action just to run him out. If this isn’t cheating, we don’t know what is.

I have been getting messages and tags and mentions from upset Indian cricket fans all morning – some angry, some supportive – because they have mistaken me for English cricketer Jos Buttler, it's been quite a day for me on twitter dot com https://t.co/ikEO8w8lmP

You better stay behind the line.

Gotta stay behind the line when Ashwin is bowling#RRvKXIP #IPL2019 pic.twitter.com/AgREFlET9K

Players who had integrity, unlike Ashwin.

Batsmen at the bowlers end when Ashwin bowls. pic.twitter.com/EKaEfnkY5J

And to all the people (including ex players) saying it’s in the laws of the game, but you don’t like what he did & you wouldn’t do it – I ask you this “why wouldn’t you?” ! Simple answer – it’s disgraceful and embarrassing plus it’s against the spirit of the game !

What an absolute disgrace! @josbuttler spitting tacs and rightfully so!!! #RRvsKXIP

Ashwin and KXIP lost quite a few supporters last night.

Worst win for you @ashwinravi99 you are very unprofessional and arrogant cricketer who only want win at any cost..unsporting behaviour.. and I am from mohali and now you loose our support too.@josbuttler https://t.co/xJ6t4539Bu

Not good from Ashwin.

He is well within the line, not good from Ashwin pic.twitter.com/Rcf4AyCUtS

No fair play award for KXIP this year, for sure.

Who is to blame?

Ashwin is entitled to appeal

I thought the TV umpire made the incorrect decision

Shouldve been dead ball….. play on

The 32-year old has been facing quite a lot of hate from social media users around the world for his behavior.

Do you think the rule of mankading is fair and what Ashwin did does it even count as mankading or was it plain deception? Let us know in the comments section.