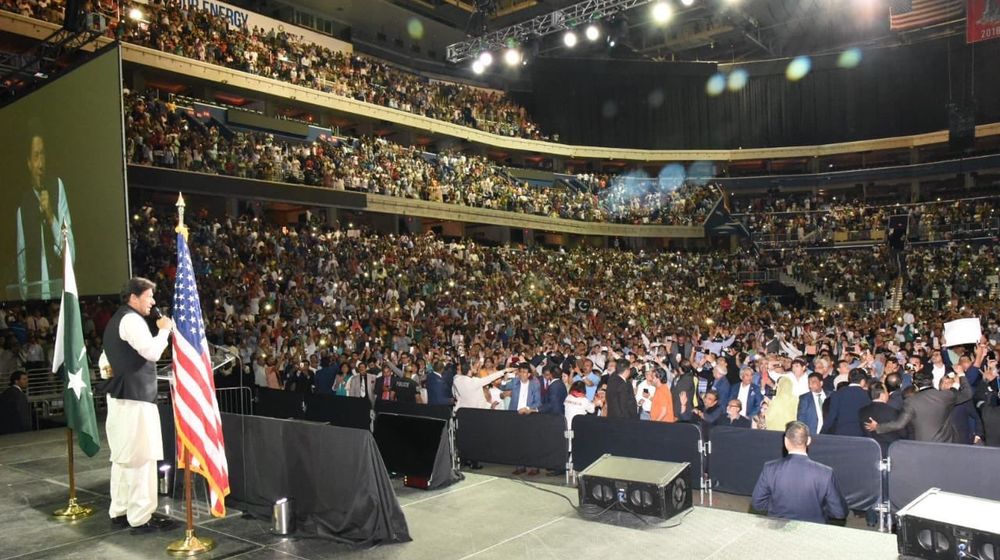 Imran Khan is a crowd-puller, there has never been any doubt about it. He has proven it once again, away from home in Washington DC, where he addressed the Pakistani community in the United States during his first official visit to the country.

Leaving the politics aside, the gathering, aka Jalsa, is a testament to Khan’s popularity in the Pakistani expat community across the globe. He received a heartwarming welcome from the Pakistani community in the United States as people kept coming in where Imran Khan delivered his speech.

The Capital One Arena, which has a capacity of around 25,000, was jam-packed to see Imran Khan and listen to what he had to say about those living abroad for livelihood. Ever since he came into power last year, Khan has always said that overseas Pakistanis are close to his heart, which might be the reason why people turned out in numbers to witness the historic event. There were reports that people had flown in from Canada and other countries to catch a glimpse of the superstar-esque PM of Pakistan.

Twitter is swarmed with all sorts of messages regarding the premier’s visit to the States. Here are the top trends on Twitter in Pakistan:

Not just this, the hashtag #PKIKJalsainUS was the top trend worldwide.

Let’s see what people are saying about the Jalsa, which reminded us of the Dharna days.

He brought in the crowds as a cricketer wherever in the world he played and now as a politician Imran Khan brings in huge crowds everywhere he goes #PMIKJalsaInUSA pic.twitter.com/MeBuwhYInC

The magic & magnanimity of PM @ImranKhanPTI can be observed at the #PMIKJalsaInUSA.

Crowd he pulled out of homes is not which one can buy with one's deep pockets. It's the love &trust for the dream of Naya #Pakistan.

Message for all stake holders, internal as well as external. pic.twitter.com/QsMy6BVKUE

Mohammad Hafeez liked what he saw:

So did Waqar Younis.

You are a Legend Skipper !!! What a gathering.. No one in the history of Pakistan has achieved what you have.. Keep going Skip, we are right behind you @ImranKhanPTI pic.twitter.com/9Izg4CKHZ5

Faisal Javed Khan knows how to warm up the crowd.

Our very own @FaisalJavedKhan takes the stage in his signature style!

Some scenes from the arena.

The best-kept secret yet?

For all those who doubted, your criticism just kept charging me up. #OverseasPakistanis 🇵🇰🇵🇰🇵🇰 are the best kept secret yet .. out of words to Thankyou !#PMIKJalsaInUSA#PMIKInUSA pic.twitter.com/N5dv7Owqi0

No that's not a cinema.
That's people gathering for #PMIKJalsaInUSA pic.twitter.com/dLmuLKZsfw

Naya Pakistan isn't just a slogan its an ideology.#PMIKJalsaInUSA pic.twitter.com/6CWFxGCKxc

On a lighter note: