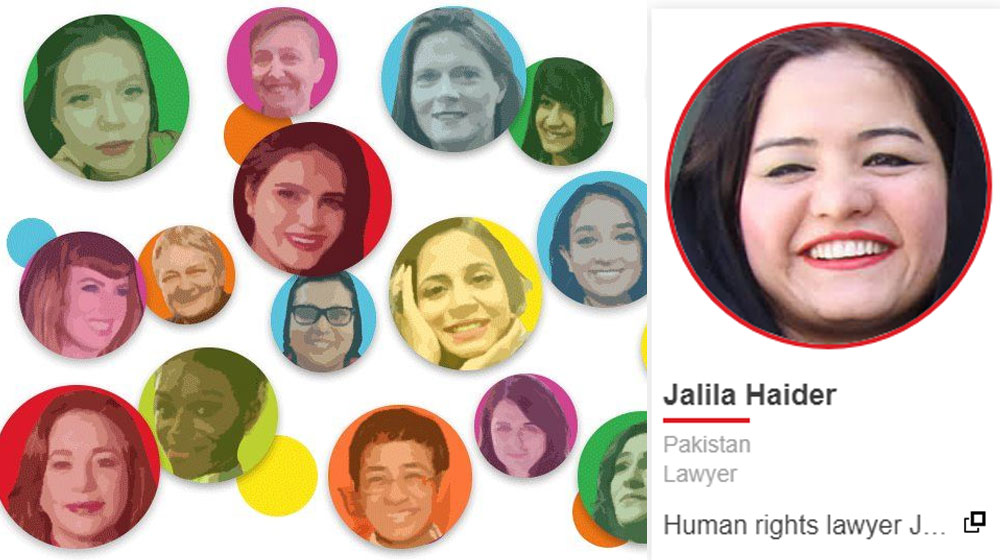 The British Broadcasting Corporation (BBC) has included Jalila Haider, a Hazara woman from Quetta, Pakistan, in its ‘100 Women of 2019’ list.

2 great women I strongly admire are on this year’s @BBC100women list.
Parveena Ahanger of @_APDP & Jalila Haider @Advjalila.
In the 21st century we had to send a footman to Praveena Ahangar’s home in Srinagar to get details. And share the information.https://t.co/lJsIaqu8IG pic.twitter.com/MHdDcNytTx

She is running a non-profit organization called ‘We the Humans,’ which provides the struggling women and children of her community with opportunities.

BBC has enlisted her as the ‘first woman lawyer from the Hazara community.’ Jalila attracted media attention in 2018 when she went on a hunger strike demanding protection for her people. She is a prominent voice against Hazara killings and raised her voice for missing persons in Balochistan.

Being counted among the top 100 women from all over the world was a moment of profound joy for the 28-year-old activist.

Wow, This is an honor for me that I am among the @BBC100women list 2019 from Paksitan. I want to congratulate Parveen Ahanger @_APDP also to be the among the list. More power to the brave women of Kashmir.@nighatdad @mariaItarana @BBCWorld @BBCUrdu @IsmatShahjahan https://t.co/xMdFEK2hxc

She also congratulated the leading human rights activist from the Indian Occupied Kashmir, Parveen Ahanger, for making it to the BBC’s list.

Among other prominent names on the list are Precious Adams from the United States, Jasmine Akter from the Rohingya community, and Zarifa Ghafari, the first female Town Mayor from Afghanistan.