Pakistan Housing Authority Foundation and Provincial Housing Authority Khyber Pakhtunkhwa have signed a memorandum of understanding (MoU) to establish a housing society in the province at an estimated cost of Rs. 97 billion.

The signing ceremony took place in the Chief Minister House on Wednesday. It was attended by the Federal Minister for Housing Chaudhry Tariq Bashir Cheema, Provincial Information Minister Shaukat Yousafzai, and other senior officials. 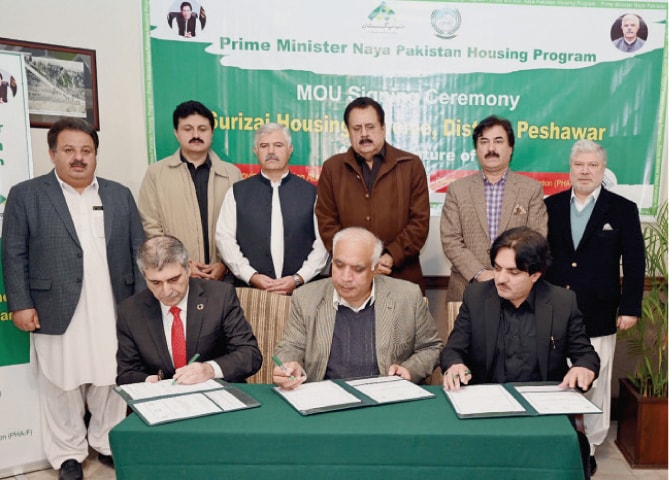 After the ceremony, Chief Minister Mahmood Khan was briefed about the scheme, which is scheduled to complete within three years of its launch.

The provincial government has also allocated a budget of Rs. 97 billion for the scheme that will be developed under the umbrella of the Prime Minister’s Naya Pakistan Housing Scheme. Under the project, the government will construct 15,500 grey structure houses of various sizes over 8,500-Kanal land in Surizai, 10 kilometers from N-55 Indus Highway on Main Canal Road Peshawar.

As per a statement, the land for this project has already been procured for Rs. 1.03 billion, whereas the KP government will provide another Rs. 32 billion for construction of the boundary wall and Rs. 500 million for mobilization.

Illegal Housing Societies are Going to be Regularized in Punjab

The project will have a 10-km dual carriageway along both sides of the irrigation canal, starting from the Zangali checkpost to the project site.

Moreover, the scheme will have 31 mosques, 31 schools, one college, one hospital, 31 dispensaries, 31 neighborhood parks, one grand park, and a large community center.