The Federal Board of Revenue (FBR) has launched a crackdown against the traders involved in the sale of counterfeit cigarettes.

It was revealed that it has also started a countrywide awareness campaign among the traders to avert them from selling non-duty paid items.

The FBR’s spokesperson tweeted, “FBR has launched a crackdown against the traders/businessmen involved in illicit trade of counterfeit cigarettes and tax evasion”. 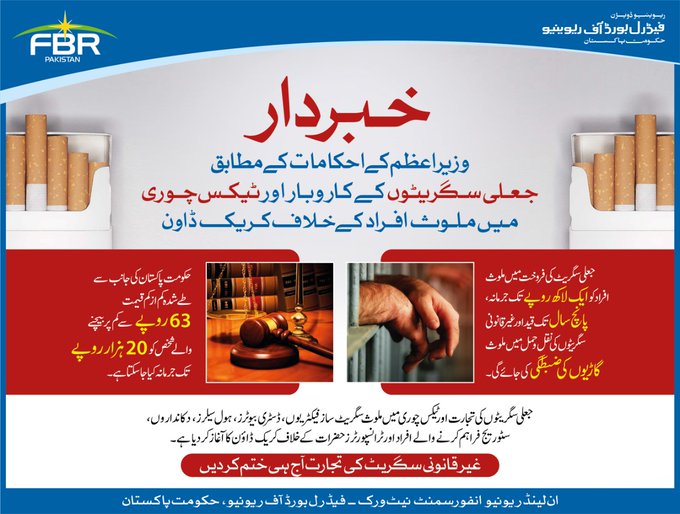 The revenue authority launched the enforcement exercise against the sellers of non-duty paid and counterfeit cigarettes in different markets of the country on the directions of the Prime Minister.

This is for the first time that FBR has also started an awareness campaign among the traders to remain cautioned while selling counterfeit cigarettes or face punishments and heavy fines.

In this connection, Inland Revenue Enforcement Network (IREN) has been empowered to obtain logistic and human resource support from Customs when required in order to conduct enforcement actions. The territorial Collectorate of Customs will provide complete assistance to the IREN in this regard.

This FBR order has been issued on Monday with the approval of the FBR Member IR Operations and FBR Member Customs Operations. The logistic and human resource support from the Customs department will help the IREN to take action against the sellers of counterfeit cigarettes.

Prime Minister Imran Khan had expressed his concern over the growing illegal trade of cigarettes in Pakistan and has ordered a countrywide crackdown on the illicit import of cigarettes.

The country suffers an annual loss of Rs. 30-40 billion because of the illegal tobacco trade, as it is hurting the documented and compliant sector. The recent increase in illicit trade is undermining various measures taken by the government to effectively address this public health issue which is also causing considerable losses to the national exchequer on account of tax evasion.

According to the data, the illicit cigarette trade in Pakistan comprises smuggled cigarettes and locally manufactured cigarettes, the former is openly available in the market without the mandatory graphical health warning, while the latter is available at price points of Rs. 20-35, which is less than the government-mandated minimum price of Rs. 62.76.