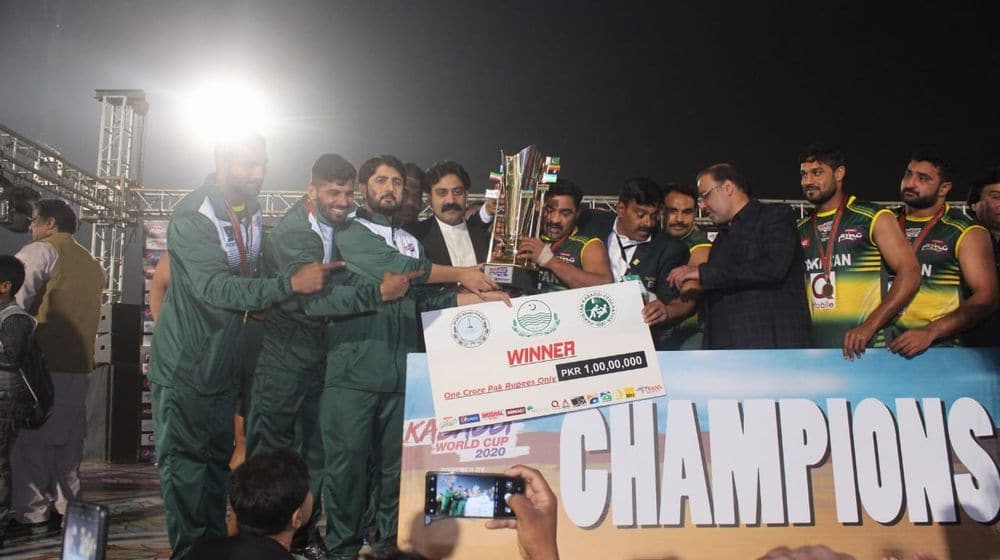 Pakistan has finally managed to win their first-ever Kabaddi World Cup title after suffering losses in four consecutive finals at the hands of India. Fittingly, Pakistan defeated India at home to clinch the prestigious trophy this time around.

The successful event also gave out a strong message to the world that Pakistan is safe for sports.

After squash, hockey, cricket, and snooker, Pakistan has now done it in kabaddi. The grand finale attracted an electric crowd in Lahore’s Punjab Stadium as Pakistan took on India in the all-important clash of the rivals on Sunday.

Looks like February is a not a lucky month for India (pun intended). Pakistan captain, Muhammad Irfan aka Manna Jutt, is a Pakistan Air Force officer, according to some reports.

After a see-saw battle, the Green Shirts managed to finish 2 points clear of India, winning the final by a scoreline of 43-41. It was a come-from-behind victory for Pakistan, taking the defending champions by surprise.

Social media was, and still is, abuzz with messages of love for the pehlwans who didn’t disappoint. It was also the first time Pakistan got to host the mega event. Let’s have a look at some of the tweets from politicians, celebrities and cricketers, congratulating the team on their impressive win.

Congratulations to the Pakistan Kabbadi team for winning the Kabbadi World Cup after defeating India.

Congratulations to the Pakistan Kabaddi team for winning the #KabaddiWorldCup2020. We should dedicate this win to 'peace' in the region and the world. You have made us proud.

43-41 is the final score. And that’s after being down after the first half. Fantastic effort from the boys to crown Pakistan Kabaddi champions. Thank you to all teams for coming to Pakistan! #KabaddiWC2020 #ibleedgreen 🇵🇰 pic.twitter.com/pkrpLf97rz

COAS extends felicitations to Pakistan team on winning Kabaddi World Cup 2020. All participating teams performed well. Both finalists, competing in true spirit of the game, displayed exceptionally high standard of expertise in a closely contested game and deserve to be applauded

What an entertaining final Pakistan is the world champions of the 2020 Kabaddi amazing final of a fantastic tournament which I always look forward to! 🙌🏼#KabaddiWC2020 #ibleedgreen 🇵🇰 pic.twitter.com/EvEs2j9Mvk

Congratulations Pakistan on winning the Kabaddi World Cup after winning a closely fought FINAL against India in Lahore. Loved the Punjabi commentary. #KabaddiWC2020

Wahab Riaz wants Punjabi commentary in PSL too. Do you?

Any one else loving the punjabi commentary? Wouldn’t mind it for the PSL too😂 #KabaddiWC2020