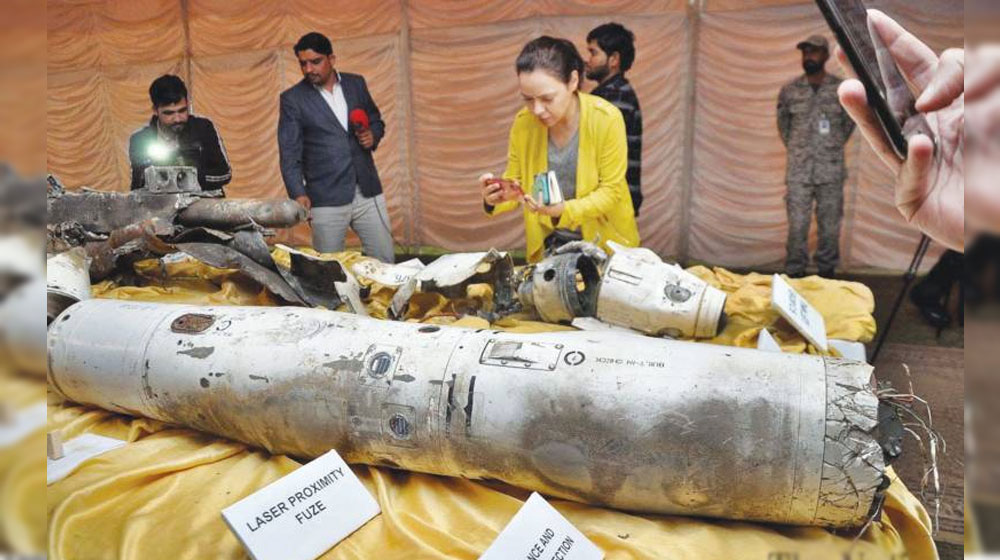 Pakistan Air Force (PAF) has displayed all four unused missiles recovered from the wreckage of Indian aircraft that was downed on February 27, last year. The move has exposed the Indian Air Force’s (IAF) false claim that it shot down a Pakistani F-16 during the airborne dogfight in which it lost two fighter jets and had its pilot captured.

The wreckages are of the Indian jet, piloted by Abhinandan Varthaman, which crashed within the Pakistani territory. Though Pakistan returned the pilot as a peace gesture, it preserved the wreckage of the plan as a souvenir.

The PAF has now showcased the ruins for local and international media to have a look, inquiring if all the missiles were unused, how did the Indian pilot shoot the PAF aircraft?

The wreckage on display included the right and the left-wing of the Indian jet carrying two Beyond Visual Range (BVR) and Short-Range Missiles each. Though some parts of the missiles showed burn signs, all the components were intact to suggest that no missile was fired; thus, no damage could have been done to any PAF aircraft.

As a ‘face-saving’ tactic, the Indian authorities had claimed that Abhinandan had downed an F-16 fighter of Pakistan before his jet was hit.

Director Media Affairs and Spokesperson PAF, Air Commodore Syed Ahmer Raza, was shocked that the Indian pilot who lost the air combat, lost its jet, and got captured by the enemy, was awarded gallantry award by the government of India.

He informed the press that the Indian MiG-21 Bison was not an obsolete version of the fighter jets. He maintained that all the IAF planes that flew to engage PAF jets were locked, but Pakistan showed restraint.

When asked if the US official’s visit straight after the aerial battle was meant to ascertain the Indian claims, he said:

They [Americans] have an idea about the number of F-16s we have and the visit of the US officials was part of the ongoing process.

The Air Commodore, however, dodged a question if any F-16 was used in the fight.

The PAF official also discarded the notion that an Israeli pilot was also captured along with Abhinandan. He clarified that the pilot and the ejection seat landed separately as they had two different parachutes. The public on the ground took the two as two pilots landing on the ground.