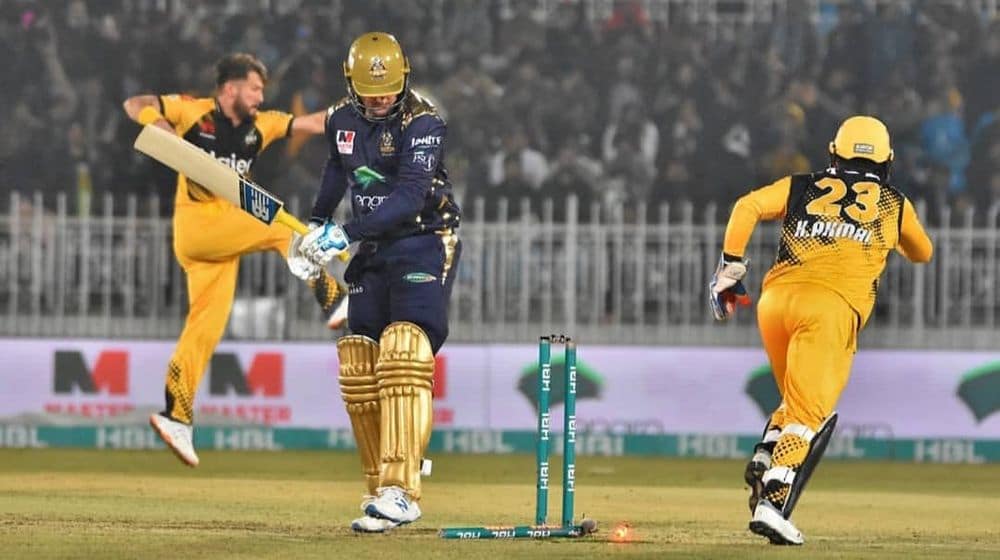 Quetta Gladiators won the toss and elected to field first after a rain delay that reduced the match to 15 overs per side.

Despite a slightly sluggish start, Peshawar Zalam batsmen were in the mood to express themselves in a rain-curtailed affair at the Rawalpindi Cricket Stadium.

Kamran Akmal’s 2 fours and 2 sixes in a 23-runs innings laid the platform on which Haider Ali and Shoaib Malik capitalized. The under-19 star scored 39 from 24 whereas the senior player went on to make a 27-ball 54.

The carnage meant that Zalmi posted a massive 170/6 in their 15 overs. Naseem Shah limped back to the dugout which is a worrying sign not just for Quetta, but for Pakistan as well. Mohammad Hasnain was expensive but picked up 4 wickets.

Quetta Gladiators started brilliantly as the openers, Shane Watson and Jason Roy, looked like making a game out of the chase. Watson fell at the team score of 45 in the 5th over. Roy played some good strokes as he scored 45 off 26 before being knocked over by Yasir Shah at 75/2.

Ben Cutting, who came out to bat at number 4 thanks to his six-hitting prowess, got going straight away, smacking only his second ball for a six. The batsmen lost their way in the middle when a couple of quick blows dented their progress.

It was always going to be a very tough chase and Quetta ended up on the losing side.

After a one-sided contest that saw Islamabad United defeat Lahore Qalandars by a record-breaking 71 runs, we are likely to witness another match marred by rain.

It has been raining constantly in Rawalpindi and there is a forecast for rain throughout the day, meaning that it is highly unlikely that the match will go on as scheduled.

If the match is abandoned, both teams will share a point each. The two teams are currently ranked at 4th and 5th on the points table.

It is the El-Classico of PSL and Quetta has a 8-6 winning record against Peshawar with one game ending without yielding a result. In the previous outing earlier this season, Zalmi defeated the Gladiators with ease.

Peshawar Zalmi:
Wahab Riaz hasn’t had the impact he’s used to having in PSL. He needs to step up his game to increase his team’s chances of winning against strong teams.

Quetta Gladiators:
Having tried Ahmed Shehzad and Ahsan Ali, Quetta can now resort to the services of Khurram Manzoor, who has a proven track record of pinch-hitting in the Powerplay overs.