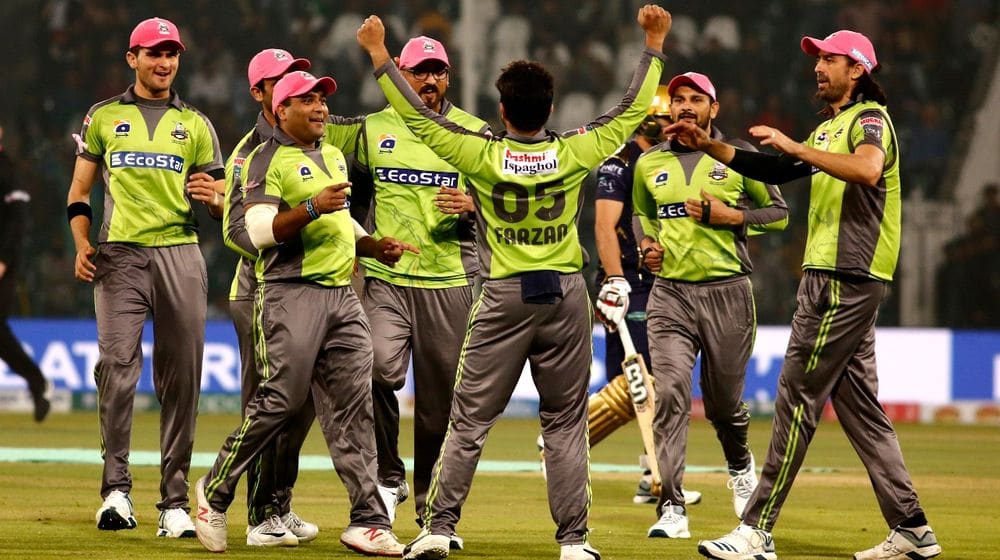 Lahore Qalandars won the toss and elected to field first on a turning wicket in Gaddafi Stadium Lahore.

If Lahore Qalandars enjoy playing against one team, its Quetta Gladiators. Every time they play Quetta, records tumble. Much like the previous match against Quetta, the Qalandars were rampant yet again.

Bowling first, Qalandars had the opposition reeling on 21/6 at the end of the Powerplay. The only batsman to enter double figures in the top 7 was Mohammad Nawaz, who got out after making 10 runs at a strike rate of 38.46.

Samit Patel made the most out of the conditions, registering third-most economical figures in PSL history. He picked up 4 wickets for just 5 runs in his 4 overs including a maiden. Sohail Khan top-scored with 32 as the Gladiators managed to put only 98/9 on the board, their second-lowest total in PSL history.

Fakhar Zaman provided an explosive start in the chase, scoring 20 from just 13 before being bowled out by Mohammad Nawaz.

Mohammad Hafeez and Ben Dunk made sure that there were no twists after Sohail Akhtar’s stumping. The two senior pros got Lahore Qalandars over the line with 8 wickets in hand.

Gaddafi Stadium Lahore will be buzzing again tonight as the home team, Lahore Qalandars will take on defending champions, Quetta Gladiators for the second time this season.

The last time two teams met was a few matches ago when Ben Dunk smashed plenty of records as the hosts crushed the opposition with ease.

Fans would be hoping for a similar performance from their home team whereas Quetta will be itching to prove a point this time around.

Sarfaraz XI have a 5-4 winning record against Lahore Qalandars. Sohail Akhtar’s men will be hoping to square things up while the Gladiators have plenty at stake in terms of the qualification scenarios.

Lahore Qalandars:
Ben Dunk single-handedly won the match for Lahore Qalandars last time they met Quetta Gladiators and he will be hoping for a similar day out.

Shane Watson has not been up to the mark this season, however, a big innings is not far away.