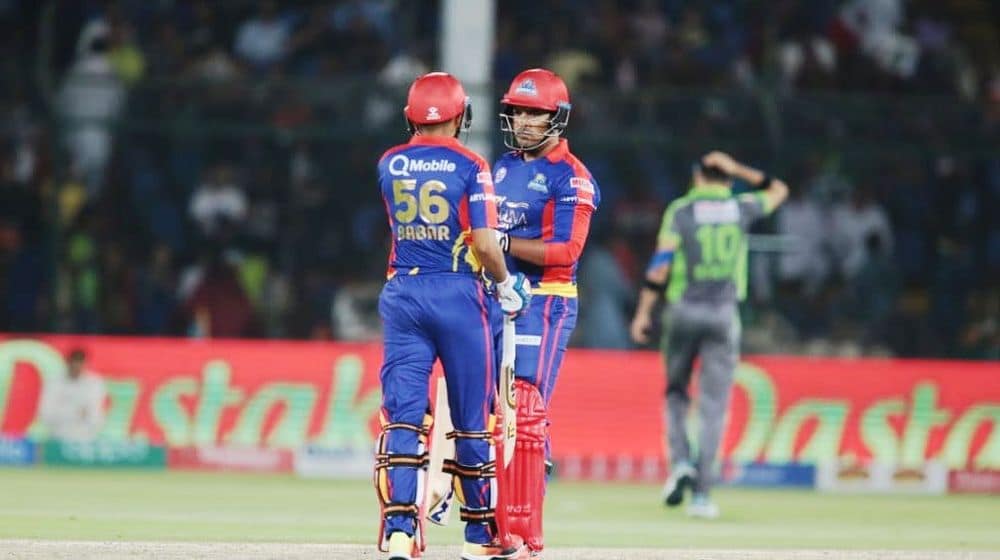 Karachi Kings won the toss and elected to field first in front of their home crowd. It would be the last time they play before them as the upcoming matches will be held behind closed doors due to coronavirus.

Lahore Qalandars’ openers, Fakhar Zaman and Sohail Akhtar started off brilliantly, adding 49 in the Powerplay before Fakhar got out on the last ball of the 6th over.

The Australian duo of Chris Lynn and Ben Dunk failed to have an impact that the fans were expecting from them, however, the captain smashed another half-century to lay the platform for later overs. He scored a well-made 68 from 49 balls.

A late cameo from Mohammad Hafeez following some good bowling in the middle by Karachi bowlers helped the away side post 150/5.

On a pitch where average first innings score is over 185, a target of 151 with the likes of Babar Azam, Alex Hales and Sharjeel Khan in the top 3 looked like a walk in the park.

Two early reprieves for Sharjeel Khan didn’t help Lahore’s cause either as the home side kept cruising along in the chase without any difficulty.

Both Sharjeel and Babar registered their fifties to get their team over the line for two crucial points. Babar finished with 67* while Sharjeel also carried the bat with 74*.

It was carnage what Ben Dunk of Lahore Qalandars did with Karachi Kings on Sunday evening. His 43-ball-99* including 12 sixes and 4 fours made every Lahori fan dance in the stands.

Not only did he win the game single-handedly, but also made plenty of new records in the Pakistan Super League (PSL). Qalandars, who now stand on the third position, will be eyeing a similar performance when they lock horns with arch-rivals Karachi Kings tonight away from home.

#Dunk: All the Hilarious Memes After Lahore’s Dunk-Powered Victory

It will be a perfect opportunity for the home side to avenge the humiliating defeat and secure its position into the top 4. A win today will take them to 9 points with two games to go, strengthening their chances for the next round.

Lahore’s win, on the other hand, will pretty much book their berth for the playoffs, almost shutting down the doors for Islamabad United and Quetta Gladiators. So, today’s game is of great importance for all the teams.

Out of the nine matches the two sides have competed in, Karachi Kings have enjoyed an upper hand against Lahore Qalandars with 5 wins while Sohail Akhtar’s men have won 4.

It wouldn’t be wise to disturb the winning combination, however, Lahore would be tempted to try one of their leggies in today’s game, as the ball grips slightly in Karachi.

The home team’s bowling has mostly been doing its part. It’s time for their top order to spend more time on the crease and pile up runs.

Chris Lynn and Fakhar Zaman returning to form is a massive plus for Lahore. With momentum on their side, you can expect Lynn, Zaman, and Dunk to fire with the bat. Shaheen Afridi’s form with the ball is another positive for Qalandars.

Sharjeel Khan hasn’t quite built upon quick starts he has had so far. It would be the day for him to go big alongside Babar and Hales.