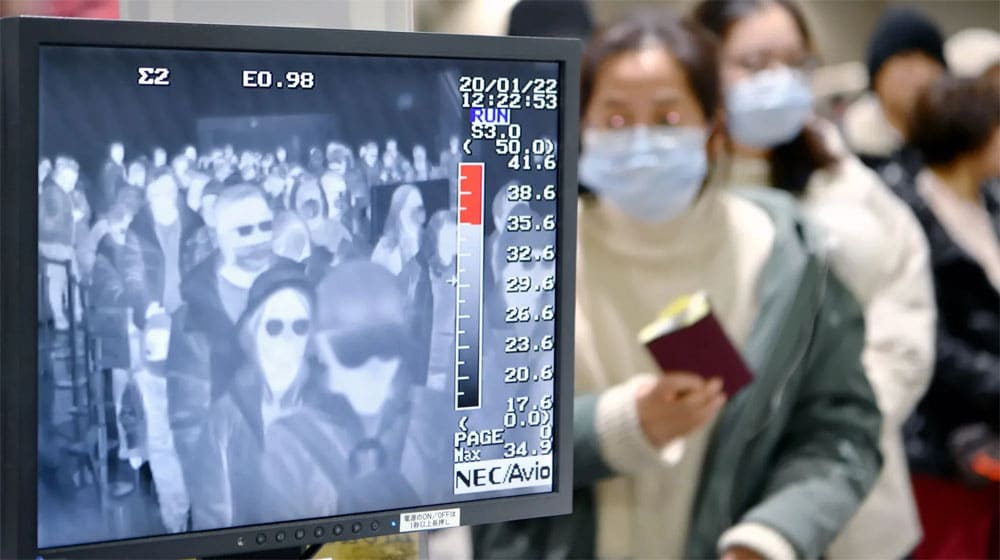 In a major development, the World Health Organization has declared COVID-19 a pandemic, saying it is not a word to use lightly or carelessly.

“In the past two weeks, the number of cases of COVID-19 outside China has increased 13-fold, and the number of affected countries has tripled,” he added. So far, there are 118,000 cases reported in 114 countries while 4,291 people have lost their lives. Thousands more are fighting for their lives in hospitals, Tedros informed.

The WHO chief warned that in the days and weeks ahead, the number of cases, deaths, and affected countries were expected to climb even higher.

Pandemic ‘Not a Word to Use Lightly’

Tedros stressed that Pandemic was not a word to use lightly or carelessly. “It’s a word that if misused can cause unreasonable fear or unjustified acceptance that the fight is over leading to unnecessary suffering and death.”

Last week, Tedros had warned that countries were not taking the coronavirus crisis seriously enough as outbreaks surged across Europe and in the United States.

‘We Will Continue to Keep Pakistanis Safe’

Dr. Zafar Mirza, in response to the WHO announcement, has said that the federal and provincial governments have been working in sync for the past seven weeks to implement the broad cardinals of preparedness and response as the WHO chief has highlighted.

‘We will InshaAllah continue to work to keep Pakistanis safe from coronavirus’, he said.

247/ In Pakistan, the federal and provincial governments have been working in sync for the past 7 weeks to implement the broad cardinals of preparedness and response as DG @DrTedros has highlighted. We will inshAllah continue to work to keep Pakistanis 🇵🇰 safe from #coronavirus

In another tweet, he hoped that the world could still change the course of the pandemic by ‘detecting, testing, treating, isolating, tracing, and mobilizing their people in the response.’

Dr. Zafar added that countries needed to scale up the emergency response by communicating with the people the potential risks and protection measures work.

‘Up to 70% of Germany Could Become Infected’

German Chancellor Angela Merkel warned yesterday that the virus could affect up to 70% of the country’s population.

“Since there was no known cure, the focus would fall on slowing the spread of the virus,’ she said.

In a bid to forestall the spread of coronavirus, Kuwait has announced that it will suspend all commercial flights leaving and arriving in Kuwait City International Airport starting Friday ‘until further notice’.

It is also learned that the country will ‘forbid’ public gatherings including the residents meeting in ‘restaurants, cafes, and commercial centers’.

238 of Qatar’s Quarantined People Get the Virus

All individuals are expatriates and reside in the same compound as the three who were diagnosed with the virus on Sunday.

In Pakistan, Schools to Reopen as Serious Inaction Continues

Saeed Ghani, Sindh Education Minister, announced yesterday that no further extension to school closures was in sight and the schools in the province will reopen from March 16.

While other countries begin lockdowns and severe bans on large public gatherings, Pakistan is only taking half-hearted, cosmetic measures.

Yesterday, the PCB announced that PSL matches scheduled in Karachi will be staged as planned despite threats of a mass-spread. 16 of the 20 confirmed COVID-19 cases have been reported in Karachi.

However, to make the matches ‘safe’ for live spectators, the Sindh government issued an advisory that doesn’t say more than basic prevention methods like handwashing, sneezing or coughing into a tissue, avoiding handshakes, and not spitting.

Meanwhile, the annual Tableeghi Ijtema of Raiwind continues in full swing in spite of the coronavirus crisis. Commissioner Lahore Saif Anjum said that the district administration had requested the organizers of the Ijtema to postpone the gathering but to no avail.

The Securities and Exchange Commission of Pakistan (SECP) has issued an advisory to all companies asking them to modify plans for their annual general meetings in view of the coronavirus threat.

In case the gatherings are unavoidable, proper care must be ensured e.g. presence of hand sanitizers and safe distance between seats. 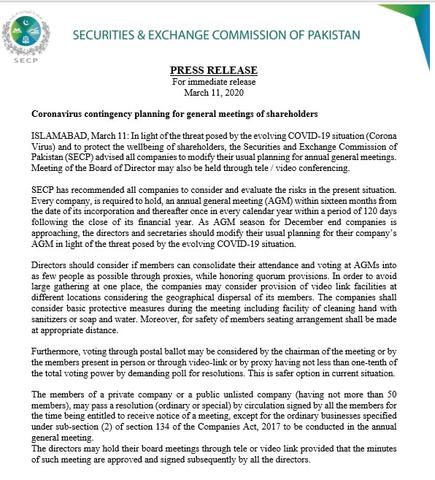 7.15 pm PSL Matches in Karachi to be Hosted Without Any Crowd

The Sindh government has advised the Pakistan Cricket Board (PCB) to conduct the Pakistan Super League (PSL) matches with no crowd to curb coronavirus spread.

The PCB has agreed to the request made by the health authorities, meaning that the PSL matches will be held without any fans in the stands, starting tomorrow.

#SindhGovt has decided that the remaining matches of PSL in Karachi will take place without any crowd. This decision has been made after consultation with all stakeholders including the Pakistan Cricket Board.

6.00 pm Engro offices at The Harbour Front Building to Resume on Monday

Engro has announced that its offices at The Harbour Front Building Karachi will reopen on Monday, March 16. The company had decided to shut these offices for three days as a precautionary measure after an employee tested positive for coronavirus.

The company has also informed that all employees who had come in contact with the affected person were tested and found virus-free.

During the closure period, the office premises are being disinfected and cleaned to ensure safety for all employees. Engro says that it will implement additional safety measures to that end.

As a precautionary measure to curb coronavirus spread, the Baluchistan government has decided to keep the province’s public and private schools shut till March 31.

The announcement was made by the Baluchistan Education Minister Sardar Yar Mohammad Rind who said that strict action would be taken against schools that failed to comply with the decision.

The matriculation exams have also been postponed in the province and the next decision on school reopening will be taken on March 27. He also hinted at the shutdown of madrassahs across the province.

However, the spokesperson for Baluchistan Private Schools Grand Alliance has termed the extension as ‘hostile action’ while rejecting the decision.

4.00 pm Pakistan tally reaches 21 with another positive appearing in Skardu

The count of confirmed coronavirus cases just climbed to 21 with another patient testing positive for the contagious virus, this time in Skardu, Gilgit Baltistan.

The health department official Dr. Shah Ramzan confirmed this, adding that the new patient is a 31-year-old individual who had returned to Pakistan on February 25 after traveling to Iran.

The addition of new case takes the GB tally to 03 so far.

The Punjab government has declared a medical emergency after the WHO classified COIVD-19 as an epidemic yesterday and Pakistan’s tally of confirmed coronavirus cases reached 20 in the past week.

“All the departments have to work together with the health department,” Punjab Health Minister Yasmeen Rashid said while speaking to reporters in Lahore.

The Senate Foreign Affairs Committee has urged the Pakistani government to ‘immediately declare a Health Emergency’.

In its resolution on coronavirus, the Committee has asked the government to establish a National Emergency Coronavirus Task Force in light of WHO’s declaration of COVID-19 as a pandemic. 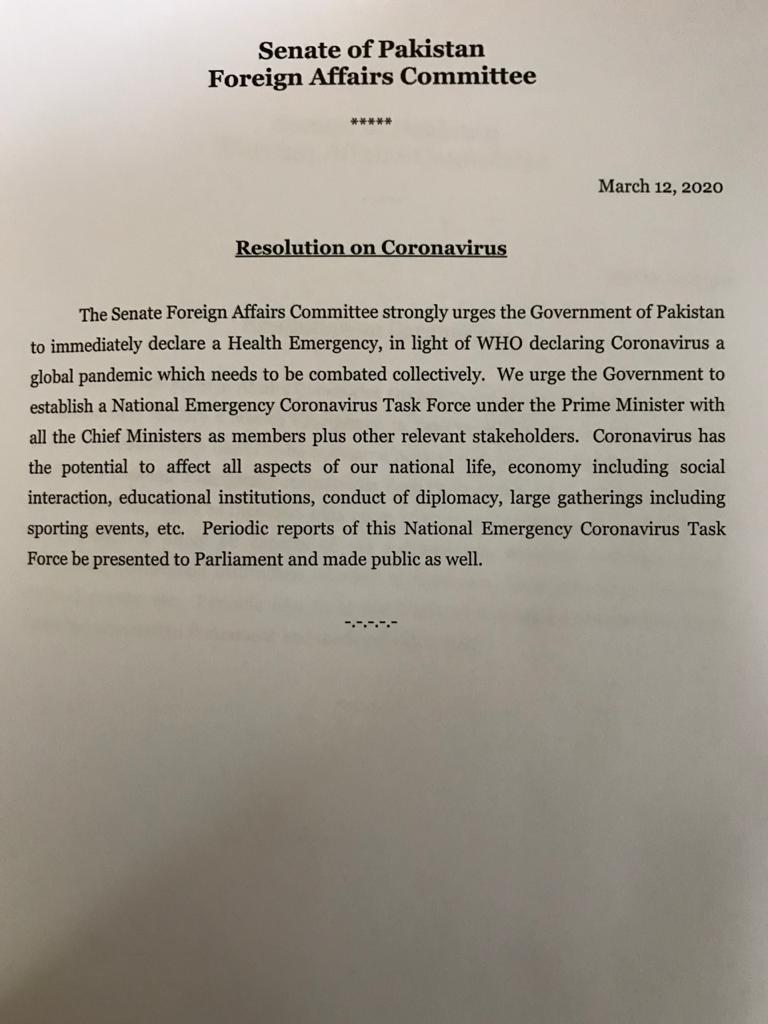 The India government has ordered upcoming international cricket matches to be played in empty stadiums, as travel operators warned of an unprecedented impact of a blanket visa ban by the government to combat the spread of coronavirus.

With just 68 confirmed cases and no deaths, India has so far been relatively unscathed by the virus compared to elsewhere in Asia, Europe and North America. But experts fear that its overstretched medical systems may not be able to handle the type of intensive care required to handle a spike in infections.

In his recent tweet, famed Pakistani cricketer Shoaib Akhter has requested followers to refrain from spreading fake news about coronavirus.

It will be great if we act responsibly, he remarked.

Its a tough & difficult time for humanity all over the world.
Everyone please don't spread rumors/unverified news. It creates panic of all sorts. It will be great if we act responsibly.#COVID #CoronavirusPandemic

A major cricket celebration in Bangladesh this month to mark 100 years since the birth of the country’s founding president has been postponed because of the coronavirus epidemic.

The Bangladesh Cricket Board (BCB) on Wednesday shelved next week’s series of “Mujib 100 events” to commemorate the centenary of Sheikh Mujibur Rahman’s birth, including a concert by Oscar-winning Indian music director AR Rahman and two “Asia v Rest of the World” Twenty20 cricket internationals.

12.00 pm “Major Industries to Relocate from China to Pakistan After Coronavirus Outbreak”

Following the shutdown of economic activities in China after the COVID-19 outbreak, major industries will consider avoiding concentration in a single country like China in the future.

These thoughts were expressed by the Deputy Governor of the State Bank of Pakistan (SBP), Dr. Murtaza Syed, at an FPCCI session. Dr. Murtaza stated that Pakistan will be the likely destination of those industries looking to relocate once the situation improves.

An official statement from the KSA Ministry of Interior read,