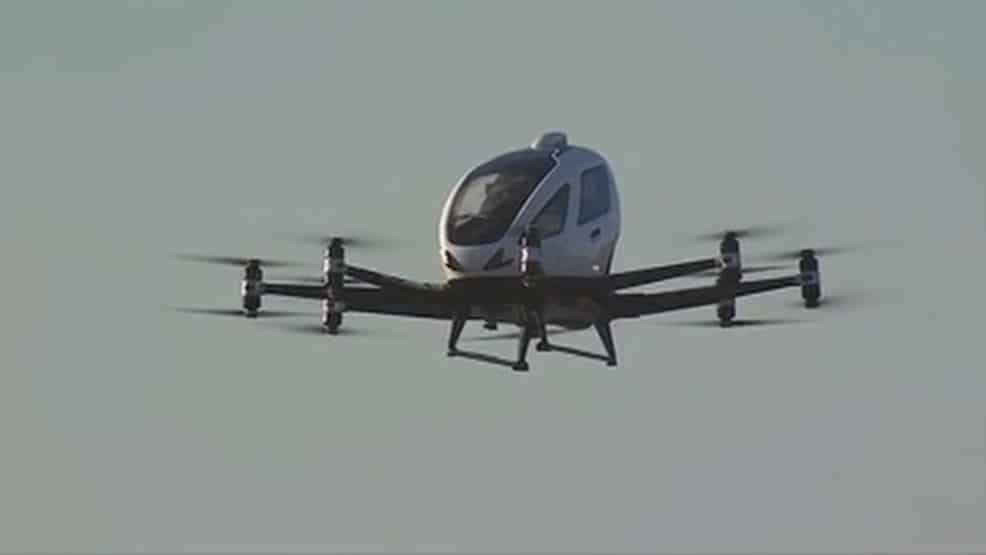 Ever wondered if we’d make it to ‘The Jetsons’ era of technology? Well, if China is to be believed, it looks like we’re almost there. In a new development in the part ‘automotive’ part ‘aeronautical’ arena, China saw the introduction of an unmanned flying taxi by a tech firm called Ehang. This latest unconventional creation has been affectionately dubbed EHang 216, and is intended to particularly circumvent traffic jams.

The EHang 216 is powered by 16 electric rotors that can propel the unit along a pre-determined route at over 80 mph (130 kmph). As reported by the manufacturers of the aircraft, it weighs about 600 pounds (270kg) itself and can carry another 500 to 600 pounds.

Initially, these taxis will only be offered to tourists in order to help them move around the southeastern tourist attractions, with the main appeal of an impeccable sightseeing experience.

In a further development, EHang has also declared partnership with the Hezhou City in Guangxi Province to construct a terminal for these aerial taxis. The terminal will consist of 4 pads, 2 of which will be for takeoff, while the other 2 for landing.

It is being reported that, should their plans come together perfectly, EHang shall be able to offer the flying taxi service to the tourists by the end of this year and the full-on taxi service will be made available in three years.

We encourage the development of the unmanned aircraft industry while ensuring safety. EHang 216 is a passenger-grade AAV quite different from other unmanned aircraft. We will provide our strong support and help accelerate the commercialisation of this innovative air mobility solution.