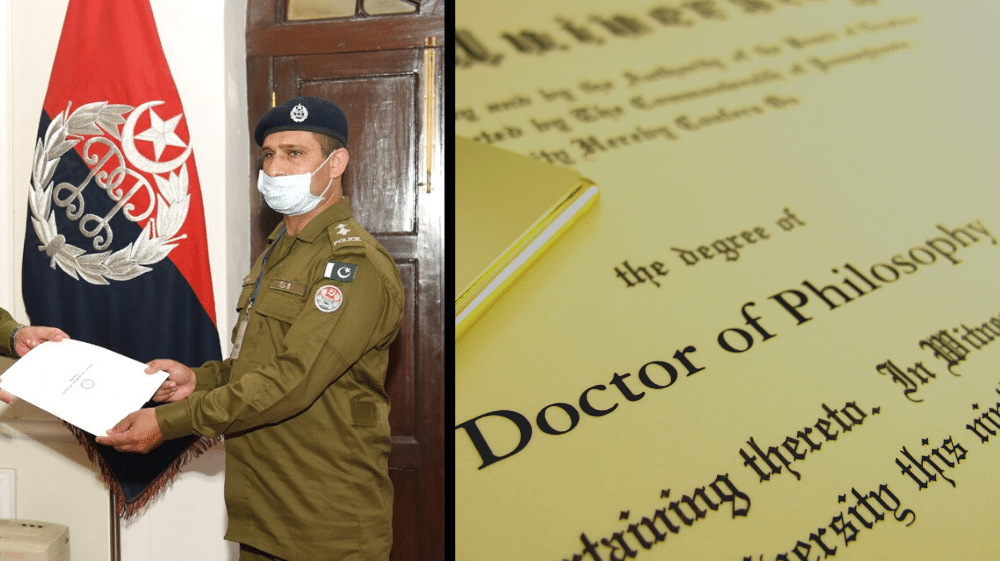 Punjab Police sub-inspector, Dr. Muhammad Irfan, has completed his Ph.D. in Chemistry from Government College University (GCU) while fulfilling his official responsibilities. Irfan completed his Masters in Chemistry in 2007 and is currently appointed as investigation in-charge in Wahdat Colony police station in Lahore.

After completing his Masters, Irfan enrolled in an M.Phil program in 2011 and continued his service alongside his studies. Dr. Irfan said that he used to work in a private company before becoming a police officer but strived hard to complete his education along with managing his job and a family.

In an interview with a private news channel, he said “It was quite challenging to manage everything in his life but I did not give up and Punjab Police supported me as well.”

He said that due to the nature of his job there wasn’t a specific time slot for his study hours, he used to stay up all night to complete his academic research on time “If you believe in something and you’re putting efforts then anything can be achievable” he added.

Irfan added that Punjab police officers cooperated with him and a few times he also got holidays to complete his research work.

I joined the police service as an Assistant Sub-Inspector in 2007. At that time I had completed my master’s degree. After that, I completed my M.Phil from 2011 to 2013 during my service. I started my Ph.D. in 2016. I was posted in different police stations and also posted at investigations wing during my Ph.D. time period.

“Spectroscopy and chemical analysis” the title of Dr. Muhammad Irfan’s thesis looks at the study of the interaction between matter and electromagnetic radiation.

Talking about how difficult his journey was, he said, “I believe, it is the mind which makes things difficult or easy. I have seen people who can’t drink a glass of water by themselves arguing it is a difficult thing to do.”

Irfan expressed his gratitude to the IGP for the acknowledgment and said the encouragement had strengthened his commitment.

I will work harder and with more commitment by rendering my knowledge, abilities, and skills for the protection of the wealth and lives of people and for provision of justice and service delivery to the citizens.