Telecom companies have asked the government for billions in tax concessions to increase their own revenues.

These companies had moved a summary through the Ministry of Information Technology and Telecommunication to the ECC for a number of tax relief measures including abolishing 12.5 percent advance tax.

ECC previously deferred it for the next meeting, but some quarters are advocating the decision to be done in favor of these companies. 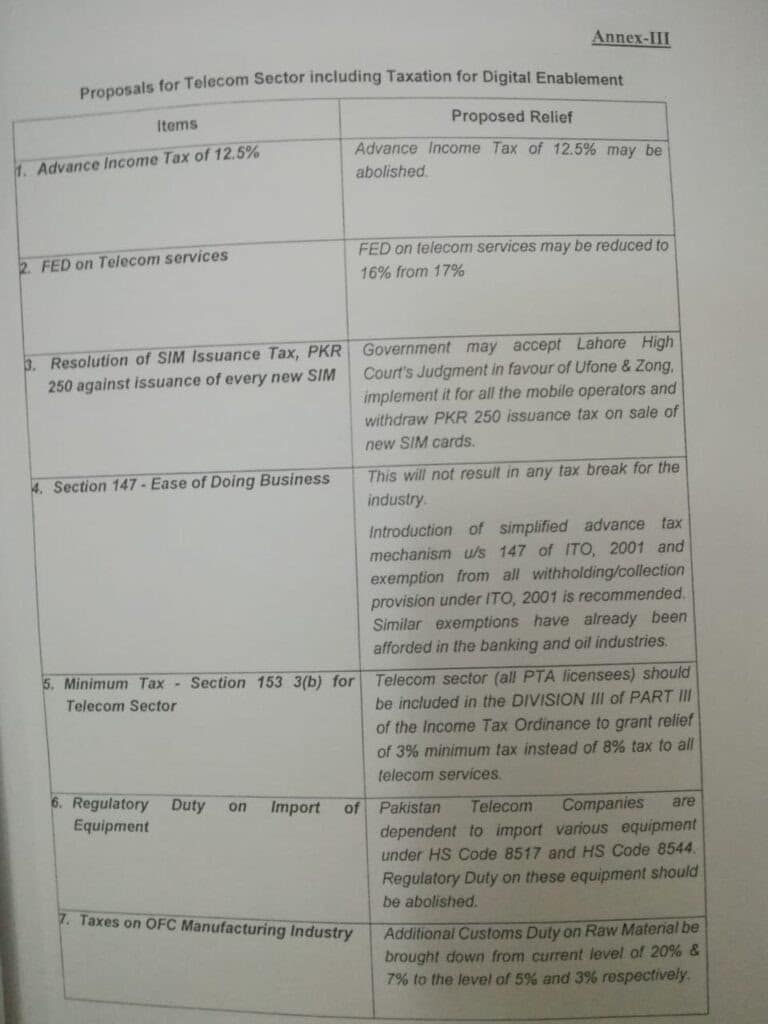 ProPakistani contacted a senior official of the PTA for insight into the matter. He said that the government should thoroughly observe the companies’ demands for tax incentives and their service quality. If the government wants to give them tax relief, then they should also be bound to pass on its benefits to the consumers, otherwise, it will be just an act of financially bolstering the companies while leaving consumers at their mercy.

He further said that the authorities should keep an eye on these activities, as some decision-makers are allegedly serving the interests of these companies and want to give them undue benefits.

Why is the ministry asking for tax relief for these companies? Has the ECC discussed the performance of these companies? Obviously not. The ministry must also demonstrate the other side of the coin to the decision-maker while taking such an important decision.

PTA has recently shown grave concerns over telecom companies’ performances after monitoring their services in various parts of the country. Some have poor signal strength, call connection issues, poor quality service, and overcharging.

The regulatory authority is monitoring their performances and points out their weaknesses and their acts of looting the consumers, but the government is not taking it seriously. Now, instead of holding them answerable for their poor services and overcharging, the government wants to give them tax incentives that will not benefit the consumers but the companies.

These companies always take refuge behind their CSR activities, as under the agreement they are bound to spend a certain portion of their income on CSR. But, now they are using it as a bargaining chip to take advantages and favors from the government in tax relief.

According to the summary that was presented in the ECC meeting, the ministry has categorically signified their CSR activities during COVID-19 and in the next sentence, it has mentioned that the government had given relief to other sectors but not to the telecom sector.

The companies asked for a reduction of federal excise duty on telecom services from 17 percent to 16 percent and withdrawal of Rs. 250 issuance tax on the sale of new SIM cards in the summary. The government was also asked to accept Lahore’s high court’s judgment in favor of Ufone & Zong and implement it for all the Mobile operators.

Furthermore, the ministry has also been proposed to introduce a simplified advance tax mechanism u/s 147 of ITO 2001, and exemption from all withholding/collection provision under ITO 2001. This will not result in any tax breaks for the industry. They stated that similar exemptions have already been afforded in the banking and oil industries.

The ministry also recommended to include the telecom sector (all PTA licenses) in division III of part III of the income tax ordinance to grant relief of 3 percent minimum tax instead of 8 percent tax on all telecom services.

Pakistani telecom companies are dependent on importing various equipment under HS code 8517 and HS code 8544. It has also been proposed to abolish regulatory duty on this equipment and reduce the additional customs duty on raw materials from 20% and 7% to 5% and 3%, respectively. These proposals have also been recommended by Prime Minister’ Taskforce on IT and telecom.