For some people, it seems finding shortcuts to problems is an art. When the shortcut involves the use of illegal or unethical means, which it does more often than not, it comes in the way of access to good services by sabotaging what’s already there.

For example, the common practice of installing water pumps to siphon water from underground tanks, which impacts the overall water flow to other houses in the vicinity; the same is the case with gas pumps.

Of late, a new, yet similar practice has gained hold among Pakistani cellphone users. With the aim to boost GSM signals, users have begun to install GSM signal boosters to improve signal strength. 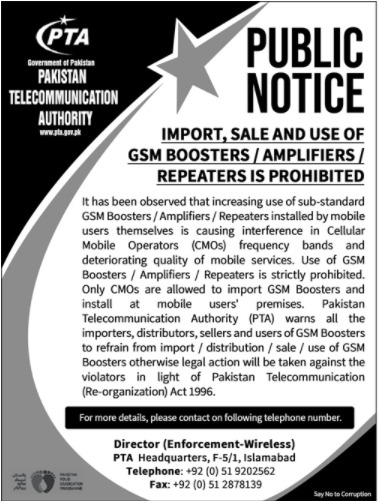 Specifically, as per Section-31, Sub-Section (2) of the Act: ‘the unauthorized use of the radio frequency spectrum shall be punishable with imprisonment which may extend to [three] years, or with fine which may extend to ten million rupees, or with both.’ The same law applies to sellers and buyers of the boosters as well.

Such stringent laws exist, because signal boosters may enhance wireless coverage in a particular area, but more often than naught, they will cause interference with mobile networks’ frequency bands.

This is a big problem for mobile operators in the country, who work to provide greater coverage and better cellphone reception, only to see their efforts thwarted by illegal signal boosters, which not only deteriorate service quality but also create signal issues.

These boosters are also illegal because they use spectrum for which they haven’t paid for.

Following PTA’s order, all leading e-commerce portals have banned the selling of GSM signal boosters as well. Only mobile operators are allowed to import GSM boosters and install them at mobile users’ premises.

Cellphone users should therefore not take risks by turning to crime to combat the problem of weak signals. You may improve your own signal strength but terminate the signals of those nearby and possibly wipe out the mobile phone network.