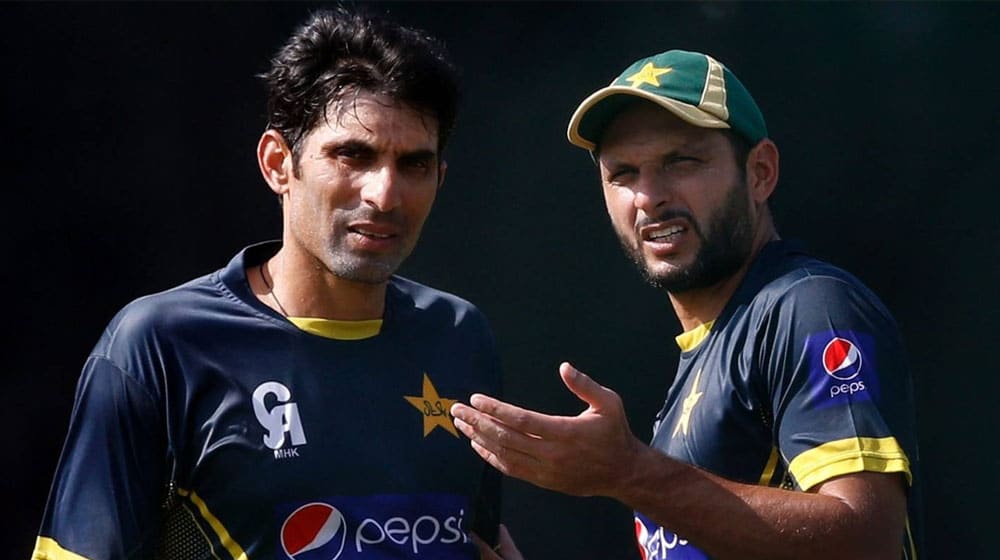 Former star cricketer, Shahid Afridi, has said that Misbah-ul-Haq, the current head coach and the chief selector missed out on a great opportunity during the 2011 World Cup semi-final against India.

“It was a great opportunity that, I believe, we missed,” Afridi said in an interview with Arab News earlier this week.

During the match that India won by 29 runs, the two experienced campaigners Younis Khan (13 off 32) and Misbah (56 off 76 balls) slowed down the chase, which mounted the pressure on the lower order.

Afridi, however, did not blame the former captain for the defeat.

Many say that Misbah played [a] slow inning. First, it’s [the] nature of Misbah, this is his game. He takes enough time [to settle]. He tries to take the game to end. But that situation demanded of you to get the scoreboard going.

The 40-year-old also paid regards to late Bob Woolmer, the former Pakistan coach, and said he was successful because he didn’t do politics and supported players through their grey patches.

He won’t do politics … He knew the strengths of each player, he knew about the weaknesses so when a player wouldn’t perform, he won’t call him names but support him, he would back him.

Boom Boom also said that Pakistani players are missing on a big opportunity by not playing the Indian Premier League (IPL). Afridi believed that players like Babar Azam and others will learn to handle the pressure situation by playing the IPL.

Update: Shahid Afridi has tweeted to clarify his statement. Here’s what he said:

Unfortunately I have been misquoted in this interview. The 2011 defeat was due to batting failure of the team. The batsmen including myself didn't sustain pressure of the chase. No blame on any individual! pic.twitter.com/pgZFrnSWfH