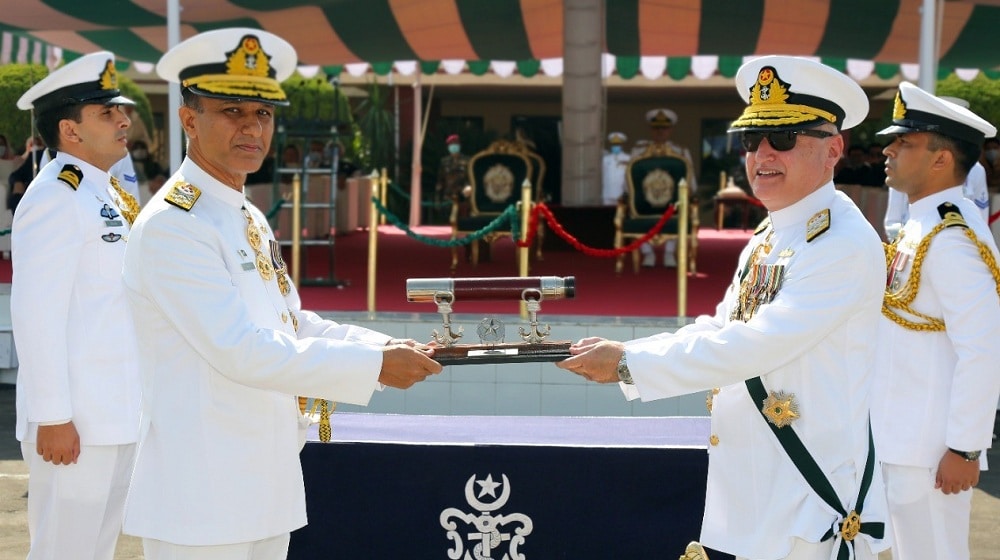 Admiral Muhammad Amjad Khan Niazi HI(M) SBt has assumed the command of the Pakistan Navy as the 22nd Chief of the Naval Staff.

In this regard, a formal ceremony was held at PNS ZAFAR Islamabad on 7 October. Former Naval Chiefs, serving and retired Pakistan Navy officers, CPOs/sailors, and civilians attended the ceremony.

During the ceremony, Admiral Zafar Mahmood Abbasi NI(M) upon completion of his tenure of service, handed over the reins of command by presenting the traditional scroll to Admiral Muhammad Amjad Khan Niazi.

After arriving at the Naval Headquarters, a contingent of Pakistan Navy accorded Guard of Honour to the outgoing Naval Chief.

In his farewell address to Pakistan Navy officers, Admiral Abbasi thanked Allah SWT for enabling him to discharge his duties to the best of his abilities.

He also praised the efforts of the officers and men of the Pakistan Navy who worked as a team to achieve the progress made in all domains in line with his vision.

Admiral Abbasi said that he primarily focused on transforming Pakistan Navy into a combat-ready force with special emphasis on optimum battle preparedness and professional competence.

He mentioned that Pakistan’s civil-military unified stance and diplomatic-military push back, frustrated Indian designs. Pakistan Armed Forces gave a befitting response and won the battle of hearts and minds, shattering the myth of India’s false sense of superiority.

While highlighting the initiatives during his tenure, Admiral Abbasi said that Pakistan Navy raised maritime awareness and channelized efforts to jump-start the Blue Economy.

While relinquishing his Command, Admiral Abbasi thanked the Government, MoD, JSHQ, and sister Services for rendering all-out support to Pakistan Navy in the execution of its sacred responsibilities of seaward defense.

After assuming the charge as the 22nd Chief of the Naval Staff, Admiral Muhammad Amjad Khan Niazi was also accorded with a Guard of Honour.

Chief of the Naval Staff, Admiral Muhammad Amjad Khan Niazi was commissioned in the Operations Branch of the Pakistan Navy in 1985.

A winner of the coveted Sword of Honour, Admiral Niazi boasts a diverse experience of both command and staff appointments.

In recognition of his meritorious services, Admiral Niazi has been awarded Hilal-e-Imtiaz (Military) and Sitara e Basalat. He was also conferred the French Medal Chevalier (Knight) by the Government of France.