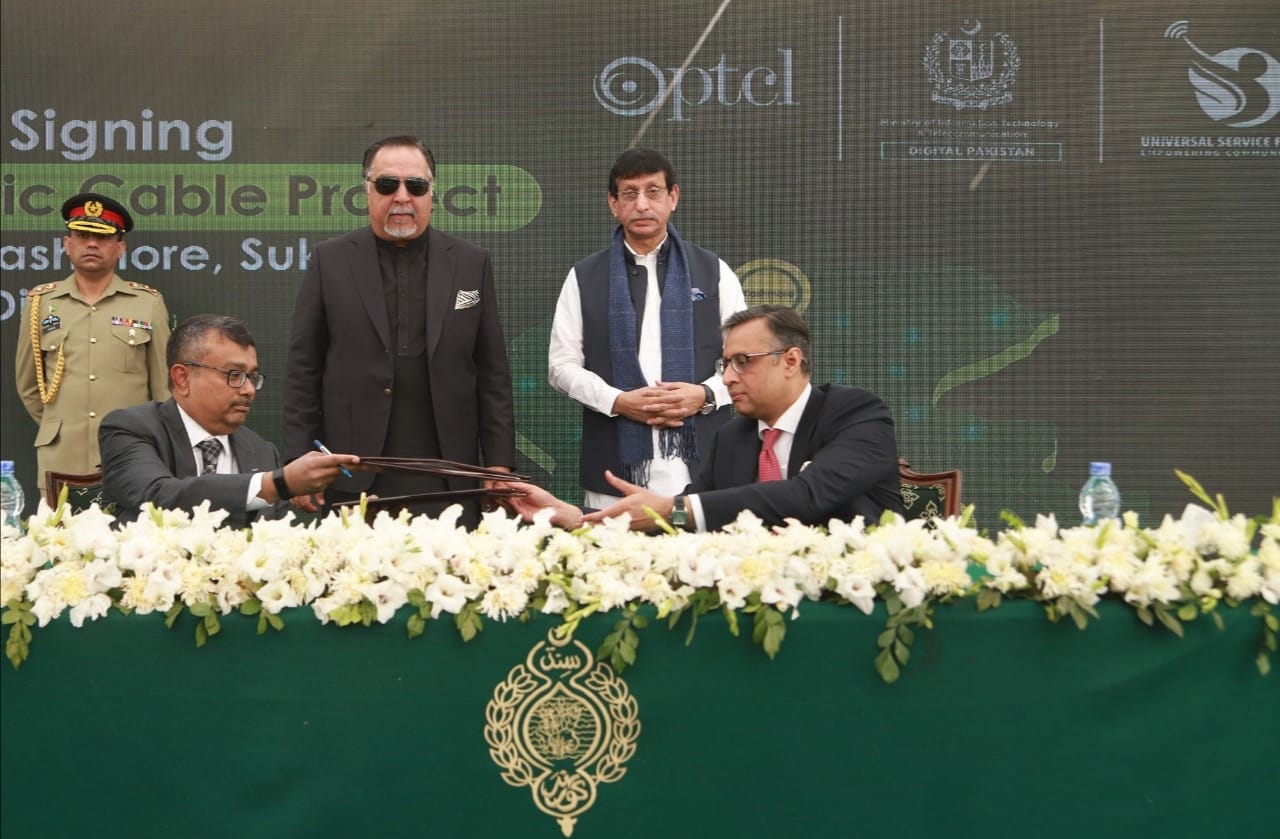 The contract is for providing connectivity in Ghotki, Kashmore, Sukkur, and Khairpur districts at a special ceremony held at Governor House, Karachi.

The contracts were signed by Haaris Mahmood Chaudhary, CEO USF, and Nadeem Khan, Acting CEO & Group Chief Financial Office PTCL. Senior officials of the Government of Sindh, Ministry of IT and Telecommunication, USF, and PTCL were also present at the ceremony.

On the occasion, Imran Ismail, Governor of Sindh, said, “Today’s event marks another landmark achieved in the history of Pakistan and will go a long way in taking the developmental work being done by Government of Pakistan to a greater level.”

He said, “I would like to congratulate Federal Minister for IT and Telecommunication Syed Amin ul Haque, the dynamic teams of USF & PTCL on the award of these projects that have been designed to connect 372 Educational Institutions, 170 Health Facilities, 217 Government Offices, and 131 Banks within 5 KM radius of the node. I wish them all the very best for the implementation of project objectives.”

On the occasion, Haque said, “I believe that Imran Khan, Prime Minister of Pakistan, realizes the importance of information technology for the country as he envisioned Digital Pakistan and proved his commitment to turn this vision into reality. It affirms that when you have support from the premier, even bigger challenges can be turned into opportunities.”

He said, “With this renewed commitment, we took charge of this Ministry and of course, the new way of working to bring instrumental change was not visible to the people at the start of our journey as they did not expect such positive results so soon. However, we have proven ourselves as Pakistan Software Board’s export remittances have reached record level.”

Haque lauded the performance of the Ministry of IT and Telecommunication and its affiliated organizations. Moreover, IT parks are being created across the country, along with Data Centers, policy on Cloud, cybersecurity, manufacturing of Smartphones, and much more.

IT Minister highlighted that the Universal Service Fund’s innumerable projects of providing broadband services and laying optical fiber cables in rural and remote areas of the country are a testament to their undeniable performance.

Summarizing these key initiatives and projects, he mentioned the tribal areas of Khyber Pakhtunkhwa (Ex-FATA) and the under-served areas of Balochistan that have witnessed record development projects worth Rs. 8.81 Billion.

These projects comprise broadband and optical fiber cables in the under-served and remote areas of Chaghi, Nowshki, Gwadar, Kech, and Panjgur. Whereas various other projects have been approved for Jhelum and Chakwal, covering an area of 86,773 sq km.

A total of Rs. 4.15 billion is being invested in the provision of voice and broadband services for approximately 88,477 people.

The Federal Minister emphasized that these Information and Communications Technology (ICT) projects ensure that we are concerned about the well-being of every citizen of Pakistan without any bias based on language, region, or province.

He reiterated his support and commitment to every resident of Pakistan. He added, “If we had a bias, we would never have initiated projects for Sindh, including cities like Karachi, Hyderabad, Sukkur, Khairpur, Larkana, Ghotki and Kashmore, however, these are all our cities, being part of Pakistan, and we endeavor to provide the latest facilities to our people for a digitally connected world.”

Speaking at the ceremony, Nadeem Khan, Acting CEO & Group Chief Financial Officer PTCL, said, “Being the national carrier, PTCL is the backbone of country’s communication infrastructure and primary internet service provider. We serve the people of Pakistan from large metropolitan cities to remote rural areas. We are glad to collaborate with USF for the establishment and operation of optical fiber connectivity in Ghotki, Kashmore, Sukkur, and Khairpur districts. Aligned with the vision of a Digital Pakistan, we are committed to play our role in supporting the underserved communities and empower them for a better future.”

While sharing his views at the ceremony, Haaris Mahmood Chaudhary, CEO USF, said, “I take the opportunity to say here that all these achievements have only been possible due to the constant efforts of the Government of Pakistan. Federal Minister and Secretary for IT and Telecommunication have been torchbearers of the vision for a “Digital Pakistan” and have enabled USF to transform the lives of people of the country.”

He said, “They have given us tremendous cooperation, help, and support, without which all this could not be achieved. I also want to congratulate the very hard-working team of PTCL, who are being awarded the projects worth Rs. 3 billion that aims at laying of 1,078 km of optic fiber cable to connect 140 un-served Union Councils & Towns, benefitting a population of around 4.7 million people. I am also very proud of my team at USF who has done its best to make these projects successful.”

Moreover, these projects will not only provide a digital highway for seamless broadband coverage to people residing in Ghotki, Kashmore, Sukkur, and Khairpur Districts but also improve the lives of people, create job opportunities for them, empower local communities, along with women, who can reap the benefits.