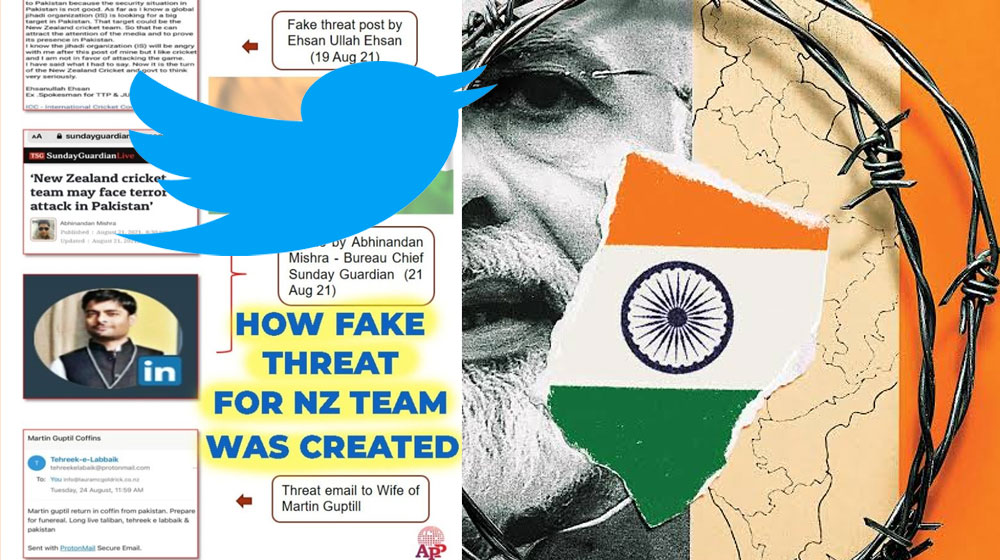 New Zealand recently backed out of their first tour to Pakistan in 18 years, citing a ‘credible and direct’ threat to them but did not share the details.

The minister proved with documented evidence that the threatening emails to a member of the New Zealand player originated from India.

Since this revelation, Pakistan Twitter has been rife with anti-India trends, with #IndiaSportsTerrorism and #IndiaBehindThreats trending on Twitter.

People, dejected and furious over the development, lashed out at the government of India for stooping so low.

Some of the tweets have been shared below:

India has not spared cricket in spreading shameful and lowest attitude, the families of New Zealand players from India have been given life threats by creating fake accounts and also made sports a target of terrorism. #IndianSportsTerrorism pic.twitter.com/DdGHoUus74

Another tweet said that the threats emanating from India sabotaged the series against New Zealand.

Indian fake email ids and devices are behind to sabotage the peace and damage Pak NZ cricket series.
The threat was from a device which was from India but the user was using vpn and device was showing Singapore country.#IndiaBehindThreats #IndianSportsTerrorism pic.twitter.com/PNDtt0no9x

A user believed that the nature and details of the threat should have been shared with Pakistan intelligence agencies before making a hasty decision.

The ID created under the name of Om Prakash Mishra, which fooled the intelligence agencies all over #NewZealand, we🇵🇰 were not given any information otherwise we would have exposed this drama of India on the first day #IndiaBehindThreats#IndianSportsTerrorism#IndiaBehindThreats

A tweet co-related the revelations of DisInfoLab with the current situation.

#IndianSportsTerrorism
World should know that once again Endia has been caught red handed after having been exposed by @DisinfoEU spreading fake news against Pak, This time NZ cricketers were sent fake mails with Pakistani names threatening to kill them in Pak.

“Bad neighbors,” was how one user put it.

Another called out India for harboring and spreading terrorism, even in sports.

Pakistan is Safe For Tourism and sports.

India is Destroying peace in every where even in sports.#IndianSportsTerrorism#IndiaBehindThreats