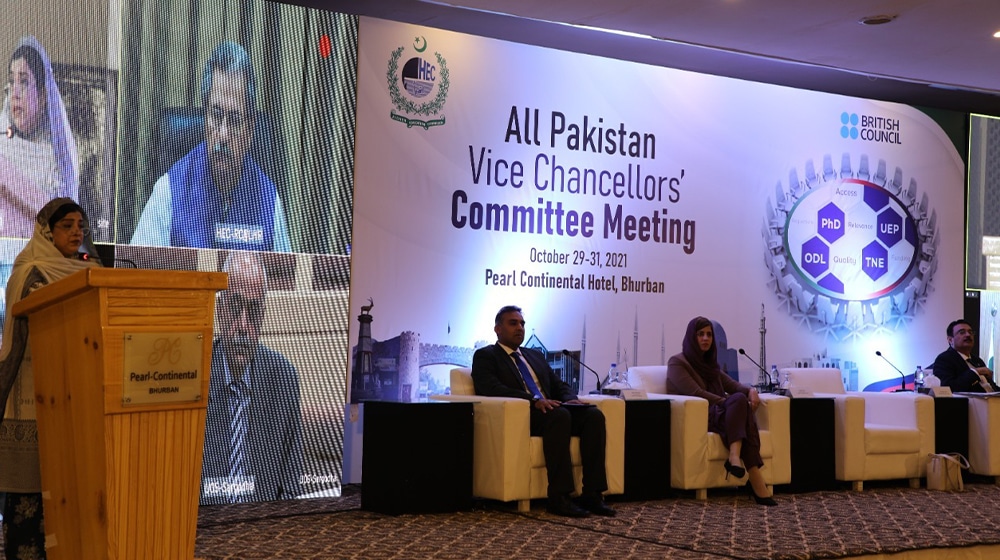 Minister for Federal Education and Professional Training, Shafqat Mahmood, has urged the heads of higher education institutions to focus on imparting education based on skill development as well as knowledge creation so as to prepare Pakistani students for national and international jobs markets.

The Minister was addressing on Friday the opening session of a three-day Vice-Chancellors Committee meeting being co-hosted by the Higher Education Commission and the British Council Pakistan at Bhurban. The meeting is being held to deliberate on HEC’s Policy on PhD Programs and the Undergraduate Education Policy. It will also bring under consideration the subjects like the Tree-10 bill, improving undergraduate education employability, Higher Education Development Program, and the National Academy of Higher Academy (NAHE) fellowship program, in addition to the launch of Online and Distance Learning (ODL) Policy.

Addressing the meeting online from Lahore, Shafqat Mahmood stressed that developing skill-oriented curricula and degree programs was a need of the hour, particularly in the context of rapid changes in employer needs. He laid special emphasis on the significance of measures needed to ensure constant improvement in the quality of education alongside an increase in access and an emphasis on the relevance of education and research.

“No doubt, Pakistan needs an increase in the number of universities as the country’s population is continuously growing, however, this should not happen at the cost of quality.” He also urged the Vice-Chancellors to pay special attention to the character-building of the students.

Shafqat Mahmood highlighted that around 10 million students benefited from the Tele-schools initiative, adding that the government was planning to dedicate at least five channels for education. He expressed satisfaction over the improvement in the performance of Pakistani universities as many universities recently made it to international rankings.

Zartaj Gul Wazir highlighted the salient features of the Tree-10 Graduation Legacy Act, 2021. He said that the government’s efforts to promote tree plantation were vital for future generations of Pakistan, adding that according to experts, Pakistan was highly prone to the negative impacts of climate change amidst urban flooding and famines and droughts in Thar.

Addressing the university heads, she emphasized that, “We need to convert your knowledge and experience into practical solutions for issues like hazards of climate change.” She said her Ministry wanted the educational institutions, especially students, to take ownership of the underlying concept of the bill for the promotion of plantation. She also underlined the universities’ role in promoting tolerance in society.

In her welcome address, Executive Director HEC, Dr. Shaista Sohail, said that the ecosystem for education must be synchronized with the national goals. She underlined that higher education must generate knowledge, produce research, promote entrepreneurship, innovation and commercialization, community engagement, and peace in society, as well as play a pivotal role in the economic uplift of a country.

The Executive Director highlighted the role of Vice-Chancellors in creating an enabling environment for teaching, learning, and innovation. She said the Vice-Chancellors are making their important contribution to academic, administrative, and financial management. She, however, stressed that there was a strong will needed to deal with the challenges in terms of university governance. She also dilated on the universities’ financial issues, endowment funds, student welfare funds, and medical schemes. She asserted that to deal with these issues, the institutions needed to adopt self-sustainability models and implement them with diligence.

Shedding light on the background of the HEC-BC partnership, Amir Ramzan said the British Council had developed a very strong working relationship with HEC over the last 15 years. “The aim of our collaborative work has been to provide equitable access to quality higher education to the average Pakistani student,” he added.