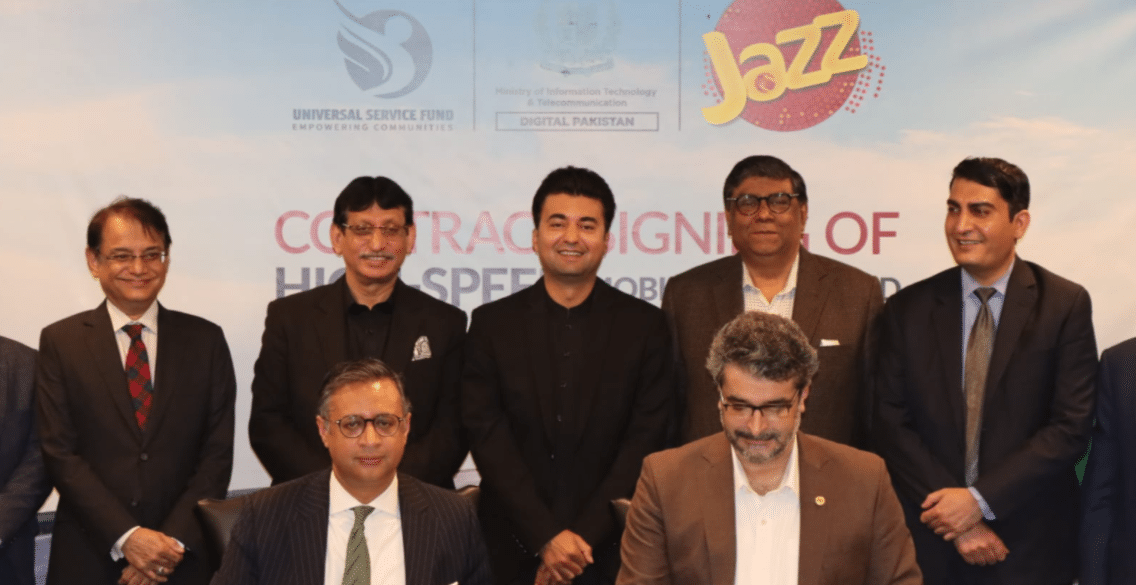 The Ministry of IT and Telecom, through the Universal Service Fund (USF), awarded contracts worth approximately Rs. 300 million to Jazz for providing High-Speed Mobile Broadband services on M3 and M5 Motorways.

This will not only provide connectivity to the commuters on the motorways but also enable immediate communication and rescue in case of an emergency. The present government is working relentlessly to provide maximum facilities to the citizens of Pakistan in order to bring ease into their lives.

While addressing the ceremony, Federal Minister for IT and Telecommunication, Syed Amin Ul Haque, said that through the M3 project, the USF will be providing high-speed mobile broadband access to 54.92km of an unserved road segment that passes through the districts of Sheikhupura, Nankana Sahib, Faisalabad, Toba Tek Singh, and Khanewal.

This will not only enable the commuters on the motorway but would also provide facilities to the residents of adjoining districts and villages. Similarly, through the second project, M5, high-speed mobile broadband coverage will be provided to 78.85km of an unserved road segment that passes through the districts of Multan, Bahawalpur, Rahim Yar Khan, Kashmore, Ghotki, and Sukkur.

The cost of awarded contracts is approximately Rs. 140 million for the M3 project and Rs. 154 million for the M5 project, and both projects will be completed in a span of 12 months. “It is pertinent to mention that through USF’s Motorways and National Highways program, 1,929 km of road segment length has been provided with broadband coverage. We are committed to providing uninterrupted mobile networks on all major highways of the country, and we are moving fast in this regard,” detailed the minister.

The Federal Minister for IT, at the occasion, slammed the Sindh government and said that the Local Government Act in Sindh is a black law which we rejected. “Where are the trillions of rupees of NFC and Annual development funds of the province? There is not a single union council of the province that can be called a model. The Sindh government is leading the people of the province to disaster,” he added. The Ministry of IT has launched IT and telecommunication projects worth Rs. 8.5 billion for Sindh without any discrimination, he further remarked.

Earlier, Haaris Mahmood Chaudhary, CEO of USF, in his introductory remarks, said, “The USF is committed in its resolve to empower the marginalized communities of Pakistan. These projects will provide broadband access to 134 km of unserved road segments on M3 and M5 and will be completed in 12 months.”

Aamir Ibrahim, CEO of Jazz, said in a message, “Jazz has invested $560 million during the last two years, mainly to expand its 4G footprint in rural and semi-urban areas. This is in line with our mission to bridge the digital divide and to collaborate with the government of Pakistan in helping realize the Digital Pakistan vision. Through this project, Jazz will power 134 km of two important motorways with 4G coverage.”