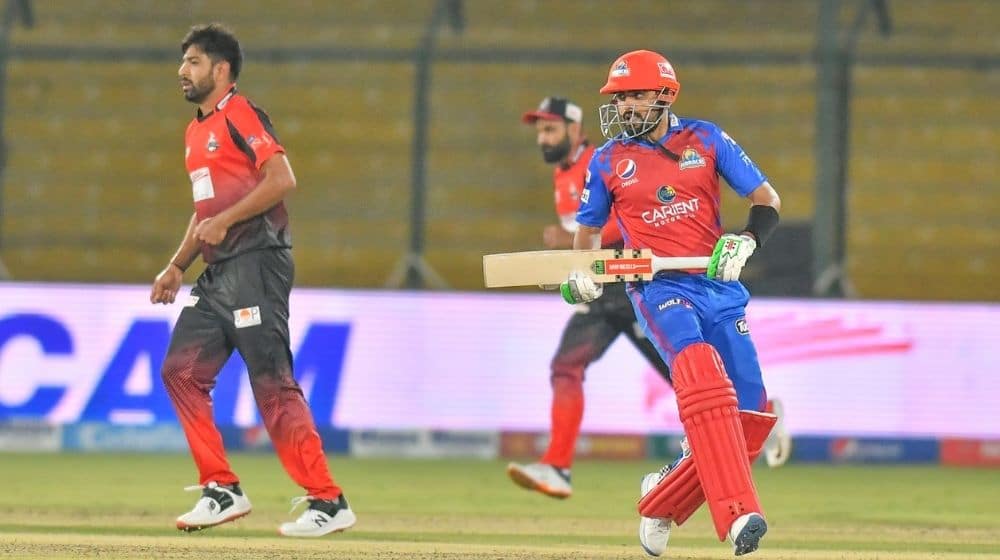 Lahore Qalandars registered their first victory of the competition as they defeated arch-rivals Karachi Kings by 6 wickets. Lahore have moved on to the fourth spot in the PSL points table while Karachi stay bottom of the table as they stay winless after their first three games in the tournament.

Karachi had a solid start to their innings as Sharjeel Khan and Babar Azam put on an outstanding opening stand of 84 runs. They did however lose momentum at the backend of the innings as they lost wickets at regular intervals and were unable to fully maximize the death overs. Karachi finished with a total of 170/7 with Sharjeel scoring a half-century.

Lahore got off to a formidable start to their innings as well with opener Fakhar Zaman taking the charge to Karachi’s lackluster bowling unit. Fakhar scored a scintillating century, his second of his career and his first in PSL history as he guided Lahore to a relatively comfortable chase. He was named as the player of the match for his magnificent performance.

Karachi will be hoping to turn around their fortunes quickly otherwise they are staring a possible elimination from the tournament early on in their campaign.

Arch-rivals Karachi Kings and Lahore Qalandars will lock horns in the sixth match of the PSL 2022 on Sunday, 30 January. The match, scheduled at Karachi’s National Stadium, will start at 7:30 pm PST.

Both Karachi and Lahore will be determined to bounce back quickly and overcome their disappointing losses at the start of the campaign. Karachi in particular has had a horrid start to PSL 2022 as they have lost their opening two encounters in the competition. Batting has been a huge point of concern in the first two matches for Karachi as they have been unable to score heavily on flat tracks. They scored 124/5 in their first match and they were bowled out for only 113 in their match against Quetta last night.

Karachi will be looking to make a few changes to their line-up in order to solidify their batting unit and bring in some more impetus to their lackluster bowling thus far. The experienced left-arm pacer, Mohammad Amir is expected to make a comeback after recovering from a back injury.

Meanwhile, Lahore Qalandars agonizingly lost their opening fixture to Multan Sultans as they were unable to defend their mammoth total of 206. Despite possessing one of the most fearsome bowling line-ups across the world, Lahore was unable to contain Multan’s batters. Captain, Shaheen Afridi will be looking for a much-improved performance from his bowling unit and add to the misery of Karachi Kings early on in the tournament.

Lahore is likely to go with the same line-up for this match.

Overall, the two sides have come face to face 13 times in the tournament. Kings have an upper hand as they have won 8 while Qalandars have won 4. They last faced each other on 17 June 2021 in Abu Dhabi; Karachi won it by 7 runs.

Karachi’s opener, Sharjeel Khan has had a less than impressive start to the tournament. Karachi will be hoping that Sharjeel can turn around his form quickly and return back to his best in the all-important clash. Sharjeel’s form at the top of the order will help Karachi in solving a lot of their problems with their batting unit.

Shaheen Afridi is one of the best fast bowlers in world cricket currently. The ICC cricketer of the year will be looking to get an early breakthrough and send panic in the Karachi dressing room early on in their innings. With the form of Karachi batters and with the skill of Shaheen Afridi, another batting collapse might be on the cards for Karachi.