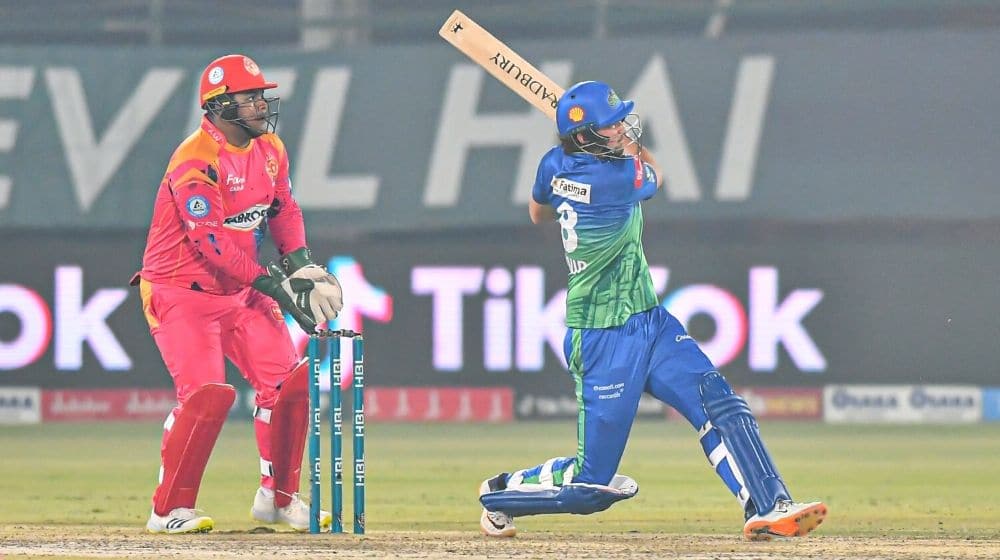 Multan Sultans registered their fourth consecutive victory in the tournament as they defeated Islamabad United by 20 runs. Multan extended their lead at the top of the PSL points table while Islamabad maintained their second spot despite losing the match.

Multan scored the highest total in this year’s PSL as the smashed United’s bowling unit all around National Stadium Karachi. Tim David and Rilee Rossouw set the stage on fire as they struck 6 sixes each. Multan posted 217/5 off their allotted 20 overs with David scoring 71 off 29 balls and Rossouw scoring 67 off 35 balls.

Islamabad United responded with some fireworks of their own. Captain Shadab Khan played one of the greatest PSL innings as he smashed 9 sixes in his scintillating innings of 91 off 42 balls. His magnificent innings was not enough as Multan’s bowlers picked up wickets at regular intervals. Khushdil Shah was the pick of the bowlers as he picked up 4 crucial wickets.

Tim David was named as the player of the match for his marvelous innings.

Islamabad United are set to take on invincible Multan Sultans in the eighth match of the Pakistan Super League’s (PSL) season seven on Tuesday. The match will be played at the iconic National Stadium, Karachi.

Reigning champions Multan Sultans have been unstoppable in this edition as well. They have won all three games they played in the tournament so far. A thrilling win last night against Quetta Gladiators will further boost their confidence.

The good thing about Multan is that they do not bank on their foreign players to perform. Their local players, including skipper Mohammad Rizwan, Shan Masood, Khushdil Shah, and Sohaib Maqsood, are all chipping in with valuable contributions.

The only sign of worry for ‘Junoobies’ is the form of Shahnawaz Dahani. The Larkana-born fast bowler, who was the highest wicket-taker in PSL 6, has failed to make an impact so far. It would be interesting to see if Rizwan fields him tonight against the destructive batting lineup of Islamabad or gives him rest.

On the other side, Islamabad United rely heavily on their top order, consisting of all foreign players; Paul Stirling, Alex Hales, and Rahmanullah Gurbaz. They have all been in great touch. The way they dismantled Peshawar Zalmi’s bowling in the previous game speaks volumes of their capabilities.

Besides, United also have Azam Khan and Asif Ali. Both of them can hit sixes at will. Faheem Ashraf and Shadab Khan are also useful with the bat.

Their pace battery has Hasan Ali, Mohammad Wasim Junior, and Marchant de Lange besides having the assistance of spinners Shadab Khan and Mubasir Khan.

With five wins in nine games, Islamabad United have an upper hand in head-to-head clashes against Multan Sultans, who have four victories. The two sides last faced each other in the first semi-final of the PSL 6 on 21 June 2021 in Abu Dhabi, which Sultans won by 31 runs.

Islamabad openers Alex Hales and Paul Stirling are in red-hot form. They made a mockery of Peshawar Zalmi bowlers the other day and chased down the 169-run target with 9 wickets and almost five overs to spare. A similar show is expected from them tonight.

As for Multan, their opener Shan Masood has re-introduced himself as a quality T20 opener, and Multan will be hoping that he continues his rich vein of form throughout the tournament.

Shan’s 58-ball 88 propelled Sultans to a fighting total last night against Quetta Gladiators. His top form, along with Rizwan at the top of the order, has been one of the major factors behind Multan’s early success in the tournament.