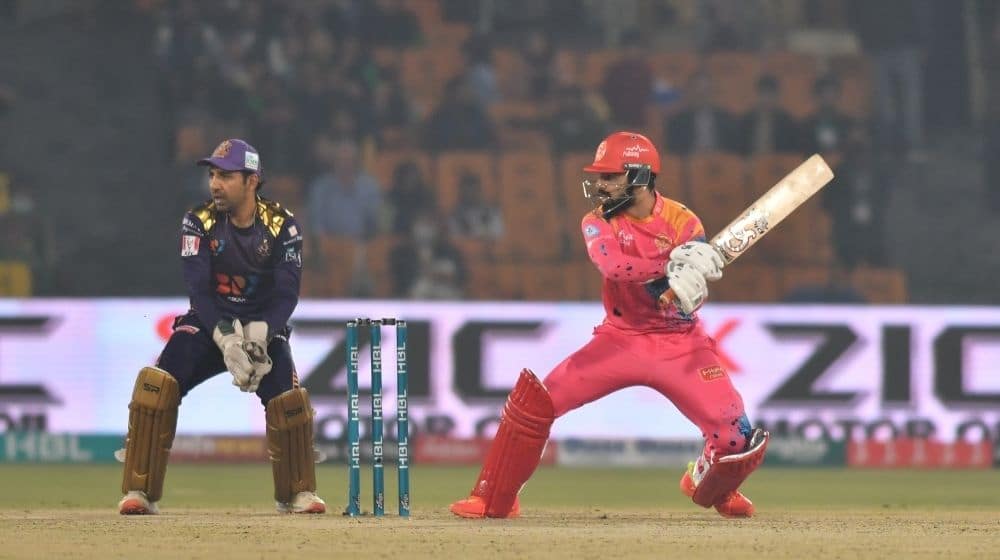 Quetta Gladiators pulled off yet another incredible run-chase as they defeated Islamabad United by 5 wickets. As a result, Quetta are level on points with Islamabad United but stay on the fourth spot due to their inferior net run rate.

Islamabad United got off to a solid start courtesy their openers, Alex Hales and Rahmanullah Gurbaz. They lost their way in the middle phase of the innings as they lost wickets quickly but they made a solid comeback as all-rounder Faheem Ashraf scored a breathtaking half-century to take their total to 199/8.

Quetta got off to a flyer of their own as Jason Roy dismantled Islamabad’s bowling unit. Islamabad pulled yet another comeback as Shadab Khan picked up three crucial wickets to restrict the Quetta batters. Sarfaraz Ahmed and Umar Akmal took on the charge at the end of the innings and timed their run-chase to perfection.

Sarfaraz was named as the player of the match for his top-class half-century. He scored 50 runs off 32 balls as he led Quetta to victory

Islamabad United will face Quetta Gladiators in the 18th match of the PSL 2022 on Saturday, 12 February. The match, scheduled at Lahore’s Gaddafi Stadium, will start at 7:30 pm PKT.

Islamabad United will look to regain their second spot in the PSL points table as they face a rejuvenated Quetta Gladiators in a high-octane clash in PSL 7. A win for Islamabad will take them over Lahore Qalandars due to their superior net run rate while a win for Quetta will take them level on points with Islamabad United at the fourth spot.

Islamabad were exceptional in their previous outing in PSL as they defeated Karachi Kings by 42 runs at National Stadium Karachi. They will be looking to put in a similar performance in Lahore and take one step closer to their 6th PSL play-offs. They will however miss the services of explosive opener Paul Stirling who has flown back to Ireland for national duty.

Quetta were also magnifcent in their previous outing thanks to a wonderful century by star batter, Jason Roy. They look like a formidable outfit with the likes of Roy and Vince at the top of the order and will be looking to carry the momentum in the all-important clash. Quetta too will miss the services of their star all-rounder Mohammad Nawaz who has been ruled out of action due to an injury.

Both the teams will have to make one forced change to their line-up. Otherwise, they will look to go with the same line-up as their previous match.

Overall, the two sides have come face to face 14 times in the tournament. Both the teams have won 7 matches each. They last played against each other in PSL 7 on 3 February 2022 at National Stadium Karachi. Islamabad won the match by 43 runs.

Shadab Khan has been the player of the tournament so far with his explosive batting and exquisite bowling. He is the second-highest six-hitter and the leading wicket-taker in the tournament so far. Islamabad will be hoping that he continues his rich vein of form and lead them to a victory.

Jason Roy took apart the world-class bowling of Lahore Qalandars and scored a scintillating century in his first match in the competition. Quetta will once again depend on him to provide a formidable start and set the tone for the rest of their batting unit.