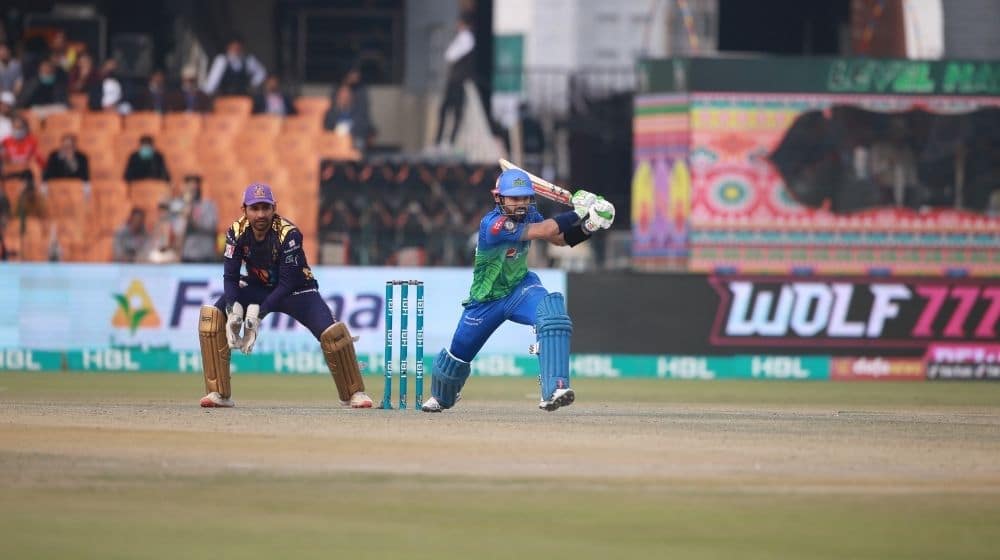 Multan Sultans registered the biggest win in PSL history as they defeated Quetta by 117 runs. As a result, Quetta now have a mountain to climb in order to qualify for the PSL play-offs while Multan extended their lead at the top of the PSL points table.

Multan got off to an explosive start yet again with Shan Masood and Mohammad Rizwan scoring scintillating half-centuries to set up the perfect platform for the rets of the batting unit. Rilee Rossouw stepped in and smashed the Quetta bowling unit all over the park while Rizwan continued his brilliant innings. Multan managed to put on the highest total this season and the second-highest total in PSL history as they scored 245/3.

Quetta got off to a poor start and never really recovered. Despite a blistering half-century by Umar Akmal, none of the rest of the batters were able to contribute as they were bundled out for 128. Quetta lost the match by 117 runs.

Rilee Rossouw was named as the player of the match for his scintillating knock. Rossouw scored 71 runs of 26 balls including 9 fours and 4 sixes.

Quetta Gladiators and table-toppers Multan Sultans will lock horns in the 25th match of the Pakistan Super League (PSL) 7. The two teams will battle it out against each other at the Gaddafi Stadium, Lahore at 2:30 pm PKT on Friday, 18 February. The updated points table looks like this:

Seven out of eight wins have reduced the pressure on Muhammad Rizwan-led Multan Sultans as they have already booked the seat for the playoffs stage. On the other hand, Quetta Gladiators, under the leadership of Sarfaraz Ahmed, will start the battle with a lot of pressure on their shoulders as they are at the 5th spot on the points table.

Peshawar Zalmi’s 10 runs victory against Islamabad United has forced Purple Force to stay on the 5th spot even in the winning case. If Gladiators win today’s match, they will remain on the same spot and will be waiting for their last clash against Karachi Kings on February 20. Also, if Quetta wins both their matches, it will be the run rate that will decide their fate for the play-off stage.

Overall, the two teams have faced each other 9 times in the tournament, and both the teams have won 4 matches. while one match has ended in No Result. They last faced each other in the 7th match of PSL 7 on 31 January 2022 at National Stadium Karachi which Multan Sultans won by 6 runs.

Will Smeed who smashed 99 runs from 60 balls against Peshawar Zalmi will be expected to display the same performance in another important match. On the other hand, Jason Roy, who failed against Zalmi, will have to step up against Multan Sultans at the crucial stage of the tournament.

For Multan Sultans, Mohammad Rizwan and Shan Masood will be expected to maintain their form ahead of the playoffs stage. The opening pair is in supreme form and they can lead the side further in the league.