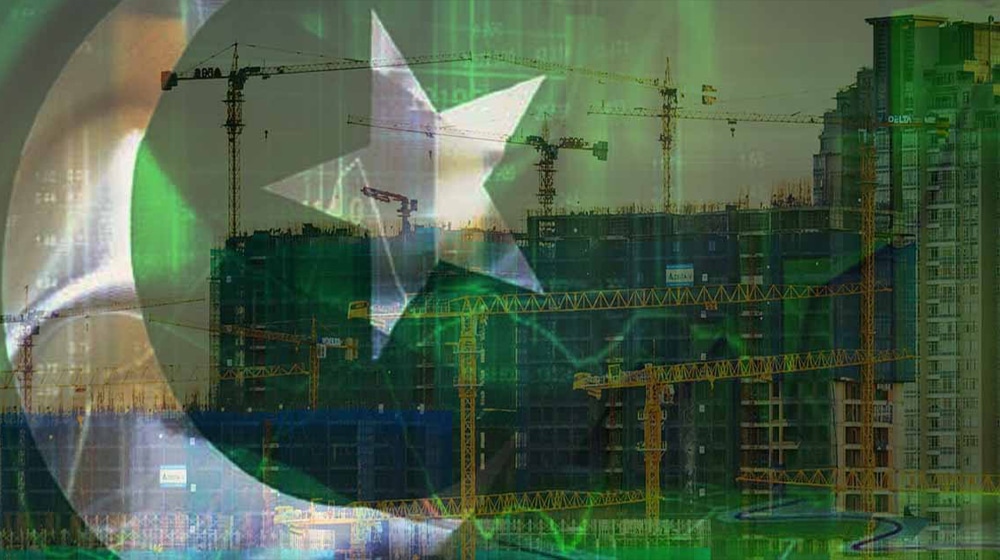 The new deal with the International Monetary Fund (IMF) should play a key role in stabilizing forex reserves and positively impact the Pakistani Rupee (PKR).

While this would prove beneficial for Pakistan, a report compiled by Arif Habib Limited (AHL) estimates that the measures undertaken by the government will possibly result in higher inflation and further tightening of the monetary policy.

In a recent development, Pakistani authorities met representatives of the International Monetary Fund (IMF) in Doha for discussions over the seventh review of the lender’s Extended Fund Facility (EFF). In this regard, the IMF, in a brief statement, acknowledged the considerable progress made by Pakistan, welcoming the recent policy rate hike. However, the agency highlighted concerns over the policy deviations made on the fiscal front, including subsidies announced back in February 2022.

The statement concluded with an emphasis on the need for corrective and concrete policy actions to achieve program objectives. Following this, the government announced a partial reversal of the subsidy package on petroleum products, hiking MS, HSD, Kerosene, and LDO prices by Rs. 30 per liter, taking the per liter price to Rs. 179.86, Rs. 174.15, Rs. 155.56, and Rs. 148.31, respectively. In this report, the AHL report has highlighted the potential impact of this decision on the overall economy, emphasizing inflation and the IMF deal.

The beat goes on with Pakistan’s inflation continuing to inch up with each passing month. The average inflation for 10MFY22 stands at 11.04 percent YoY vis-à-vis 8.62 percent YoY in SPLY.

This YoY uptick so far has primarily been led by Food (17 percent YoY) and Transport (28 percent YoY) indices. With the recent development of partial reversal of petroleum subsidy and shortage of wheat, inflation is not declining anytime soon. This sharp surge in petroleum prices, post-subsidy reversal, will steer the inflationary pressure in the following months. The report estimates show an approximate 1.2 percent impact on June 2022 headline number due to this reversal only.

It is pertinent to mention here that in the recent MPS, SBP highlighted the need for urgent fiscal consolidation, to help relieve pressure on inflation, market rates, and external account, by rolling back the subsidy package, while providing adequate and targeted social protection to the most vulnerable.

In addition to energy, food prices have been on the boil internationally, and this is one of the reasons given by our authorities for stubbornly high food inflation. Internationally, there are several commodities like wheat, coal, edible oil, and DAP, which are already trading at premium prices compared to their historical prices.

Wheat flour has a weightage of 3.2 percent in CPI index and local price per kg of PKR 49 (price details extracted from sensitive price index), whereas the international price of wheat is $425/t, translating into Rs. 84.9/kg (excluding duty, sales tax, other charges, and duties to protect local industries).

With an insufficient inventory position of wheat, the government has resorted to importing it to meet the current need and eventually create a buffer stock for the coming months. Moreover, in the fiscal year 2021-22 to date, Pakistan has imported palm oil worth $2.79 billion, which is the largest constituent under food group imports. There was an increase in international palm oil prices by 72 percent FYTD from $912/mt to $1,571/mt, the report noted.

However, with imported inflation pushing inflation expectations higher, the chances are that domestic inflation will also pick up eventually.

Moreover, tomatoes, onions, potatoes, milk, rice, fresh vegetables, and most food items that fall under the category of ‘essentials’ are price inelastic. That means, their demand remains intact even if the prices rise, thus, contributing to the supply-side inflation.

All said, with the high base effect coming into play in the second half of CY22, headline numbers of inflation may take a breather. Having said that, the possibility of loosening of Monetary Policy in the latter part of the FY23 could be a possibility if the authorities continue to take measures to curtail inflationary pressures.

At a time when our economy faces pressing challenges such as the weakening external account with mounting risks of depreciation of the PKR amid reduced import cover (less than 3 months), bloating fiscal deficit with risks associated with delayed energy reforms and unfunded subsidies, it may once again keep away the central bank from going generous, with the monetary policy expected to be further tightened in the months to come by around 100-150bps.

Since the release of the last MPS in May’22, in which SBP increased the rate by 150bps to 13.75 percent, PIB yields across all tenors have declined considerably by 41- 47 bps.

Similarly, T-Bill yields have reduced by 5-20 bps. This was mainly due to the fact that the market had already factored in a rate hike in anticipation.

However, in the last PIB auction held on 25 May, major participation was skewed towards 10-year PIBs (40 percent of the total amount), while most of the amount accepted was in the 5-year tenor. Moreover, the cut-off yield of 3-year PIBs increased by 70 bps, while a 24 bps increase was seen in the cut-off yield of the 5-year paper. The uptick in money market yields further justifies our bullishness.

The State Bank of Pakistan’s (SBP) decision to increase the policy rate by 150 bps in the last policy does not seem like a one-off event, instead, it signals a further rate hike down the road. Indeed the SBP decision to further continue rate-hiking will primarily be dependent on inflation trending upwards, along with other economic indicators, including external account position, international prices, and currency movement.

To effectively manage monetary policy and have a minimum externality effect on the economy, the SBP is focusing on the long-term price pressure that exists in the economy and addressing it with the recent stances taken by the Bank. In addition, there has been a sharp rise in Currency-in-Circulation (CiC) and +15 percent year to date. Therefore, with SBP rendering to tighten the rates, it would be productive to control the money supply and result in sustained lower core inflation.

As reiterated time and again by SBP and other authorities, the main reason for the impending approval of the seventh review of EFF was the removal of the subsidy package provided by the outgoing government.

This included subsidy on petroleum products is costing the exchequer around Rs. 120 billion a month. With the recent measure taken by the government to reverse petroleum subsidy partially, the IMF bailout seems to be a done deal.

Further, this would prove beneficial for Pakistan as the long-impending approval from the IMF for the seventh review (worth ~$900 million) would unlock more inflows from other multilateral donors as well (WB and ADB). Further, with the resumption of EFF program, Pakistan’s credit ratings may also take a positive turn, as may be highlighted by the rating agencies on timely availability of the much-needed support to the country’s external account. 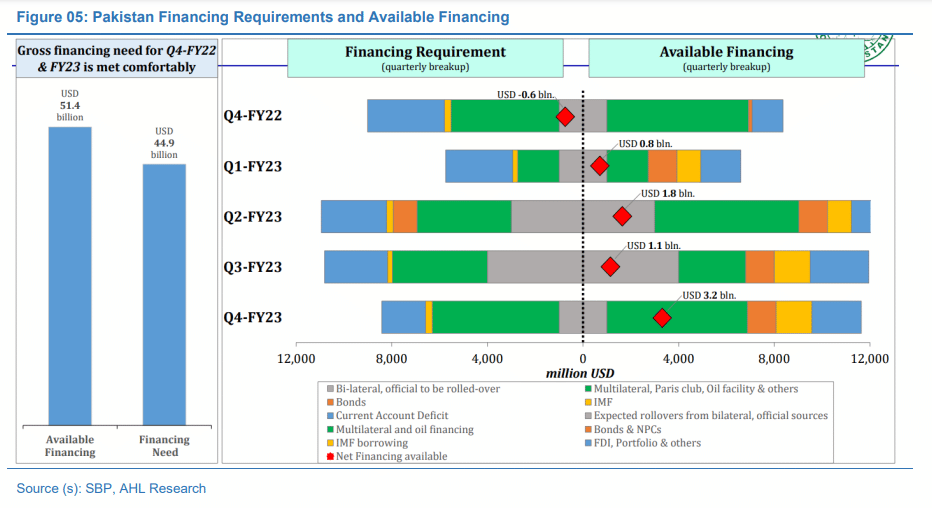 The new deal with the IMF should play a key role in stabilizing forex reserves and positively impact PKR. However, on the flip side, the measures undertaken by the authorities will result in higher inflation and subsequently further tightening of the monetary policy.

Pakistani equities have already been rallying on the potential IMF funding arrangements. Additionally, Saudi Arabia’s $3 billion, Chinese (expected) rollover amount worth $2.4 billion, and other bilateral and multilateral flows should provide a needed breather to the country’s externals. 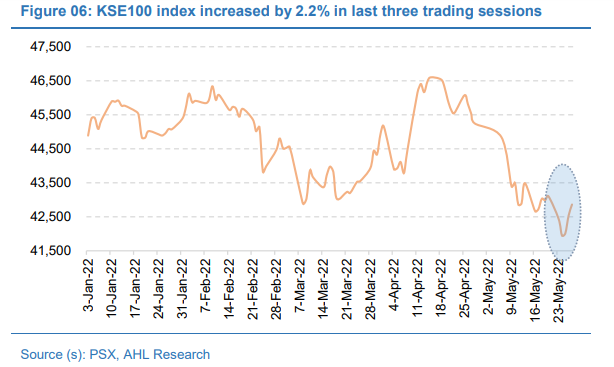 These developments would just meet investor expectations, and therefore, should provide further confidence to Pakistan’s capital market in general.