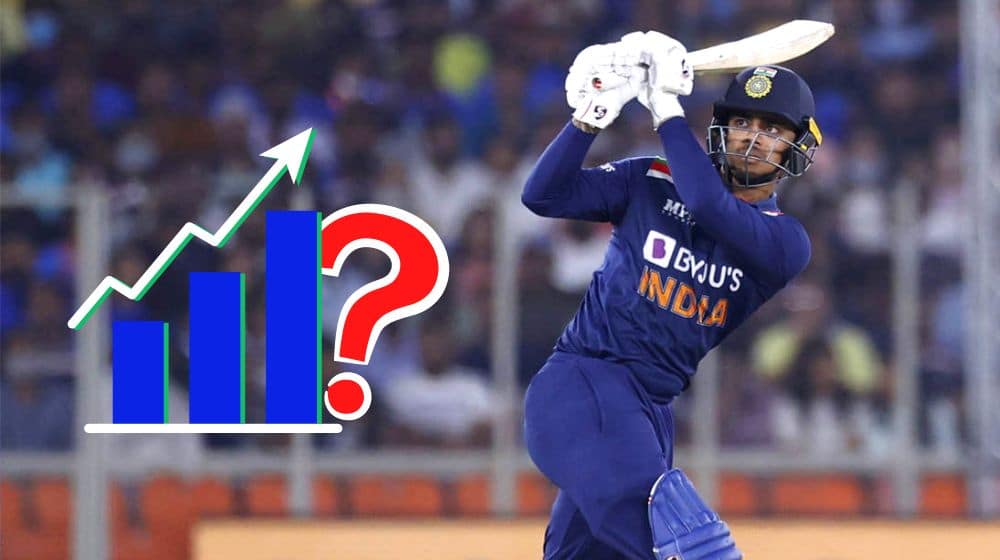 India’s young opening batter, Ishan Kishan climbed up a massive 68 places as he moved to the 7th spot in the latest ICC T20I batter rankings.

Last week, Kishan was ranked number 76 in the world, and in a space of three innings, where he scored two half-centuries, he has broken into the top 10 in the shortest format of the game.

While Kishan has been sublime in the T20I series between South Africa and India, registering scores of 76, 34, and 54 in the first three T20Is respectively, a jump from the 76th spot to the top 10 is unprecedented. His 164 runs in 3 innings at an average of 54.66 did not warrant a place in the top 10.

In comparison, Pakistan wicket-keeper batter, Mohammad Rizwan, currently the second-ranked T20I batter in the world, did not witness such a meteoric rise in his rankings despite piling on the runs consistently throughout last year.

India's 🇮🇳 Ishan Kishan has jumped a staggering 6️⃣8️⃣ places to 7th in ICC T20I rankings with just 2️⃣ half-centuries.
Is this even possible❓ ICC has faced criticism over biased rankings in the past as well❗#Pakistan #T20I #IshanKishan #prosports #cricket #ICC #ICCRankings pic.twitter.com/wUmU6keNvw

In addition to this, South African middle-order batter, Rassie van der Dussen had scored 75 runs in the first T20I as he helped South African chase down a mammoth target of 212 runs. Although he only scored 2 runs in the next 2 T20Is, he slipped from 7th to 8th, making way for Kishan at 7th. Similarly, Sri Lanka’s Pathum Nissanka scored 66 runs in the three T20Is against Australia, and he too slipped down from 8th to 9th in a space of one week.

Furthermore, Australia’s explosive all-rounder, Mitchell Marsh, despite being a consistent performer in T20Is over the past year has been lingering at the 27th spot. Marsh has scored 571 runs at an average of 40.78 in his previous 16 innings in T20Is. His heroics also won Australia the 2021 T20 World Cup in UAE.

This does not paint a good picture for the International Cricket Council (ICC) and rumors of the governing body being favorable towards India might just have more truth to it.